An Indian Spy in Pakistan?

Hamza Fareed Malik explores the curious case of Khulbushan Jadhav, a supposed Indian spy caught in Pakistan, and the impact this could have on the long history of tension between India and Pakistan. 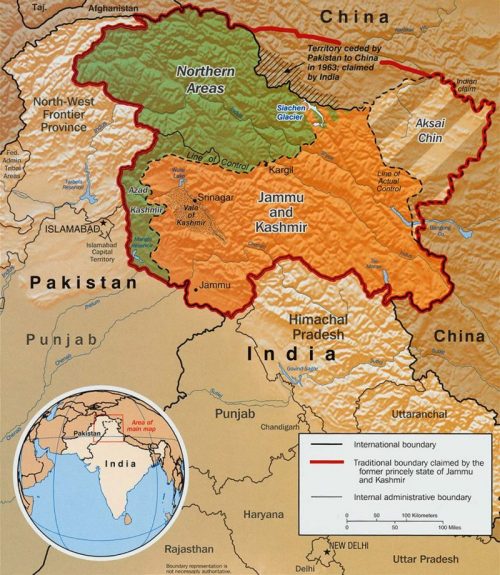 A long history of tension between India and Pakistan

Pakistan and India are two nuclear powers eager to out shine each other at every possible opportunity. For them, it doesn’t get any tenser than when the wrong person crosses onto the other side of the border. We saw a brief glimpse of a situation like this in February 2019. An Indian Air Force pilot flew across the Line of Control, the de-facto border between Indian and Pakistani-controlled Kashmir. In response, Pakistan shot down, held captive, and then returned said pilot.

The tensions between the two rival nations at the time were incredible. The standoff was reminiscent of Cold War-era USA and Russia, with both countries nearing the brink of war. Tensions have arisen frequently over Kashmir; the fiercest topic of contention between India and Pakistan existing since both nations gained independence from Britain in 1947. The relationship is the most strained it has ever been after India revoked Article 370 of the Indian Constitution, an article which had granted Kashmir special status and autonomy over internal administration.

Another pre-existing quandary which has been the topic of heated debate, especially post-9/11, has been that of malicious Indian interference in Pakistan, and vice versa. Both Islamabad and New Delhi have repeatedly accused each other of espionage, terrorism, or otherwise destabilisation across borders.

India has frequently accused Pakistan of training and sending terrorists from Pakistan to India, a claim echoed in the aftermath of the 2008 Mumbai Attacks. Pakistan similarly blames India for backing separatist and terrorist insurgencies in Pakistan, such as the Balochistan Liberation Army. These insurgencies have persisted in Pakistan since the rise of Pakistani dictator Muhammad Zia-ul-Haq and the fall of the Soviet Union. They also gained further traction after 9/11.

However, it appears that Pakistan’s accusations may not have been mere accusations. 3 years ago, Pakistan arrested an alleged Indian spy on its grounds.

Both Islamabad and New Delhi have contradicted each other at every step of this story. Only one fact has been agreed upon by both countries: Pakistan has in its custody an Indian national named Kulbhushan Jadhav. Everything else differs depending on whether Islamabad is answering the questions or New Delhi.

This purported spy has been the subject of much publicity over the past 3 years. However, there has been a significant increase in media attention after the International Court of Justice ruled on this case last month. Before the ruling can be discussed, it is worthwhile to explore the background leading up to that.

According to Pakistan, Jadhav is a serving commander in the Indian Navy working as a spy for India’s foreign intelligence agency, the Research and Analysis Wing (RAW). Pakistan maintains that he was arrested in March 2016 in Balochistan – the largest, and most turbulent, province of Pakistan – on charges of terrorism and spying on behalf of RAW, after a counter-intelligence operation was carried out in the region by security forces.

India, on the other hand, claims that Jadhav is a retired Indian naval officer with no links to the Indian government. Rather, he took premature retirement but was abducted from Iran by a terrorist group and then given to the Pakistani Army. India also maintains that his presence in Pakistan has never been credibly explained. Therein lays a factual quagmire with different stories depending on whose side one chooses to follow.

A few weeks after Jadhav’s arrest, his video confession was released to the public by the Inter-Services Public Relations, the media wing of the Pakistani Armed Forces. The confession consisted of him facing a camera and stating that he was a serving officer of the Indian Navy. Furthermore, he had been directing illegal activities in Karachi on the behest of RAW since 2013 – resulting in the deterioration of law and order in Pakistan’s largest and most populous city.

Jadhav also confessed to meeting with Baloch insurgents to carry out activities of a criminal nature which had led to the deaths of Pakistani citizens. Continuing to acknowledge that RAW had been involved with and financed the Balochistan Liberation Army (BLA), a global terrorist organisation based in Afghanistan and operating in Balochistan. Since 2004, The BLA has been waging a violent battle against Pakistan. They have upheld the right to self-determination of the Baloch people, demanded the separation of Balochistan from Pakistan, and been involved in the ethnic-cleansing of non-Baloch minorities in the province.

Like dropping a bomb on an unsuspecting population, the video sent shockwaves throughout the country and beyond. Pakistan’s constant assertion that outside forces had been plotting against it seemed to gain credibility. Jadhav was now seen as the biggest proof of Indian intrusion in Pakistan. New Delhi responded the same day and issued a statement acknowledging Jadhav as an Indian national but with no links to the Indian government. India, instead, claimed that the video was a farce and that they had not been informed of the arrest prior to the confession being released.

All the Eggs in Islamabad’s Basket

Itchy trigger-fingers aside, this spy could place all the eggs in Islamabad’s basket. Pakistan presented Jadhav on the global stage as India’s puppet in a wider network of intricate spies and terrorists. This, in turn, showed that Islamabad’s repeated insistence of their genuine efforts to combat terrorism had in fact been curtailed by foreign involvement and support. New Delhi maintains that Pakistan is desperate to put the blame of its own problems on India and that the confessional video was doctored. However, this is not the first time an Indian spy has been caught in Pakistan. Several other very similar cases have transpired over the past few decades. For example, infamous Indian spies and RAW agents like Kashmir Singh and Ravindra Kaushik were also convicted of espionage.

For two of the fiercest rivals in the geo-political world, the inclination to undermine each other in every way possible is ever-present.  Groups like the BLA have been a persistent issue for Pakistan. Security forces have failed to eradicate what should have been a scattered and ill-financed resistance group, but which turned out to be a foreign-funded weapon of destabilization. For Islamabad, this spy turned out to be ammunition against New Delhi and more fuel for an already raging fire.

In January 2017, the Pakistani Ambassador to the United Nations presented a dossier to the UN Secretary-General. This dossier contained information about Jadhav’s arrest and India’s involvement in terrorism in Pakistan. Jadhav was then sentenced to death by a military court for espionage and instigating terrorism in Pakistan on April 10th, 2017. The sentence was welcomed in the country for the most part but across the border, the reaction was fierce. India questioned the fairness of the trial and dubbed the sentence “pre-meditated murder.”

In May 2017, India approached the ICJ, accusing Pakistan of violating the Geneva Convention. They asked for Jadhav’s sentence to be quashed and that he be released to India. The ICJ did not give their verdict on the case until July 17th, 2019. It ruled that Pakistan had violated Article 36 of the Geneva Convention but rejected India’s demand for Jadhav’s release. Pakistan was asked to effectively review the death sentence and allow consular access to be granted to India. The decision was welcomed by both countries.

For now, the story of Jadhav continues. Islamabad and New Delhi are both thoroughly committed to ensuring that they come out as victors in the end. The conclusion of this scenario will be another crucial factor in determining which nuclear power comes out on top again. More so than punishing a terrorist spy for Pakistan or saving an innocent citizen for India, the fate of Jadhav will have a direct effect on relations between the two countries for years to come and will leave a mark on history.

Will Pakistan finally vindicate itself and prove India to be the belligerently destructive enemy it has so often accused it of being, or will India bring this man home and show Pakistan to be the volatile blame-shifting foe it has long considered it to be? The events of February 2019 are still fresh for India. An unexpected move on Kashmir has pitted it against Pakistan again. The fight for supremacy rages on, but this time, Pakistan holds the cards. How long that lasts though, remains to be seen. To make politics out of a man’s life might seem callous, but that is exactly what this whole situation is. Whenever there is anything concerning Islamabad and New Delhi, there must always be a winner and a loser.

If you enjoyed reading this article, check out more Politics and Economics articles here.