Mongols, Merchants and The Myth of European Globalisation 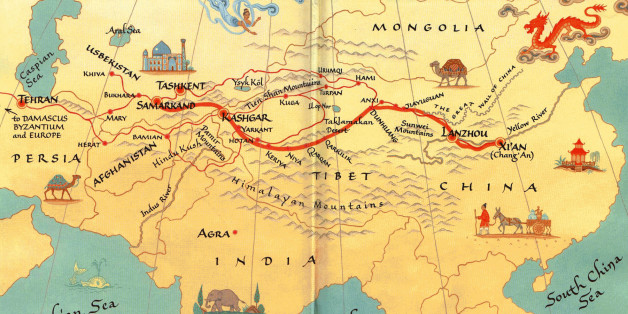 Most Westerners tend to say the Age of Discovery marks the dawn of globalisation. Seldom do we question such narrative, because of the lack of a balanced view of the world in academia and beyond. What if I were to tell you globalisation started much earlier however? In a time that fully encompasses today’s understanding of the term – world-wide rapid expansion of trade and cultural exchange – and yet regrettably is a lesser known and lesser studied part of history.

In recent years, some historians are finding evidence that globalisation started with 13th century Mongols – long before Columbus discovered America, da Gama discovered India or Dias discovered the Cape of Good Hope. It started when Genghis Khan, the first emperor of the Mongolian Empire, founded this ‘largest contiguous land empire in history’ (roughly 20% of the world’s land area). His descendants expanded it by doubling its size, adding southern China, all of Iran, most of Turkey and even half of Poland. At full size it united almost half of the world’s population. Such a large empire encouraged trade and cultural interaction in manners that were very similar to today’s concept of globalisation.

Despite being only known by many for his brutality, Genghis Khan was hailed for bringing cultures and trade across and between continents. He brought the Silk Route under one cohesive political centre, which is known as Pax Mongolica, allowing relative peace and stability to be established along the route. He gave priority to logistics: building roads, bridges and ferries, including implemented a massive programme of state caravanserais (multi-purpose roadside inns), because he believed that the merchant class was important, and that they could move goods faster than the army. Under the Mongol’s protection, trade truly prospered, where there were no significant trade barriers on the road all the way from the Mediterranean to China.

The Mongols were not driven by ideology or any messianic impulse however, only by the hunger to amass wealth. They had nothing in the way of deeply ingrained ideas of politics, economics, or culture to spread abroad or even to rule internally, given Mongolia’s disparate nomadic past. Hence, they did not and could not impose political ideology, cultural and religious ideas on others but rather created an environment of extreme tolerance. So long as the basic governing regime wasn’t fundamentally challenged, trade and culture were pretty much protected.

For instances, some see that the art movement that followed the Mongolian invasion in China – the “Chinese Renaissance” as some call it – flourished because artists did not have to work for political ends anymore, they were free to simply create. This was unlike it had been previously during the Tang and Song dynasties, where most artists were hired by government officials or required to promote certain ideologies in their work. Chinese textiles and painting becoming more popular in Persia, and Iranian tile work began to reflect Chinese popular images such as the phoenix and dragon. Cultures from half a world away had begun to intermingle and mix. Genghis made a point to employ talented people from different geographical areas. He inserted some commanders of defeated Muslim legions into his own army. He would retain astronomers, engineers, and doctors from all parts of his conquered empire. Some would even became close advisors to him. The expansion of trade and communication and the intermixing of people, ideas and cultures, had allowed all manner of exchanges. Cuisines were mixed, literature from different cultures spread, maps of the empire were produced and refined, dictionaries were translated into multiple languages. Globalisation, under Genghis Khan and his descendants, was taken to an unprecedented scale. Contrary to what many Westerners believe – that the most innovative ideas and technologies originated in Europe or America – the printing press, gunpowder, and the compass, important innovations that changed the world, all came to the West during the heyday of the Mongol Empire. Subsequently, the Europeans had a taste of the East by this time. They learned to appreciate the silk, porcelain, tea, spices and more goods from the East. Ultimately it was these exchanges from the Mongol Empire that inspired the European Age of Discovery of the 15th century.

This is a potent example of why we should question the oft repeated myth that everything was started by the West when it clearly isn’t. When looking at history, especially the history of current trends and ideas, we must always strive to look beyond our own present and past to examine what has happened from a truly global perspective.

Moreover though, it should make us reflect on Asia’s place in the world; its past, present and future. With Asia’s rise to power in recent years, in a trend that will continue to dominate this century, it is integral that we gain a better understanding of this continent and its role in this world. Its history is an inseparable part of that. Maybe then when western media talks of the Asian continent’s rise to economic and political dominance, they should not say this is something altogether new, simply a reawakening.

Neville Lai is a fourth year PPE student, interested in the shifting political dynamics between west and east