No green and pleasant land here: the Gazan humanitarian crisis in perspective 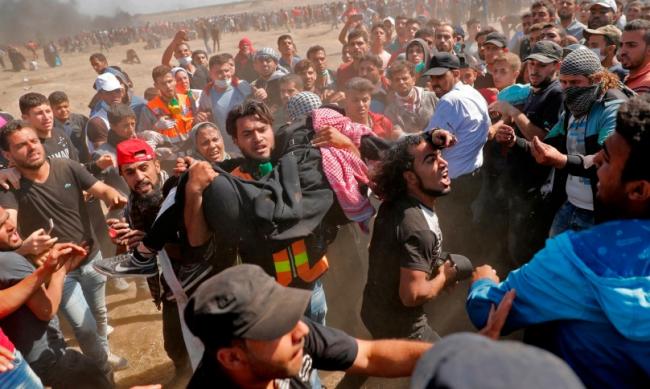 Protests along the Gazan border with Israel

For the sake of the Palestinians and Israelis alike, the humanitarian crisis in Gaza has to be seriously addressed by the international community. The massacure of unarmed Pelstinians at the Gaza-Israel Border has left at least 60 Palestinians killed and at least no less than 1700 injured. Eight of the dead were children. While the demonstrations have intensified over US embassy relocation from Tel Aviv to Jerusalem, the start of protests was on 30 March 2018.

The protests also coincide with the mid-May of every year, which marks the Nakba “catastrophe” Day for Palestinians due to the creation of the state of Israel 70 years ago. The same day is celebrated by Israelis as the Independence Day for the same reason.

All this happened during a celebration for “peace” in Jerusalem. But has Israel responded in kind?

There are two sides to the story. Sometimes it sounds that Israelis and Palestinians are speaking about two different events on two different galaxies. On the one hand, Palestinian officials accused Israel of committing a “horrific massacre”. On the other, Israeli Defence Forces (FDI) accused the militant group Hamas of leading a “terrorist operation” and inciting protestors to conduct what Israel described as “terror attacks”. 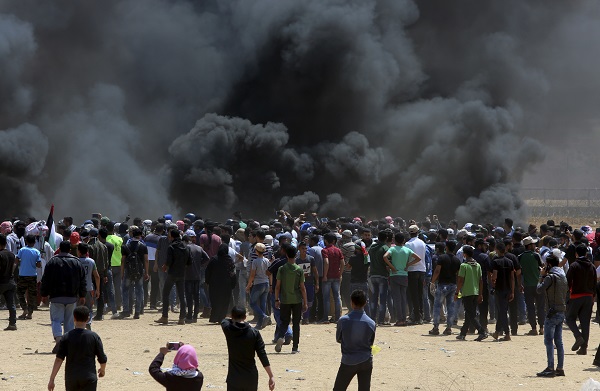 Protests in Gaza along the border with Israel

“This is another horrific example of the Israeli military using excessive force and live ammunition in a totally deplorable way. This is a violation of international standards, in some instances committing what appear to be willful killings constituting war crimes.”

While Palestinians were being killed in real time less than 80 kilometers far from Jerusalem, Jared Kushner, speaking on behalf of the US President Donald J. Trump, asserted that the United States and Israel stand together because they both believe in freedom and human rights.

Israeli Prime Minister Benjamin Netanyahu has defended Israeli military actions near the border fence with Gaza, “Every country has the duty to defend its borders.” While some protestors may have engaged in some form of violence, this does not justify the use of live ammunition or mudering eight children in the process. The use of excessive force against unarmed protestors does not qualify to be described as a response in kind.

the Gaza Strip in Perspective

This is not the first time the Israeli military uses excessive force against Palestinians in Gaza Strip. In large-scale military operations in 2008, 2009 and 2014, Gaza has not only been left in shambles (24,000 homes destroyed ) but also with more than 2,500 people dead, most of them are civilians including 900 children.

The Gaza strip is one of the most densely populated areas in the world, with almost two million people sealed off in a narrow strip of approximately 40 km long and 8 km wide on the Mediterranean coast between Israel and Egypt. More than 70 per cent of Gaza’s population are Palestinian refugees, have been evicted from their homes since 1948. More than half of Gaza’s population are children under the age of 18.

Although over 80 per cent of Gazans receive humanitarian assistance, poverty rate hit 40 per cent by 2015 and is expected to have exceeded this percentage by 2018. Due to the siege imposed by Israel on the Gaza Strip, the unemployment rate has become one of the highest in the world. It hit 60 per cent amongst the youth in late 2017. 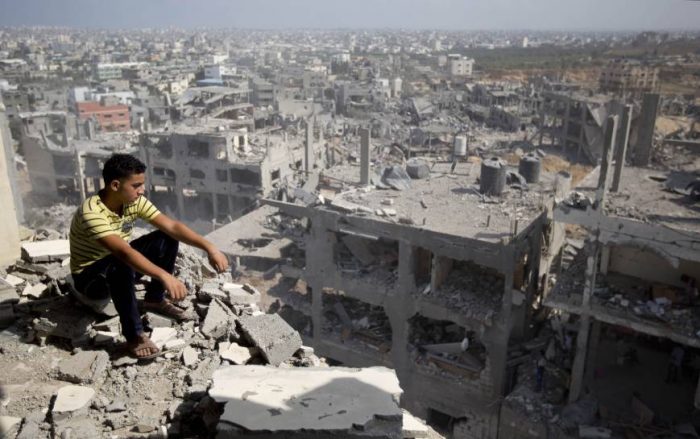 In 2015, the United Nations warned that Gaza might be rendered physically “unliveable” by 2020. However, an UN update to previous estimates in late 2017 has come to conclude that previous projections were too optimistic. “The findings of this report indicate that most of the projections for 2020 have in fact deteriorated even further and faster than anticipated.”

The area’s capacity for human inhabitation has been long exhausted as over 96 per cent of tap water in Gaza is unfit for human consumption. By the end of 2017, an UN report estimates that “Gaza’s only water source will be depleted, and irreversibly-so by 2020, unless immediate remedial action is taken.” In addition to that, food insecurity in Gaza reached 47 per cent in 2017.

Moreover, Gaza suffers from chronic energy shortages, which undermine the functioning of other infrastructure and services, such as water treatment, health care facilities and other productive sectors. More fundamentally, chronic shortages of hospital beds, doctors, nurses, teachers and schools are staggering, according to an UN report in 2017.

Gaza Strip has been sealed off by Israel since 2006 when internationally monitored elecions resulted in Islamist Hamas winning at polls. The idea of the siege was to subject Gazans to an “economic warfare”, which would turn civilians against their Islamist leadership. Due to the imposition of the economic warfare on Gazans, a total blockade of all economic activities has been in place since 2006. While this has not changed the political status quo in the tiny Strip, almost all the suffering has been inflicted on the civilian population especially children. In the words of former UK Prime Minister David Cameron, the Gaza Strip has turned into a “prison camp”.

It is extremely important to understand the desperate situation from which Palestinian protestors have arisen. The international community has yet to start truly addressing the desperate situation in Gaza. Perhaps a response in kind is to address the consequences of the economic warfare on Gazans today. As long as the humanitarian crisis in Gaza is still aggravating, no peaceful solution can be seen in sight for both Palestinians and Israelis.

Hakim Khatib is a postdoctoral research fellow at the Frankfurt Institute of Global Islam at the Goethe University Frankfurt. He is a political scientist and lecturer specialised in ideology and the interplay of power thereof in socio-political life, and religion and its relationship to contemporary politics in the regions of West Asia and North Africa, especially Egypt and Syria; and is the editor-in-chief of the Mashreq Politics & Culture Journal (MPC Journal).