The two-week occupation of the Slate building is ending today after negotiations between Warwick For Free Education and the University come to a successful close. Finn Halligan reports.

Students assemble to march to the Slate on the fourth day of the occupation.

The two-week occupation of the Slate, the University of Warwick’s £5.3 million luxury conference facility, is set to end today following a series of concessions by the University over Warwick For Free Education’s (WFFE) three demands. The University is dropping a long-standing injunction against occupations and sit-ins, publicly condemning the government’s higher education bill, and granting collective bargaining recognition to hourly-paid tutors. The Slate occupation constituted the longest indoor occupation of Warwick facilities by students in over a decade.

Beginning on December 6, the occupiers issued three demands to the University administration: to opt out of the Teaching Excellence Framework, a key part of the government’s new higher education reforms; to agree to Warwick Anti-Casualisation’s demands for fair teaching conditions; and to scrap the high court injunction against ‘occupation-style protests’ on campus and apologise for the University’s handling of December 3, 2014. The latter was granted in its entirety, with the University publishing a statement expressing regret for the events, during which CS gas was deployed against student by West Midlands police. 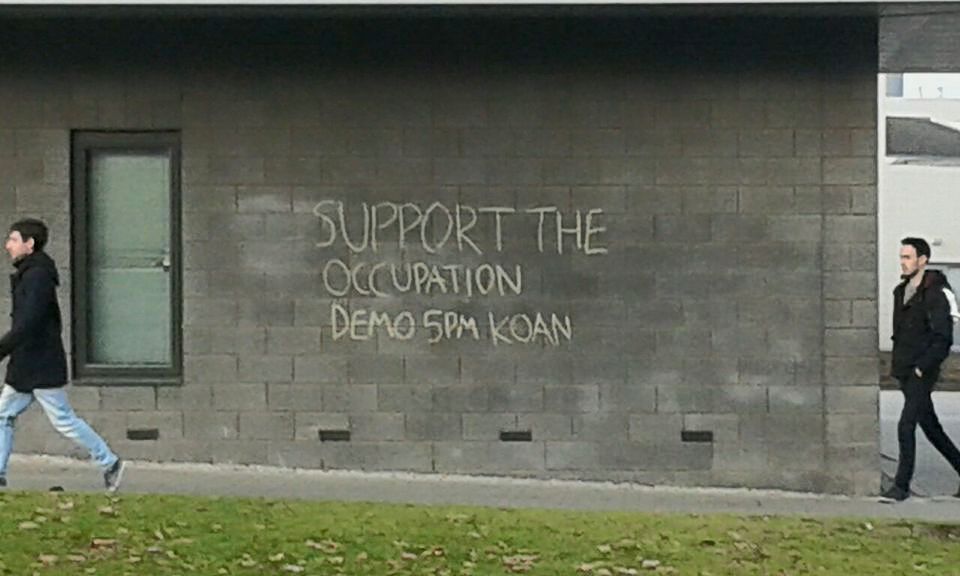 “I never want to be in a situation again in which CS spray or a tazer [sic] is deployed on our campus”, Vice-Chancellor Stuart Croft wrote. “Second, I regret that in the University’s communications that immediately followed what took place, the principle of neutrality fundamental to our University community was evidently broken”. The lifting of the injunction will fully restore the right of students to engage in occupations and sit-ins on campus.

“The scrapping of the injunction and the apology for December 3, 2014 are hugely significant for activists who are still impacted by the events of that day”, says Alicia Shearsby, a WFFE member and activist. “It also represents a massive win for the fundamental freedom to protest on campus”.

The University has also agreed to revise the agreement in place with the Warwick University and College Union (UCU), committing to include hourly-paid teachers in the remit of the Union’s formal negotiations. In addition, University management has promised to begin discussions with Warwick Anti-Casualisation (WAC), Warwick Student Union, UCU in January 2017 over the further demands raised by WAC.

Finally, the administration has acknowledged fundamental flaws in the Teaching Excellence Framework (TEF). The TEF, which ostensibly allows the government to monitor evaluate teaching at universities, has been heavily criticised by a number of student bodies, including Warwick for Free Education and Warwick SU. The framework – outlined in the Higher Education & Research Bill – has been condemned for its inability to accurately reflect teaching standards. Perhaps most controversially, the government is linking TEF scores to the ability of universities to raise tuition fees even further. The University have recognised that the framework will not, in fact, measure teaching excellence and Vice-Chancellor Croft has agreed to release a public statement detailing the University’s concerns with the Higher Education Bill. “[WFFE’s] opposition to the TEF does not arise from disagreement with the fundamental proposition that universities should provide high quality teaching”, says the Vice-Chancellor. “Indeed, we all agree with that principle. It is because the proposed metrics will not measure that. TEF will not do what it says on the tin; it will not measure teaching excellence”. Despite the concerns raised by Croft, the University will not elect to opt out of the TEF.

“This win by Warwick activists demonstrates just how powerful and effective collective direct action can be”, says Connor Woodman, National Committee member of the National Campaign Against Fees and Cuts (NCAFC). “At a time when there are so many challenges facing students and staff in higher education, it is crucial to remember what radical grassroots organising can achieve.”

Finn Halligan is a third year History student at the University of Warwick, currently on a year abroad. He is Perspectives co-Editor of the Warwick Globalist.