Perspective’s Editor Thames discusses the film ‘The Lobster’ in the context of online dating and suggests that looking for love and searching for a job have more in common than you think.

For anyone struggling to decide on what to watch for that first and formative date-night, Greek director Yorgos Lanthimos’ 2015 film The Lobster is one to avoid. Yes, there are plenty of laughs, the cinematography and shots of rural Ireland are breath taking, and the film could almost be called a rom-com. Then look closer and you’ll see that in Lanthimos’ dark and surrealist universe there’s something not quite right; in fact, there’s something that deeply disturbs and it’s not just the opening sequence in which a woman assassinates a donkey, or the shot of despondent guests slumped in off-white underwear in a 1970s hotel lobby. Instead, it’s the central dystopian plot twist that will leave you and your date choking on your popcorn, for in this European art-house film all single people must find love within a set number of days, or be turned into an animal.

It’s not all doom and gloom, however: guests at the rural hotel where ‘the transformations’ happen can at least choose which form they will take. When Colin Farrell’s sad, paunchy, and heavily moustachioed middle-aged character David is ditched by his wife and bussed out of the city to the remote countryside retreat, he seems fairly taken with the idea of becoming a lobster if things don’t work out. His reasoning? They live for over one hundred years, are blueblooded “like artistocrats”, and he also quite likes the sea. Yet even this small gesture of freedom is undermined by the looming threat of violence against inmates who fail to comply with the strict rules drawn up by Olivia Coleman’s curt and bossy Hotel Manageress. Those who misbehave are forced to put their hands into toasters or to wander around with boiled eggs under their armpits. Although nothing compares to the horrifying enforced activity of hunting for ‘Loners’, the fundamentalist singletons, who live feral in the hotel grounds. In the second half of the film, David escapes to join this rebel pack and the narrative follows suit, becoming somewhat lost in the woods.

The film’s message is deliberately ambiguous and Lanthimos invites you to see into his weird and masterfully rendered story any degree of subtext you like. Yet as someone who has used Tinder, Happn, and maybe even OkCupid once or twice (I was curious!), it’s hard to read the compulsory courting rituals and the inmates’ desperation to find love in 45 days as anything other than a nod towards the modern world of online dating. In fact, given that Tinder alone has an estimated 50 million users worldwide, I can’t be the only who saw the film as an obvious satire of the hyper-accelerated rhythms of millennial hook-up culture, facilitated by mobile matching apps. Even the deadpan antiseptic dialogue that the hotel guests chat each other up with sounds like the clipped, abbreviated lines of text-message flirtations: “You have really nice hair” says David to the blonde woman reclining by the pool. Needless to say, the compliment fails to win her over.

Perhaps this is because in the world of The Lobster, as in the growing online dating arena, partner compatibility is based predominantly on superficial similarities, and David’s hair is dull and greying. While guests at the hotel bond over proficiency in maths, partiality for biscuits, or shared vulnerabilities such as a limp, short-sightedness or constant nosebleeds, Internet daters are likewise matched according to seemingly trivial criteria. On joining, users of the popular millennial dating site OkCupid are required to answer questions about themselves, such as: “Are you a dog or a cat person?” “Do you like the taste of beer?” and “Does the idea of living under water fascinate you?” (David’s aspiration to become a lobster is apparently not so unique after all.) From these answers, the site then calculates an algorithm, which tells you, on a scale of 1 to 100, how good a match you are with someone. At the other end of the spectrum, Tinder, the app that allows you simply to “swipe left” or “swipe right” to other singles, also uses technology to filter its users’ possible matches: the only profiles it provides are those of “Tinderellas” or “Tinderfellas” in your nearby area.

Thus even though the Internet has expanded our pool of potential partners exponentially and globally, scientific matching algorithms employed by dating sites and smart phone apps are actually limiting our romantic scope. By curating our ideal ‘type’, sites like OkCupid tell us what we want before we have the opportunity to explore by ourselves. In this sense it would seem that Lanthimos’ formidable Hotel Manageress who instructs her guests to seek out partners with the same external traits, is the very embodiment of the paternalistic Internet dating company, which guides its user towards the profiles of daters who have quite literally ticked the same boxes. 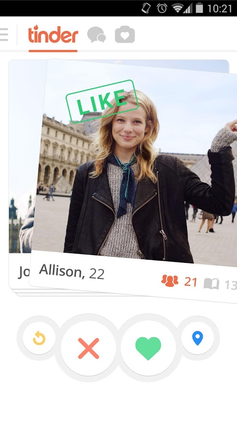 A recent piece in The Economist confirms that matching apps have strengthened this trend of “assortative mating”, whereby people chose to couple with those of similar income and skills. According to one estimate, the tendency to settle with your socio-economic counterpart accounts for as much as 18% of the rise in income inequality in America between 1960 and 2005. While it’s only in the past 15 years that Internet dating has become a mainstream phenomenon, and only in the past ten that the rise of smartphones have given birth to the dating app, these new technologies of finding love are visibly and rapidly impacting on how we live and how our societies are structured – a point that Lanthimos’ film darkly registers.

More significantly still, the article, along with several prominent American economists (Stanford Professor Paul Oyer), argues that searching for a mate is now no different from searching for a job. In the same way that many applicants lie on their CVs to improve their chances of being hired, a glimpse at any Tinder profile will tell you that online daters exaggerate everything from their height, age, job title and professional credentials to make themselves more desirable. Some even lie about their political views: the Tumblr site ‘Male Feminists of Tinder’ documents the growing community of men who have taken up feminism in a bid to attract the opposite sex. “Come dismantle the patriarchy with me” reads one bio. Tempting, but why do I feel like this guy has other intentions? In the instantaneous world of Tinder, it’s no surprise that these users want to stand out. As in the job sector, the online dating sphere practically necessitates that daters sell themselves in order to get noticed and survive in an increasingly competitive market place.

It’s important to point out that language of self-advertising in relation to dating has existed since the beginning of the popular press: the first ever ‘Lonely Hearts’ ad was published in the 17th century by a “gentleman” looking to “match himself” to a “good young gentlewoman”. However the rise of new digital media, urged by forces of the free market, demands that we now externalize our identities more than ever before. Indeed a growing number of journalists and cultural theorists (see Nicole M. Aschoff and Laurie Penny) have commented on the ways in which visually orientated social media platforms like Facebook, Instagram, Tumblr and Tinder actively encourage their users to see themselves objectively as a product or brand. OkCupid is no different. Its costly “promote me” service, which pushes your profile higher in search results, mimics that of Google’s, which lists businesses that pay more towards the top.

Thus it would seem that the elaboration and modelling of one’s personal and social identity online has been reorganised to conform to operations of the market. Not only do online dating sites constantly force us to ask: What is the essence of my brand? And what does this photo of me holding a dog/baby/giant fish say about my personality? But in the virtual dating arena, all participants are now expected to promote their assets with the competitive vigour and entrepreneurial instinct of a contestant on The Apprentice – the perfect neoliberal subject.

As in Lanthimos’ film in which guests are dressed in navy suits or smart high-femme floral dresses as if going to work, searching for a partner in our modern digital landscape feels more and more like a form of labour.