Coaching The Boar on Accuracy: Seven Things Wrong With Their Article on Free Education 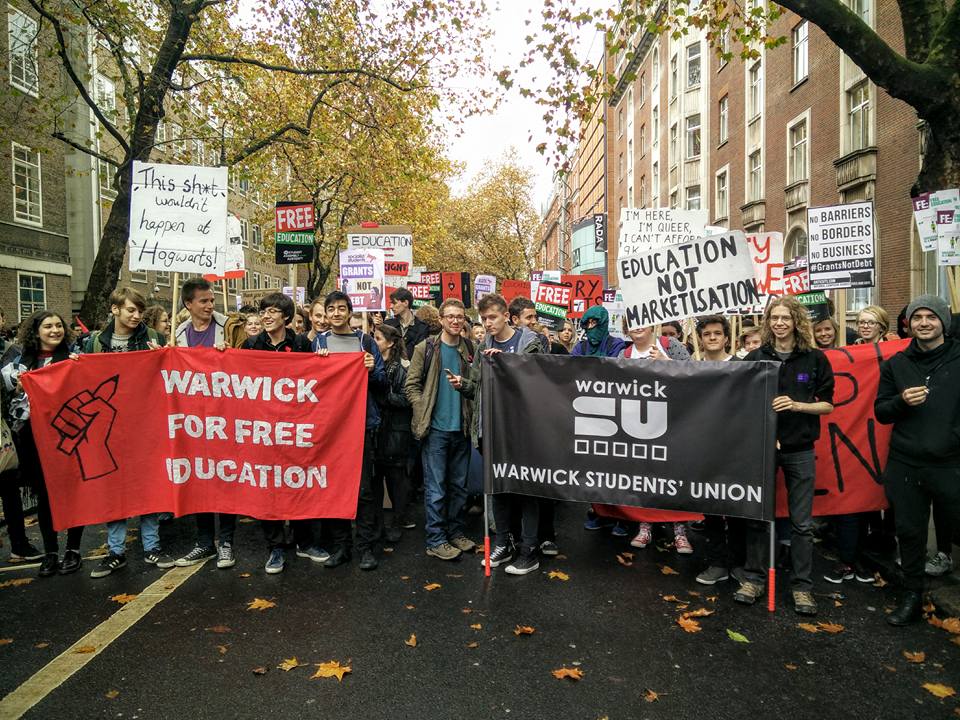 WFFE and others assemble at the start of the 'Grants not debt' rally in London on Nov. 4, which they led. Image: Warwick For Free Education

Note: This views stated here reflect Connor’s own perspective, and do not represent any official stance of the Warwick Globalist.

A recent article in the Boar’s latest print edition entitled: ‘Free education: Coaching the SU on bias,’ is quite an achievement. I counted at least seven inaccuracies, fallacies and distortions in the short comment piece – and that’s without any substantive engagement with the quality of the argument on free education.

It attempts to paint Warwick SU’s participation in the Nov. 4 rally for free education in London as an example of the nefarious bias of the sabbatical team – a team intent on serving the agenda of Warwick For Free Education (WFFE) at the expense of other societies on campus.

Here are seven things the article grossly distorted – or just got plain wrong:

1. WFFE organised the London demo: The article claims in the first paragraph that the march in London was “organised by Warwick For Free Education”. A simple Google search would’ve cleared that one up. It was in fact organised by the National Campaign Against Fees and Cuts, a nation-wide activist group.

2. Maryam Namazie was banned from speaking at Warwick: The writer states that, “Namazie wasn’t allowed to voice her anti-Muslim stance at the University as the SU feared it may upset Muslim students”. Firstly, this is flatly false. The SU initially cocked-up and barred her from speaking, but when the mistake was realised, the ban was rescinded and she spoke on campus on Oct. 28. Secondly, Namazie isn’t “anti-Muslim”; she critiques Islam from a secular position. Finally, the initial decision wasn’t made because it would “upset” Muslim students. The SU has to risk assess speakers under charity law, but has never in its history, as far as we’re aware, maintained a ban because any group of students would be “upset” by the speaker. If this were the case, there would probably never be any speakers at Warwick.

3. The SU Sabb team decided of their own accord to attend the rally: The piece constantly states that the Sabb team “decided” to go to the rally, as if they have free reign in choosing which causes to support. That’s not how the SU works. Nearly everything the Sabbs do comes from either their manifestos, which students vote upon in the yearly elections, or motions passed through All Student Meetings. These meetings usually take place once a term, and all students can vote, online, for four days, on the motions proposed to them. University and Education policy 004 mandates the Sabb team to “support a student’s right to peaceful protest… [and] support legal direct action for free education,” and to “mandate the Education Officer and President to support the lowest possible rate of fees in fee setting discussions with the University and to support a reduction in fees for all students,” among other things. This policy was voted on by the entire student body in 2011/12, and has been renewed in 2013/14 and 2014/15 by Student Council – which is comprised of all the main elected student representatives in the University. The policy was just expanded and reaffirmed in an amendment this term which passed with over 60% of participating students voting in favour. It was complimented by two more free education motions, on opposing the government’s new Green Paper on higher education, and opposing the Teaching Excellence Framework (TEF). Both passed with 66% and 59% in favour respectively, and voter turnout increased by 47% relative to last autumn’s ASM. Both motions further mandate the Sabbs to campaign on and raise awareness about the Green Paper and the TEF. This is how Warwick SU works – the whole student body vote on motions, and when they become policy, the Sabbs are required to act in line with them. Their attendance at the Nov. 4 demo was part of their routine work. It’s surprising that such flagrantly inaccurate statements, asserted with such confidence, were able to pass through the editorial board at the Boar – is it possible that those managing Warwick’s official student newspaper are unaware of the basic decision making structure of our Union?

4. The Sabbs participation in the rally was undemocratic: The article argues that the SU’s promotion and participation in the event “has undemocratic written all over it”. As noted above, the exact opposite is the case: they were acting on democratically decided policy, as they are required to do. The article bemoans the fact that Warwick Labour and Warwick Conservatives aren’t given the same support as WFFE (note: the SU wasn’t supporting WFFE per se; the Sabbs were promoting a rally that WFFE also happened to be promoting). Due to charity law – and legally, the SU is a charity – the Sabb team can’t support explicitly party-political campaigns. They can only support broad campaigns (such as those run by WFFE). If the Warwick Conservatives want to get together as students (and not as the Warwick Conservative Association) and propose a motion to be voted on by the student body, they are well within their rights to do so, and the Sabb team will be required to act upon it if it passes.

5. The SU always attempts to stay ‘neutral’: The author writes that the SU “should have remained neutral” on the issue of free education. Let’s leave aside the problem that remaining neutral would entail overriding the democratically-decided position of the students. Crucially, this line is utterly ahistorical. Students’ Unions haven’t attempted to maintain neutrality since the 1960s. When policy is democratically agreed upon – through an All Student Meeting, or through a manifesto – then Warwick SU will take a “political” stance, as it should. From the anti-apartheid movement at Warwick in the mid-70s, which had strong SU support, to the Fossil Free divestment campaign, tuition fees, arms companies and more, Warwick SU has a great history of being involved in vital causes that stretch beyond the narrow confines of campus life.

6. For the SU to be able to do something, every student needs to support it: In an attempt to show that not every single student supports the principles of free education, the writer asks, “why wasn’t the entire student body of Warwick University at the London demonstration?” Let’s ignore the fact that not going to a rally doesn’t necessarily imply you don’t support the cause. More importantly, it’s an utterly facile point. No policy that the SU enacts will be agreed upon by every single student. Not every student cares about, or is affected by, the same issues. If the SU only enacted policies that every single Warwick student whole-heartedly agreed with – well, they wouldn’t do anything. So her recommendation that the SU “be certain that their decisions are what all of the students of Warwick want” is dubious at best.

7. What we need is referendums and polls: Probably the most amusing part of the article is where it concludes that this whole event shows how “perhaps the way forward is to introduce referendums and polls”. Literally at the same time the article was printed, there were five days of debates and voting going on for the termly All Student Meeting. Eleven motions were up to be voted on, online, by the entire student body. If that’s not a referendum, I don’t know what is.

What’s most embarrassing is that the Tab Warwick published an anti-free education article in the same week. It was far better. You’ve really got to go some to publish an article that’s worse than that in the Tab.

The Tab’s collection of gutter ‘journalists’ deliberately mimic the worst, click-bait-driven aspects of the national red-top rags: sensationalism, triviality, and a seemingly insatiable urge to publish the irrelevant, uninformed opinions of the most reactionary and idiotic students.

The Boar’s train-wreck article comes on the back of another terrible piece that was recently released in the newspaper’s comment section. This one slammed mature students and asserted in the finest tones of Warwick-snobbery that, “I genuinely think you have every right to be sitting in that lecture theatre, rubbing shoulders with aspiring, ambitious twenty-year olds – as long as you pay the fees, right?” It’s not clear what the Boar thought it had to gain from publishing an elitist attack on an already-marginalised group on campus. The article was so atrocious it was taken down.

We should also question the Boar’s recent obsession with going after Warwick SU. I completely agree that we should hold the SU to account, but their articles seem to be getting it repeatedly wrong. They recently published an article claiming the SU were making a loss from their food outlets. The SU claimed that the statistics were all wrong, and that the Boar failed to wait for a reply for comment from the Sabbs before they ran the piece. That article has also been taken down.

Given everything that goes on at Warwick: the presence of arms companies, police violence, absurd amounts of money being spent on The Shard in London, decisions being made with no or little consultation with students, and more – and the Boar does cover some of these things on occasion – we should question why they are spending so much time writing inaccurate articles in an attempt to criticise the SU.

This is a publication which won student paper of the year in 2013. One can only weep for what that says about the state of student journalism in the UK today.