As Brexit becomes more of a mess each day, Emma Worrall looks at what many have touted as the possible solution to it all: A People’s Vote.

Mid-September to early October, what is often referred to as ‘conference season’, ultimately saw very little concrete shift on Brexit. The Conservative party conference yielded a May speech without a cough, a P45, or a collapsing slogan in sight, and produced a rare human moment for our embattled PM. Even so, the speech didn’t even mention her Chequers plan, in another attempt to satisfy everyone, by ultimately satisfying no one. At the Lib Dem conference, Sir Vince Cable attempted to convince us that there is such a thing as a radical moderate. Meanwhile, the Labour conference saw the party shift its stance monumentally, from not considering a second referendum, to considering a second referendum as a last possible resort.

Labour’s reluctance to budge on a second referendum is especially interesting given the fact that of their 540,000 members, 86% back a People’s Vote on Brexit. What was perhaps more interesting, certainly to the party’s leadership, is that their new young and urban-based members that make up the main body of the Momentum group, has remained silent on the issue.

While Momentum’s raison d’être is to support Jeremy Corbyn, tensions were rising as Labour continually stopped short of backing a People’s Vote. Momentum’s core mantra is the call to open up politics and shift power away from ‘the few’ towards ‘the many’. In this case, this applies less to taxes and more to making sure the party’s membership agrees with the direction the of the party’s leadership. For instance, they backed the McDonnell amendment in 2017, which lowered the threshold of Parliamentary Labour Party MPs that are needed to nominate candidates in leadership contests, from 15% to 10%. This year, Momentum was fighting for the mandatory reselection of MPs, and achieved some reform in making it easier for members to deselect local MPs. A cynic might read these battles as a faction in power, and one that is desperate to stay there. But, from the point of view of Momentum members these reforms are about giving more of a voice to Labour members, and avoiding the re-treading of a past of men in suits, locked in a room making all the decisions. Hence the dilemma over Brexit: if Momentum is about democracy and about keeping Jeremy Corbyn in power, what is to be done if those two interests do not align any longer?

After a 6-hour meeting with delegates, trade unions, the party leadership and other interested parties, a motion was finally agreed on to vote on whether Labour would open itself up to the mere possibility of another referendum. Even then, that would only be if the party failed to trigger another General Election. The motion passed, of course, as it was designed to, and a lot of members seemed to leave conference with a spring in their step, confident that this blip in the never-ending Jeremy Corbyn parade had been avoided.

But why is a People’s Vote seen as so antithetical to Jeremy Corbyn and his future success? For one thing, it cannot be denied that Corbyn has never really been passionate about staying in the European Union. Though he backed the Remain vote, he famously said he was “seven out of ten” on the EU during the referendum campaign. A decision to back another referendum would undermine his own position as a Eurosceptic.

But Corbyn’s position on Europe tends to be fairly plastic. What’s more at stake, and rightly so, is the Labour vote in Leave seats. While Jeremy Corbyn’s rise to power has helped shore up Labour support in urban areas, the so-called ‘heartlands’ in the North and the Midlands; has dwindled. There are reports that Labour stands to gain 1.7 million votes if they backed a People’s Vote, losing only about 200,000. However, it’s likely that this will generate support in areas which are already securely under Labour control, and would distance the Party from their traditional votes in old, industrial centres.

Still, if Labour claims to now be member-led, and their members clearly want a second referendum, they are going to have to either come around to pushing for the People’s Vote, or they will have to admit that there is a key flaw in this new ‘democratic’ brand of Labour. Giving their members a voice is different from giving the British people a voice, a fact that is very often ignored when analysing the party’s recent developments. The issue of people’s using of buzz words and political rhetoric to mask their true agendas is endemic here. Those who say they are working and campaigning for democracy are often using this language to accomplish their own cause: Jeremy Corbyn’s continued leadership, Brexit, remaining in the EU, getting the immigrants out, making their holidays easier, and on. With this in mind, would we be able to see past the bullshitting in a second referendum? 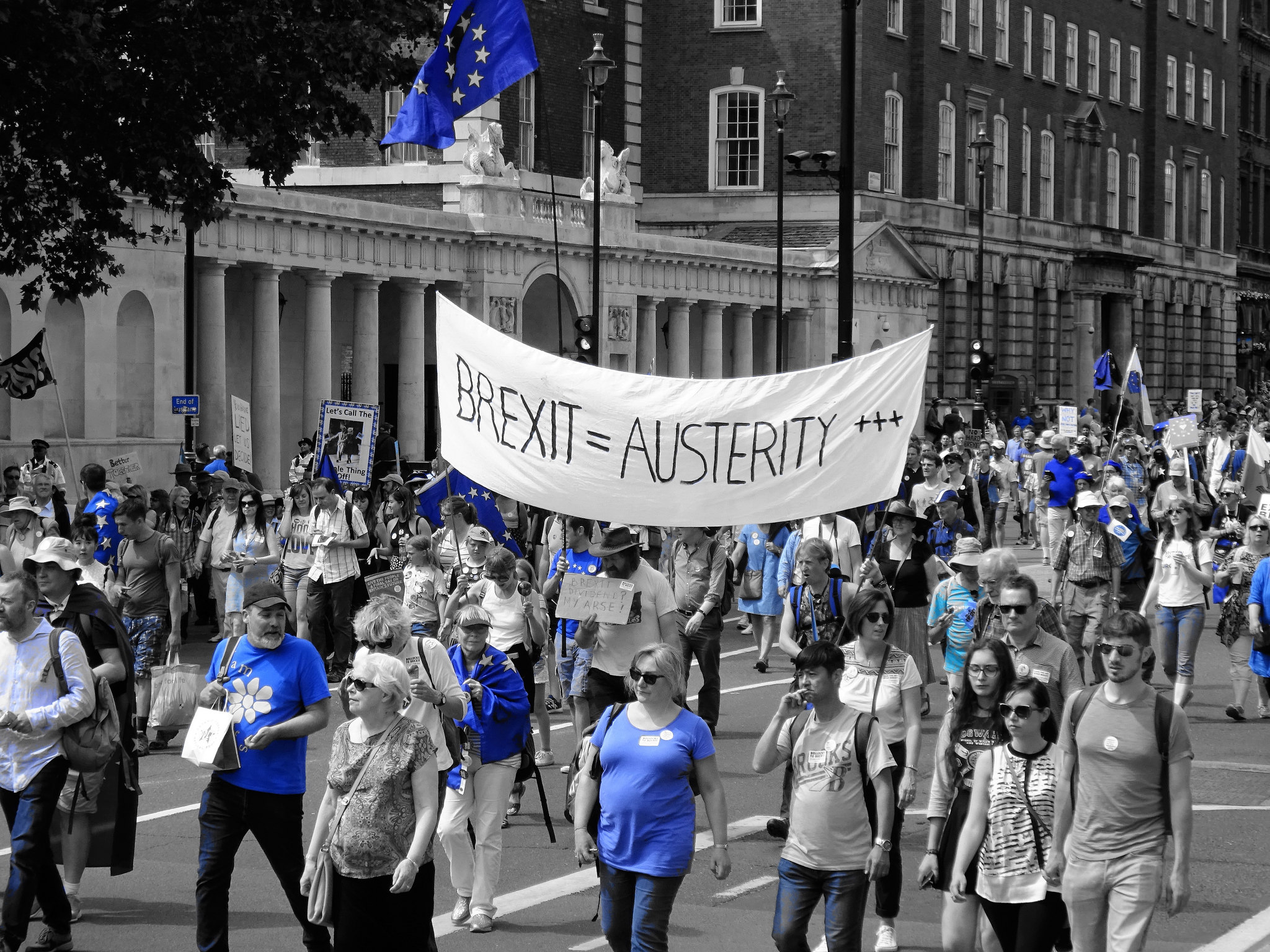 So, to vote or not to vote?

It’s funny, but also tragic, to remember social media in the days after the Brexit vote. I think back to people petitioning for the declaration of independence for Scotland, the combination of Remain seats Scotland and London. Another big story was how the Google searches for “What is the EU?” exploding after the result was declared, showing that, even after months of campaigning, many Brits had voted uninformed. Most enduring is the petition for a second vote. The parliamentary petition got over 4 million signatures. Scrolling through my social media feed on 24 June 2016, it was an outcry from people, especially young people, begging to not live in a country that was turning away from the outside world, and especially from the immigrants who form Britain.

For a long time, I looked back at that petition, still shocked and devastated by the vote, in denial that this would actually happen. I eventually came to terms with the decision, and realised that people had voted, and that’s how democracy work. It’s been two years. I have more or less accepted now that we will leave the European Union. However, only a few months from leaving the EU, with polls showing support for another referendum, I am starting to reconsider whether the People’s Vote is truly the best thing for the country.

The conflict, for those on the left who are passionate about Britain being better in the EU, is whether we respect the vote, and thus obey the will of the majority, or we rebel. This second option requires that we accept the privilege this decision represents. Demographically, we are much more likely to be middle-class and educated, able to access the opportunities the EU offers. But, on the other hand, Brexit voters often express a sense of alienation between their vote and actual change. The reason why Brexit was so monumental for these voters was that the ‘metropolitan elite’ hadn’t got their way. As much as I feel that Britain, especially the most marginalised in it, will suffer if Britain goes through, I know I’m speaking as someone raised to think that I am right.

Throughout 2016, much was made of the connection between the rise of Donald Trump and the British vote to leave the EU. Both were seen as indicating a rise in right-wing populism and isolationism. But a connection could equally be drawn in 2018 between the People’s Vote campaign and the continuing FBI investigation into Donald Trump’s campaign and its potential ties to foreign interference into the election. Both could be seen as ways of righting the wrongs of 2016, and the mistakes made by voters at the time. But both have the heavy consequences of overturning a democratic vote.

One of the major arguments for a second referendum is the wrongs and undemocratic actions performed by the Leave campaign. Like the Trump campaign, the Leave campaign has been investigated for campaign finance violations and there have been allegation of foreign interference, once again by Russia. Just this week, it was revealed that the National Crime Agency is investigated the Leave campaign’s Aaron Banks for £2.9 million of misused funds. So the argument could well be made that in the face of these corrupt campaigns that the results of elections are invalid. Yet it cannot be ignored that people still went to the polls and cast those votes.

However, Trump will face re-election in 2020. Though every president to some extent makes a lasting impact on people’s lives, their terms do not exceed 8 years. Brexit is permanent and, unless there is another referendum, the British people will not have the opportunity to reverse it.

Labour’s policy now is to campaign for another general election, the implication being that Labour wants the opportunity to be in the driver’s seat for Brexit. The problem is that there has already been a general election since the Brexit referendum – and Labour fudged it. They deliberately made their Brexit position foggy to appeal to both the Leave and the Remain vote. Their position on Brexit is more or less only to be a little softer than the Tories, but not in a way that is ever especially explicit about how.

Moreover, if there was a general election, it has to be noted that the campaign would have to be about a lot more than Brexit. GE 2017 was already supposed to have been a ‘Brexit election’, but the campaigns focused a lot more on issues of nationalisation, healthcare, benefits, education, the economy, and all those other core issues that every general election is usually about. Unless Labour radically redefines their Brexit policy, there is nothing indicating that another election would be more of a sign from the British people about the direction they want for Brexit.

Because of this, and because of the mess the government is currently in with Brexit, I have to reluctantly believe that another vote about Brexit is perhaps necessary. However, what that vote would look like would be an almost-unfathomably complicated question. Would ‘Remain’ still be on the ticket, with the risk of the people’s anger at the possibility that their democratic vote could be overturned? Would it be a vote between a ‘Soft Brexit’ or a ‘Hard Brexit’? If so, who would even define what Soft or Hard would signify? And how would one even campaign for a Soft Brexit when a) most people now arguing for a Soft Brexit started as Remainers, and b) a Soft Brexit would almost certainly mean making concessions that the original Brexit campaign told us we wouldn’t have to make in the run-up to the Brexit vote?

The biggest question however is: What does this mean for our democracy?  First of all, the Brexit test has revealed it to be intrinsically flawed. Brexit was an issue far too complicated for it to be put up as a Yes/No style of referendum, especially as the government did not even plan for a Brexit situation. Our party political system is not made to withstand a generation-defining vote like this one on a matter that touches so many parts of our lives.

Both parties, but especially Labour, do not now know which side to take. For Labour, and for the people on the left, the conflict is between a decision made by alienated, often economically-disadvantaged voters, versus avoiding a fate which would harm those same voters – a worse economy, fewer legal protection, more job and food insecurity. If anything, they could at least start being honest about that. But if they do insist on being the party of democracy, at least make sure that democracy isn’t limited to those who support Jeremy Corbyn and make it about every voter in the country.

Then again, only a few months from Britain’s exit from the EU, you have to wonder whether it even matters anymore.