Tom Harrison breaks down the IPCC report; looking at the insight it provides in the battle against Climate Change or whether it is too late for humanity’s life on Earth

The ideal temperature for the human body is 37°C, at 38°C hyperthermia sets in and above 40°C you will usually die.

For life on earth it’s not much different. Global average temperatures have already risen 1°C and hyperthermia is beginning to set in, in the form of more frequent floods, deepening droughts and worsening weather events. Simply put, the climate has changed.

The supposed solution, the Paris Agreement commits us to keeping average global temperature rises below 2°C, and aims to keep warming to 1.5°C. These numbers have been used for some time as a short hand for the levels at which we avoid total climate catastrophe but their implications aren’t well understood in policy circles. To try and bring some clarity the UN commissioned a report from the IPCC explain just that. Before we start to delve into the content of the report we need to understand what we’re reading.

Firstly, the Intergovernmental Panel on Climate Change is just that; intergovernmental. While scientists compile the report, every line is subject to the approval of each participating government. The reports are just massive literature reviews compiled on the basis of some fairly arbitrary rules; it looks at each impact discreetly and only considers limited forcing effects. Governments can pick the science that suits their motives. Consequently, the reports are known in the scientific community as somewhere between overconfident and misleading; their most recent Assessment Report is only 4 years old but already looks like a folly in optimism. 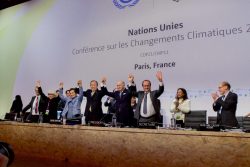 That the IPCC report is this stark is truly chilling when you consider what was left on the cutting room floor, but it shouldn’t be surprising. In the last decades reports from organisations as radical as the European Energy Agency, the World Energy Council and even BP have suggested that because of the delayed impact of the greenhouse effect we have probably already passed the emissions threshold for 1.5°C.

And that’s probably the most important thing to keep in mind throughout. Whilst the IPCC was commissioned to look into 1.5°C or 2°C of global warming, we aren’t even remotely on track for either. Even if all the commitments made under the Paris agreement come to fruition, and the USA sticks to its commitments, neither of which look likely, we are set to see warming of at least 3°C. In fact, hidden on page 23 of the 33 page ‘Summary for Policymakers’ the report tacitly acknowledges this, stating all pathways to achieve the 1.5°C scenario would require us to deploy carbon dioxide removal in ‘the order of 100-1000 GtCO2over the 21stcentury’. That is deployment of a technology that doesn’t yet exist at scale to remove 20 years’ worth of CO2, that’s not just ludicrous, that’s dangerous. Anything below 2°C is now the rapidly vanishing best case scenario.

That’s not to completely write off half the report, it can still be useful to give a us an indication of the impact a seemingly small difference can have, it gives us an idea of the difference between 1.9°C and 2.4°C, or more likely between 3.3°C and 3.8°C. It shows us that where ever we end up we have to fight for every fraction of a degree.

This report makes that starkly clear, that for each fraction of a degree more people will die from heat related illness, with more still dying from vector borne diseases like Malaria, Dengue and Zika. More pervasive droughts will cause yields of staple crops to fall leaving millions hungry and the poor hit the hardest.

Warming is magnified at the poles, where warming will be double or triple the global average. At 2°C we can expect an ice-free summer ‘at least once per decade’, even at 1.5°C we should still expect that once per century. That isn’t just curtains for polar bears, but presents a new spectre which the IPCC doesn’t consider; the reflectivity (albedo) of the polar icecaps is responsible for reducing the greenhouse effect by 8-12%, so iceless seas will drive yet more warming.

As the mercury rises so do the seas. The report predicts a 61cm rise at 2°C, but ‘instability in Antarctica and/or irreversible loss of the Greenland ice sheet could result in multi-metre rise in sea level’ that would see hundreds of millions displaced. A movement of people never before seen in history, multiple times that from the war in Syria, dwarfing even the partition of India.

The future is no brighter for our natural world. On land 18% of insects, 16% of plants and 8% of vertebrates likely to lose over half their range at 2°C, two or three times what would be manifest at 1.5°C. But for coral reefs the game is up, the report predicts the total loss of the ecosystem that currently supports 25% of marine life, decimating the oceans to an extent not seen in the history of life on earth. Whatever the specifics, the report makes clear we are now entering the endgame on climate change.

This report contains nothing we haven’t ignored before. The first report on climate change was submitted to President Lyndon B Johnson in 1965 and the first UN conference followed a few years later. We have squandered so many opportunities that it can sometimes seem hopeless. But there are glimmers of hope. At the moment nobody can say, in all sincerity, that they are doing everything they can. If we were doing everything we could to get to net negative emissions and were still failing things would truly be bleak, but there is still so much we can do.

I could talk about wind turbines, solar panels and electric cars but technology only gets us maybe half way there. Fundamentally we just need to use less; eat less meat, eat more seasonally, drive less, avoid flying, use less energy, improve land use, reuse things as many times as you can, reduce air conditioning use, lower aesthetic standards, prioritise maintenance and quite simply just buy less stuff.

We also need to get angry. If the first duty of government is the safety and security of its people then every single government is failing in that duty by allowing climate change at current levels. Our current system that obsessively pursues economic growth is antithetical to one that seeks to reduce carbon emissions. Through the ballot or direct action, all people, young and old, rich and poor need to stand up to bring about system change to prevent climate change.

Tom Harrison is currently studying part time for an MSc in Sustainable Automotive Technology and runs a company called E.Mission which works to help people understand their carbon forkprint and give them the tools to reduce it.