Blood in the streets of Athens: 74 years since Britain’s forgotten betrayal

Second Year History student, Isaac Little, sheds lights on the bloodshed of a dark, forgotten event in Britain’s recent past and its impact on the political framework of modern Greece.

On December 3rd 1944 recently arrived British troops and foreign journalists watched on as a crowd of 200,000 demonstrators marched through Athens. The demonstrators were protesting against the disarmament of Greece’s largest resistance organisation, the left-wing National Liberation Front (EAM). Yet the atmosphere was jovial. They carried British, Soviet and American flags; they chanted “Long Live Churchill! Long Live Roosevelt!”. It wasn’t unheard of for even leftist Greeks to have photographs of Churchill. By the end of the day blood would stain Athenian streets and the British army would be engaged in an operation to crush those who’d welcomed them as friends. The action was one of our darkest, least popular and most forgotten of World War Two. In Greece this conflict is remembered as Dekemviriana, or ‘the December Events’.

As the vast crowd-filled Constitution Square the Athenian police, staffed by former collaborators and members of the fanatical anti-communist Organisation X, grew increasingly uneasy. They knew they were unpopular. Athens was the only part of Greece not liberated by the Greek resistance before the arrival of the British. Everyone knew the role of these men in extending the occupation. The crowd pushed forward. The men fingered their rifles. Up on the roof of the Hellenic Parliament their colleagues were taking up positions.

It was then that the Athenian police, unprovoked but in a state of nervous panic, raised their British supplied weapons and opened fire into the crowd. The shooting lasted for fifteen minutes. By the end 148 protestors lay wounded; 23 dead. The massacre triggered an uprising in Athens that pitted Greece’s largest resistance organisation against the British backed government. EAM expected the British to remain neutral. Instead Churchill ordered British troops to ‘act as though you are in a conquered city where a local rebellion is in progress’.
It wasn’t without reason that many Greeks expected British neutrality. For these ordinary people the British had been key allies in the struggle for liberation. British special forces had spent years in the mountains fighting alongside EAM, and EAM itself played a critical role in aiding the wider allied war effort. In Operation Animals, Greek resistance fighters almost destroyed their own organisations in overly aggressive offensives designed to trick the German High Command into believing the Allies were planning to invade the Balkans rather than Italy. Why would the British intervene to protect former collaborators and fascist sympathisers against long-time allies?

The reasoning comes down to early Cold War politics and enduring British imperialism. Churchill was concerned that EAM was merely a front organisation for the Greek Communist Party (KKE). While EAM was officially a collection of many republican, socialist, and liberal parties; the KKE held many of its levers of power. Those within the foreign policy establishment feared an EAM victory in Athens would mean Greece falling to the red tide. Just months before Churchill had made his infamous percentages agreement with Stalin: 90% British influence in Greece for 90% Soviet influence in Romania. Greece was vital for ensuring British interests in the middle east. Left-wing resistance organisations had been critical for undermining Axis occupation but now the fighting in Athens put Churchill’s entire post-war project at risk. 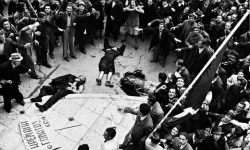 For the first few days of fighting the British were not fully committed. The British ensured Greek government control of the city centre and ports but left much of the combat up to the Greeks. Behind the scenes their role in extending the conflict was catastrophic. An attempt by Greek Prime Minister Georgios Papandreou to resign in favour of moderate leftist Themistocles Sofoulis, who he believed would be able to negotiate peace, was quashed by Churchill. A new leftist government was a perceived victory for EAM and therefore unacceptable.

As the battle continued it became apparent that EAM were winning, and rapidly. By the 12th much of Athens had fallen to the partisans. The British response was to redirect 80,000 soldiers from North Africa and the Italian front to Athens. The newly liberated city of Athens was torn apart by British heavy artillery, tanks and planes. Eye witnesses talk of entire apartment blocks levelled by shellfire and working-class neighbourhoods strafed by RAF fighters. In all the gruelling urban combat lasted 37 days and resulted in the deaths of 20,000 civilians.

As the fighting dragged on the National Government came under incredible strain. The idea of British soldiers being redeployed in order to crush an anti-fascist resistance group alongside former collaborationist paramilitaries was shocking. The press attack on Churchill was vicious and Labour came under increasing pressure to withdraw from unity government and force an election. By the end of the conflict EAM had been crushed and the British public’s confidence in Churchill shaken. Left-wing partisans agreed to disarm across Greece and the horrors of the White Terror followed. It’s estimated that 1,289 suspected leftists were extra-judicially murdered, 6,681 were attacked and 19,000 imprisoned for their involvement with EAM.

The role of Churchill and Britain in the bloody events of Dekemvriana has largely been forgotten. Yet its effects on modern Greece still reverberate. The seeds of civil war and right-wing dictatorship were sown by British soldiers storming partisan strongholds and working-class homes. There is a tendency to think of WW2 as the “Good War”, but events like Dekemvriana show the danger of blind self-congratulation. It’s easy to think Britain’s difficult past is tied solely to colonialism, and that the Second World War represents an unambiguous triumph for British will and morality on the world stage. Britain’s role in the conflict should be celebrated without letting the veneer of the “Good War” smother the problematic parts of our involvement. By forgetting Dekemvriana we also forget the 1,943 British casualties who gave what they could for the immoral orders of the British High Command. So, 74 years later let’s remember a forgotten part of Britain’s history; it is only by remembering the challenging parts of our past that we can understand our nation’s role in the world today.