Brazil and Bolsonaro: Check and Mate

BRAZIL, 28th of October — On Sunday, Brazilians have made the choice to elect Jair Bolsonaro as the new head of state with 55.2% of the votes, defeating Worker’s Party Fernando Haddad and surprising literally no-one. What the implications of his election are and what it means for Brazil’s democracy are subjects that have been widely discussed in the last few weeks as Bolsonaro’s election was largely predictable since the first round. Where us outside commentators have argued non stop on the dangers of a return to a military junta-like regime, we have actually missed the point. In failing to divorce ourselves from our own perspective, we ultimately lack understanding of the real-life situation. Though it is important to note that a strong opposition exists, with massive protests which occurred  in October as well as a condemnatory press, this piece is an attempt to adopt the perspective of the majority: Bolsonaro’s electors. In simple terms: What is his appeal?

Jair Bolsonaro, a former military captain under the 1950’s military regime has always been present in the public discourse, but often portrayed as an irrelevant clown due to his many offensive comments targeting women, the indigenous as well as the LGBT community. Bolsonaro is nonetheless a newborn on the stage of Brazil’s politics: his rise to power began in 2016 as a causal response to the decline of the Worker’s Party (PT) and more precisely the much talked-about scandal of the “Operation Car Wash” which now forever stains the latter party with corruption and manipulation. Following the impeachment of Dilma Rousssef in 2016 and the eviction of former president Lula in April from the presidential race, can we blame the Brazilian people for not wanting to give a chance to their third place substitute Haddad? Corruption is one thing, but the PT is also associated with all of the country’s misery, crime and economic recession; notably because they were the party in power for the last 13 years. It seems that the a generalised ennui and hatred of the party has undeniably been a liable cause of Bolsonaro’s success.

This pattern is not so new: during the 2017 French election, the comfort of the Socialist party (PS) was abruptly broken by yet another general fatigue. The difference here was in terms of choices. Alongside the expected effects of such apathy towards the status quo,  the rise of the far-right party (here Marine Le Pen’s Front National), the other contender and now President had chosen the strategic political stance of being everything and nothing at the same time. Emmanuel Macron was the go-to choice but also, for many, the vague centrist “in spite” choice selected in order to avoid an extremist and disastrous outcome. Brazil didn’t seem to have such a figure.

In many ways voting for Bolsonaro was a rational reaction to the reality of everyday Brazilian life. For a better understanding, let’s establish some facts. According to the latest OECD data only 37.3% respondents said they were feeling safe walking alone at night. In 2017, 63 880 violent deaths have been reported to the police; among them, 445 were targeted at the LGBT community. Targets of such violence are mostly black, young, and poor, all affected by the growing gang violence in the favelas. In the span of the last decade, the country also faced an increasing inflation rate combined with a recession which saw GDP drop by a third. On top of this unemployment is at 12.8%, a ten year high, whilst youth unemployment sits at 30.4%. Income disparity also is a problem in the country with land ownership monopolised by a rich minority, extremely high regressive taxes on consumption (like those on food) disproportionately burdening the poor and a lacklustre education system denying hope for social mobility. Faced with such material threats and suffering, is the choice of a populist panacea actually surprising? 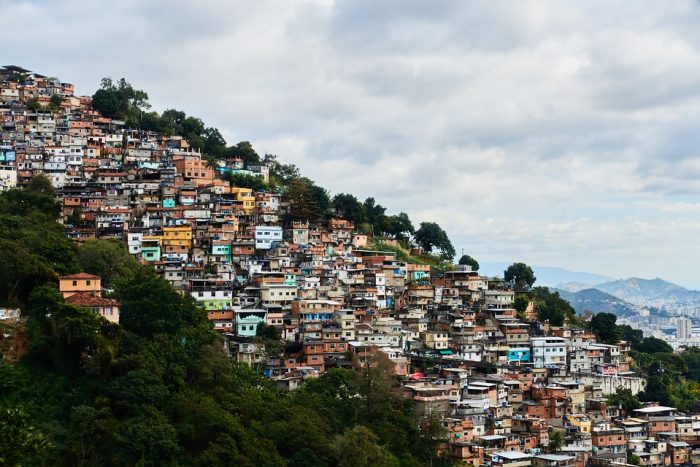 Rio’s infamous favela is one of many examples of material suffering in Brazil
image: Pixabay / NakNakNak

One diagnosis of Brazil’s situation is that the country hasn’t moved past the Materialistic stage yet. In Post-Materialistic societies; wealth and most basic material needs (employment, food, housing, working conditions, safety) have been secured, what remains for political actors is the furthering  and fulfilment of values. Occident societies now flourish with Identity Politics, in Brazil, it seems that the nation hasn’t answered the fundamental question of providing safety and prosperity to its citizens. Alongside misinformation and misplaced hatred, those are explanatory variables of the disregard for offensive statements. The real life implications of this result is that the majority is more concerned with whether they are going to make it back alive from work or if they will manage to feed their children this week, not the bigotry of their leader. No matter how unfortunate this is, human nature tends to value survival above all else. Questions of bigotry seem irrelevant to someone struggling to set food on the table.

Depicted in the press as the “Trump of the Tropics”, the newly elected President only followed the populist narrative : a political outsider surfing on the anti-PT wave, capitalising on people’s hatred and presenting himself as the solution to the nation’s woes. Where opponent Haddad failed to repaint a new picture of the Worker’s Party, Bolsonaro succeeded at collecting the damages.

In the midst of strong emotions, division and the need for change, populism has again become a threat to democracy. However, the recurrence of such patterns demands reflection: is the predominant bipolarity of political systems worldwide to blame for the rise of far-right parties? The traditional sectarian division between Left and Right, just like the Republicans and Democrats feels ever more outdated; and in order to reboot democracy we must find new alternatives to the two party monopolies that so often lead to stalemate and political alienation. Who can blame people when they are asked to choose between the devil and the deep blue sea?