Shinzo Abe and the Future of Democracy in Japan

Despite facing a massive political scandal in the past two years, Shinzo Abe’s re-election as leader of the LDP (Liberal Democratic Party) last month was a cakewalk. Quite an achievement, given that none of his six predecessors (himself among them) lasted more than a year in office. And with no apparent challenger in sight, plus talk of the LDP revising the rules of term limits on party leaders, Abe has a realistic shot at becoming his country’s longest-serving prime minister. His critics at home balk at the prospect of a pale Japanese imitation of Xi Jinping, asking how his foreign policy, espousing freedom, democracy, and the rule of law, can be squared with his actions at home. Abroad, Abe’s historical revisionism only confirms Japan’s immediate neighbours, South Korea and China, in their belief that his proactive pacifism cloaks a revival of Japanese militarism.

So what are the chances of a rerun of the 1930s in Japan and the region? In terms of a second Pearl Harbour and its aftermath, somewhere between minuscule and non-existent. Yes, Abe undoubtedly shares the desire of his grandfather, Kishi Nobusuke, to enhance Japan’s standing as a major international player. The world has changed too much however for any revival of Japanese territorial expansionism to be remotely feasible today. The best Abe can hope for is to reinforce the regional and global status quo against the advance of the Chinese hegemon, and even this is a tall order. His embrace of Narendra Modi, physical as well as diplomatic, and his defence of democracy in the region are gestures born of weakness. For all that Abe may wish to flex his military muscles to deter the Chinese (and the country’s armed forces are well-equipped) the Japanese public remains suspiciously vigilant about any attempt to undermine its deeply entrenched pacifism. Demographics have weight here too. The country’s rapidly aging and dwindling population means there are ever fewer bodies to defend its territory, beginning with the disputed Senkaku/Diaoyu Islands.

But is democracy in Japan itself in genuine danger? Chris Hughes, an expert on Japanese politics at Warwick, argues forcefully that for Abe and his supporters, the “process of Japan reviving its national identity and international presence mandates the systematic dismantlement of past and externally imposed structural obstacles”. The 1946 Constitution, drawn up during the Allied occupation, is one such inconvenient “obstacle”. Moreover there are genuine signs that right-wing nationalism is on the march, including the LDP’s proposed draft on amending the constitution, published several months prior to Abe’s return to power. First and foremost among the reforms? New powers to declare a state of emergency that suspends constitutional processes and to replace universal human rights with values reflecting the history, culture and tradition of Japan. It cannot be understated that these reforms pose a genuine existential threat to the constitution’s checks and balances, as well as the freedoms it guarantees.

Abe’s ultimate target is Article 9 of the constitution, which renounces war and Japan’s right to defend itself by force. Roadblocks strew his way here, though, notably Article 96 of the constitution, which requires a two-thirds majority in both houses of the Diet and a popular vote before any amendment to it passes into law. Abe currently is trying to sidestep this by ‘salami slicing’ tactics that gradually neutralise the pacifist provision, with a snip here and a snip there. A series of security bills were forced through the Diet in September 2015 that reinterpreted Article 9 and legalised Japan’s participation in collective self-defence operations. Many constitutional scholars deemed them unconstitutional, and large-scale public protests followed, even involving the traditionally apolitical and apathetic student populace. Abe seems undeterred, recently reiterating his desire to revise Article 9 but steadfastly refusing to reveal any details of how he will proceed. 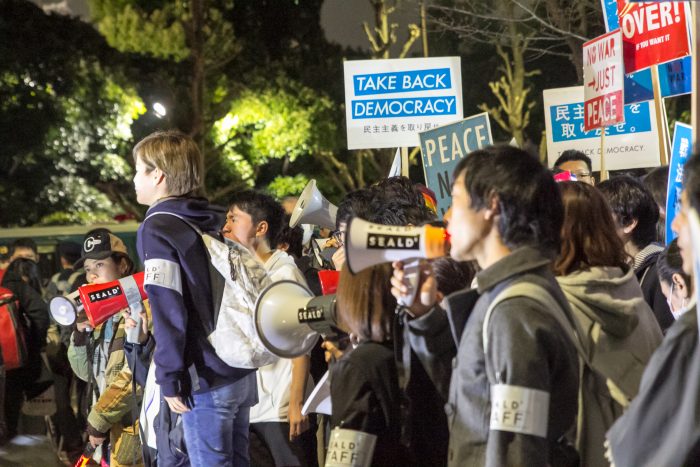 His hold over government has also strengthened, greatly helped by the lack of an effective opposition. The Asahi Shimbun, admittedly a left-leaning newspaper, says this has already gone too far. They argue although Article 41 of the constitution designates the Diet as the “the highest organ of state power… and the sole law-making organ of the State”, it has now become “totally incapable of performing its core functions”. Transparency has certainly suffered, notably during the recent cronyism scandal. The finance ministry removed unfavourable details about Abe’s involvement in the sale of state land to a nationalist school operator at a cut-price rate from its report to the Diet. Then, after calling a snap lower house election and winning by a landslide, Abe swiftly proceeded to reduce the time opposition Diet members had to question him and Cabinet members on the matter.

Cowing the Japanese media is another piece of the picture. A State Secrecy Law to give government the power “to prosecute anyone accused of “soliciting” or “instigating” a leak…of designated information”, might even be seen as redundant, since a self-censorship culture, known as sontaku, already exists in the media, with employees acting pre-emptively to curry favour with their superiors. As David Kaye, the U.N. special rapporteur, notes, “[n]umerous journalists…highlighted the pressure to avoid sensitive areas of public interest. Many claimed to have been sidelined or silenced following indirect pressure from leading politicians”. But the simultaneous removal of three TV anchors critical of Abe’s agenda after pressure on their employers may be taking such threats to another level.

So is Mr. Abe here to stay for the foreseeable future, and is democracy in Japan in real danger? If yes on both counts, democracy’s fate will reside in Washington. Japan remains hugely dependent on America in both economic and security terms, and a determined U.S. president has many weapons to wield in defence of the political culture that his country created in Japan. True, even under normal circumstances, Washington might speak softly of Mr. Abe, as it clearly wants Japan to play a more active role internationally. But the big stick is always there. The real question, then, is whether the current leader of the free world, a populist and apparent fan of authoritarian leaders, will choose to spur on Mr. Abe rather than bridle his ambitions.