How mathematicians united in pursuit of close primes

Josha Box explains the fascinating research behind close primes and how mathematicians are getting closer alongside the primes they work on.

In 1995, after spending more than 7 years secretly working in his attic, Andrew Wiles became a national hero (and a Sir) when he completed his proof of Fermat’s Last Theorem, arguably the most famous maths problem at the time. This example, and many more, have portrayed mathematicians in the eyes of the public as creatures of solitude, lone wolves. To a certain degree this is true – mathematicians usually publish in small groups at most – but this culture has recently started to change. This is the story of how, perhaps uncharacteristically, mathematicians united in an attempt to uncover some of the mystery of the prime numbers.

The beauty of numbers, and the reason mathematicians are obsessed with them, lies in their universality, their omnipresence. When physicists study our cosmos, they see pieces of an ever-changing universe, at one moment in time. Right now it is of great importance to study our sun, but other galaxies don’t have a star exactly like our sun and, moreover, in 8 billion years it will explode. In another galaxy, however, there will be numbers. In other universes (if those exist), there will be numbers. In 100 million trillion years, there will still be numbers. The idea of numbers, of counting, is not bound to any place or time. Whenever any distinction can be made between different ”units”, they can be counted. Putting five groups of three units together will give you a set of fifteen units. Always. Anywhere. The “concept” of a number may be a figment of human imagination, but the laws describing them are valid everywhere and anywhere. Omnipresent in the true sense of the word.

The building blocks of these numbers are called the primes. A prime number is an integer that is not the product (not “built up”) of two strictly smaller numbers. A prime number of apples, for example, can not be divided into a few smaller groups of apples of the same size. The primes under 20 are 2, 3, 5, 7, 11, 13, 17 and 19. Every other integer can be described as a product of primes, in a unique way: 4 = 2 x 2, 6=2 x 3, 8=2 x 2 x 2, 9=3 x 3, etc., hence the phrase “building blocks”. This universal truth was first discovered by Euclid over 2000 years ago. Even though our understanding of the primes has greatly increased by now, they are still notoriously mysterious creatures, and therefore intensely studied.

The numbers are infinite, but that does not necessarily mean the primes are infinite too. Looking at the list more closely, we see that primes become more and more scarce. 40% of the numbers up to 10 are prime, but only 25% of those up to 100 and 16.8% of those up to 1000 are. Is it possible that there is a largest prime number? Perhaps unimaginably huge, but still the last one? The answer is no, the primes are infinite. This, too, was first proved by Euclid

Let us ask another equally simple question. All primes except for 2 are odd, so two such primes must be separated by at least one number. When two primes are just two apart, as close together as possible, we call them twin primes. Examples are 3 and 5, 11 and 13 and 17 and 19. Since prime numbers become more scarce as their size grows, the average distance between consecutive ones rises too, making twin primes increasingly rare beasts. Much more so than the primes themselves. So are the twin primes infinite? 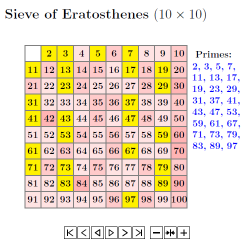 Eratosthenes’ sieve finding the prime numbers up to 100. Image:Peter Grill

The Frenchman Alphonse de Polignac was in 1846 the first to express his beliefs on the matter: he expected the number of twin primes to indeed be infinite, but couldn’t prove this. He was backed a century later by Hardy and Littlewood, who noticed that the distribution of primes amongst the integers behaves similar to randomly selected numbers. There is, for example, no formula to determine the next prime number if you know all those preceding it. These British mathematicians showed that if the primes were randomly selected (which they are not), then in almost every such selection the twin primes would be infinite. In that case the two could even estimate their growth rate. Nowadays, computers find larger and larger twin prime pairs, and their numbers match the growth rate predictions of Hardy and Littlewood. More and more evidence in favour of De Polignac, but no proof. No certainty. The matter, commonly referred to as the twin prime conjecture, became known as one of the hardest and most famous open problems in mathematics.

Then in April 2013, an unlikely hero shocked the mathematical community. Yitang Zhang, a maths lecturer at the University of New Hampshire who hadn’t published in over a decade, announced an enormous breakthrough: instead of finding infinitely many pairs of twin primes, he proved the existence of infinitely many pairs of close primes, where close means at most 70 million apart.  That’s right, not two apart, so not quite twin primes, but just 70 million apart at worst. That number might seem daunting, but 70 million is a whole lot closer to 2 than infinity is. For his achievement, Zhang was awarded a prestigious prize and a professorship at Santa Barbara. By the end of 2013, Terence Tao and James Maynard both independently had the same brilliant idea, which significantly simplified and improved Zhang’s work. They refined earlier methods for finding close primes by “sieving out” the other integers. Maynard, just 26 at the time, was in turn rewarded with the Ramanujan Prize and appointed full professor in Oxford last year.

Tao, on the other hand, was already one of the most celebrated minds of his time and he decided to unite mathematicians in an attempt to further lower Zhang’s 70 million bound. This was possible thanks to Timothy Gowers (Cambridge), who in 2009 had asked the readers of his blog, as an experiment, to collaborate on a problem in the comment section. This trial was so successful that it sparked the establishment of the Polymath Project, a platform facilitating online mass collaboration between mathematicians.  A participant of a Polymath project must forfeit any individual credit; resulting papers are published under the name of D.H.J. Polymath (although a list of names of participants in a project can be found online).  The work towards the twin prime conjecture initiated by Tao was the 8th Polymath project, and another success story; building on the Maynard-Tao sieve method, more than 20 mathematicians together reduced the 70 million bound to 246 unconditionally, the current world record. Assuming other unproven conjectures, the bound was even lowered to 6.

Nonetheless, this approach will never be able to lower the bound all the way to 2, leaving a proof of the twin prime conjecture out of reach. The problem is that sieves such as Maynard’ s and Tao’s cannot be made with arbitrarily small holes; more precisely, they have trouble accurately counting sets of only even or only odd numbers, such as twin primes. In fact, reducing Zhang’s bound to 6 is the best we could ever hope for. As is often the case, the primes are not easily seduced into revealing their true nature.

The twin prime conjecture thus remains a mystery, albeit one of extreme simplicity and vast universality. The twin primes are either finite or infinite, and, whichever is true, this is the case in every galaxy, every universe and for every unit the numbers represent, at any time. Whoever proves the conjecture will never be refuted, challenged or surpassed by modern insights. As the aforementioned G. H. Hardy once put it: “Archimedes will be remembered when Aeschylus is forgotten, because languages die and mathematical ideas do not. “Immortality” may be a silly word, but probably a mathematician has the best chance of whatever it may mean.”

De Polignac, Hardy, Littlewood, Zhang, Maynard and Tao are all in the history books. The question now is, who will trump them?

I fancy the chances of D.H.J. Polymath.