A Climate Changed – The Consequences of Insufficient Change

Our former Editor in Chief, Tom Harrison, examines the catastrophe unfolding before our eyes, and what ignoring it could cost.

Climate change is all too often described in intangible units; tonnes of CO2 or tenths of a degree rise in global temperatures. These numbers are either so massive or so small that they become imperceptible, so abstract as to be incomprehensible. They don’t show the human cost.

In Pakistan, the expectation of a tenth consecutive record-breaking annual heatwave has prompted the government to dig pre-emptive mass graves, to cope with the corresponding record-breaking death toll that is expected. Meanwhile, the southern United States has experienced two once-in-500-year storms in the last year, whilst the same storms have left the island of Barbuda uninhabited for the first time in modern history. In Switzerland, Bhutan and Bolivia melting permafrost is causing landsides that have killed hundreds. This alone is stark evidence of the deadly consequences of the roughly one degree of warming we are experiencing already.

In most cases though, anthropogenic climate change is not the sole cause of adverse events, but rather an amplifier that makes a bad situation much worse.

That is no truer anywhere than in Syria where, whilst some will chastise me for even suggesting it, climate change was a major cause of the war. In an already arid area, five years of extreme drought forced the overuse of aquifers and drove neighbouring countries to choke the flow (by way of hydroelectric dams) of the Yarmouk, Tigris and Euphrates rivers. This combined to cause a 50% drop in cereal yields and the loss of 80% of the nation’s livestock, pushing three million people into food insecurity.  It has been described as the ‘‘worst long-term drought and most severe set of crop failures since agricultural civilizations began in the [area]”, five thousand years ago. Out of work and going hungry, it is no coincidence that it was displaced agricultural workers that led the revolution.

Syria was not the first, and it will not be the last. As the glaciers recede, aquifers are drained and the monsoon falters, countries will have to find water elsewhere to feed their often growing and increasingly affluent populations. The head waters of the world’s great rivers will become battle grounds.

China is already trying to cement its claim to the sources of the Brahmaputra and Indus. Some believe they may one day divert them as the Yangtze and Huang He dry up, at the tragic expense of those who rely on them in Pakistan, Kashmir and Bengal. Even if they don’t, this control could be a powerful way for China to ensure their southern neighbours bend to their will. When one considers Pakistan has already stated it will utilise first strike if its water sources are threatened, the concept of three nuclear powers facing off over life’s most essential commodity is chillingly plausible. 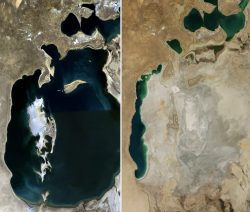 In East Africa tensions are already rising, as exploding populations and reduced rainfall on the once productive plains means Uganda and Ethiopia are increasing abstraction from the Nile, choking the flow through Egypt and Sudan to such a level that, in dry spells, the world’s longest river doesn’t reach the sea! If implemented, planned new irrigation projects would terminate flow even earlier, likely leaving the 20 million people of Cairo without water and potentially causing an Aral Sea style collapse of Lake Victoria. Some predict that before 2100, 80 million people will die in Uganda from shortages of food and water, with a similar number dying elsewhere in the region. One only has to look at the South Sudanese famine that affected 5 million people earlier this year to see that may well be an underestimate.

As great rivers cease to reach the sea, the low lying deltas will be inundated. The likely loss of much of the world’s ice will cause sea levels to rise by between 10 and 75 metres. This century we will not just see the loss of low lying coral atolls in Kiribati, The Maldives and Tuvalu, where plans are already beginning to be enacted for the relocation of their entire countries. We will see the inundation of global cities: Shanghai, New York, Singapore, London, Mumbai, Washington DC, Tokyo, Rio de Janiero, Jakarta, Lagos, Miami… The list goes on.

I have already had a glimpse of this future. The desperation as people scrabble first for the defences and then for the boats. The numb fear as you wait for the boats to return. The flashing thought that it might not. 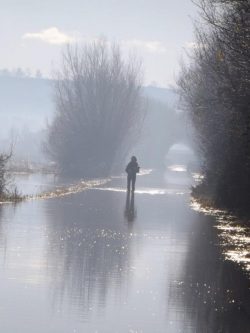 I have seen that that one day soon my home, the Somerset Levels, will become more water than land. We will leave and never return. Leave our houses, our schools and our businesses. Leave our lives. I hope we can leave on our terms but history tells me not. Like most places, we will probably be evacuated, assuming we’ll be back in a week, but after years in a refugee camp, communities will fragment as people leave to find a better life. By the time I retire, anyone living on the Levels will be little more than a distant memory.

In Southern Asia this is occurring on a whole different scale. From the foothills of the Himalayas to the Bay of Bengal and all the way out to the South China Sea, an increasingly erratic but intensifying monsoon is combining with increased glacial melt and fiercer, more intense typhoons to cause floods that, in 2017 alone, have displaced 20 million people. Even the Burmese government’s campaign against the Rohingya can be linked to the change; the military are cracking down on the long denigrated minority as massive floods in Rakhine and neighbouring Magway and Bago states force the Buddhist majority into historically Muslim areas.

Read more on the struggle of the Rohingya here

In the world’s most at risk country, Bangladesh, as much as 98% of the land will be lost to the sea, either permanently submerged or rendered uninhabitable by the regularity of the floods. Almost all the country’s more than 250 million people will be displaced, but they won’t have an easy exit: The Indian government, a non-signatory to the 1951 Refugee Convention, is erecting a 2.5 metre fence along its full frontier. In the current atmosphere of Hindu nationalism and with that country set to lose much of its coast, including the great cities of Kolkata, Mumbai and Chennai, their attitude towards hundreds of millions of Muslim refugees is likely only to harden. Even if those people could be resettled, the loss of the world’s fourth largest rice producer will cause hundreds of millions of people to become malnourished. It’s difficult to imagine a scenario which can avoid a death toll in the tens of millions.

Even now, one million hectares of fertile land are lost globally each year, but it is desertification that is the leading cause. Chad has lost 91% of its agricultural land to desertification, and this is a major cause of the war in Central African Republic as food exports from the north cease to flow. In Guatemala, El Salvador and Honduras 3.5 million people are now dependent on humanitarian assistance as temperature changes have altered rainfall patterns and caused crops to fail. Whilst in Bolivia, Brazil and Paraguay they have the opposite problem with the same result: increased glacial melt and intensifying rainfall are washing the soil away, reducing yields by 20% and pushing millions into food insecurity. Today, much of the Middle East, Iran and China are also facing food shortages caused by desertification. If the trends of the last twenty years continue, the lands which today feed 800 million people will become deserts in the next three decades.

On top of this, 70% of global fisheries have already collapsed due to overfishing and those which remain will be gone by 2035, but human caused climate change is accelerating the demise and preventing recovery. Higher levels of CO2 are acidifying the oceans and causing fish eggs to denature, preventing their reproduction, while higher temperatures and the commensurate sea level rises are suffocating the reefs which support 25% of marine life. Even the changes in ground cover are having an effect; rising temperatures are extending the global growing season for wheat, reducing the amount of iron dust that blows into the ocean and as a result the amount of phytoplankton, which forms the base of the aquatic food chain and requires iron for growth, has dropped by 40% over the last decades. Nature simply can’t adapt fast enough to the changes we are bringing about, with some predictions suggesting that as much of 90% of the aquatic life that existed at the beginning of the 20th century will not exist by the end of the 21st. Our remaining fisheries provide food for the equivalent of 500 million people, the loss of such an important source of protein would be devastating.

The widespread malnutrition, combined with large-scale movement of people, is leading to more frequent, often perpetual, outbreaks of disease. Climate change is allowing diseases to spread into new ranges and mutate more quickly where they already exist. Italy is experiencing its first set of chikungunya fever outbreaks, Zika rages throughout new areas of South America and an epidemic of dengue fever is currently ravaging Tonga, New Caledonia and Fiji. So far these outbreaks have only killed dozens, but in West Africa the Ebola outbreak killed over 11,000 as climate change linked desertification pushed humans into closer proximity with the bats that carry the disease. As the century progresses new outbreaks will only spread further and take more lives, particularly as antibiotic resistance grows.

The next decades will be a crisis beyond anything humans have ever encountered: vast epidemics with hundreds of millions displaced and billions lacking food and water.  But it will be as nothing compared to the likely ending to our story if we continue on our path of insufficient change.

Rising temperatures will cause melting the permafrost and warming oceans, leading to a massive release of long-buried methane (a potent greenhouse gas), warming the planet at a significantly faster rate than today. These much higher temperatures will combine with the planet’s relatively high atmospheric oxygen concentration to form vast forest fires, rapidly engulfing all the world’s remaining biomass in a rock-melting firestorm to end life on Earth. Within days acidic cycles will come to dominate the atmosphere and temperatures will soar. In as little as 200 years the earth will resemble Venus. Lifeless and inhospitable: even the most extreme bacteria would be unable to cling on.

This is not a future from the pages of science fiction, is already in motion; the permafrost is melting, the oceans are warming and the methane is beginning to leak out. If we continue down our avenue of insufficient change then in twenty years it will be too late. We won’t be trying to save our way of life, or even humanity, we will be trying to salvage a planet fit for even the most basic forms of life.

Are you ok with that?

Previously our Editor in Chief, Tom Harrison is now our webmaster and has written extensively on the future of energy and climate change. You can find his column here.