The Economics of Independence: What’s in it for Catalonia?

BARCELONA – There are several reasons why a region might want to secede. Political oppression may be one. As history has constantly taught us, limitations on individual rights and liberties will most likely spark the raging flames of independence. Other motives may stem from significant cultural diversity, a lack of national cohesion or contradicting views regarding the future development of the country, to name a few.

Catalonia’s independence seems odd. It seems odd not only because it is a relatively recent phenomenon, with the first independence referendum originating in 2006, but because its roots and motives are different from all the reasons listed above.

The region has been a largely autonomous one since the 1978 Spanish Constitution and shares more than 300 years of history with Spain. The movement does fit into the broader pattern of nationalism that has recently taken Europe by storm, but the Catalan pro-independence programme is both pro-European and internationalist, sharing with Spain equivalent views for the future development of the region and state.

“For the unity of the language and the Catalan countries” – Census reveals 73% speak Catalan in Catalonia, 95% understand it, 56% can write it

So why part ways then? Rather than focusing on the factors contributing to the politics of independence, which have been unceasingly reported in the last few weeks, this article will analyse a more concrete matter: what are the economic gains (or losses) that will affect Catalonia if it succeeds in its ongoing crusade?

On one side of the coin, there are the expected economic returns. Catalonia has the highest GDP out of all other Spanish regions – 266 billion euros, accounting for 19% of Spain’s GDP. The Catalan province has always been historically labelled as Spain’s industrial heart, with manufacturing representing 21% of the Spanish GDP. The rest of the country accounts for a mere 17%. The GDP/capita of the region is also higher than the average for Spain – 25.000 euros compared to 24.000 euros – with Catalonia having 19% of the overall amount of companies in the country. When it comes to foreign investment, Catalonia yet stands first amongst the rest of the Spanish provinces. The aggregate flow of 37 billion euros invested in the region represents more than a quarter of the total investments in Spain.[1]

All the numbers above prove that the region is wealthy, but most of all significantly wealthy compared to Spain’s average. What they do not prove however is a valid economic motive to secede. Being the richest in the room does not necessarily mean you need to exit it. However, when the above factors are combined with Spain’s regional and diversified fiscal regime, identifying the Catalan’s main economic drive for independence becomes an easy task. Although the region has 16% of the Spanish population, it pays 20% of its taxes and only receives 14% of public expenses. Put simply, each year the Catalans pay around 10 billion euros more in taxes to Madrid than they get back (around 5% of the whole regional output).[2]

Although the latter argument may seem convincing, it is nevertheless a priority to also look on the other side of the coin, where we can find the economic costs of the independence. While 10 billion euros a year might sound like a big sum, they are nothing compared to the price that the region must pay for its secession.

As proven by the clashes which occurred on the day of the referendum, Spain will not take the act of independence lightly. With 35.5% of all Catalan exports being destined to the Spanish market, trade boycotts and repercussions are bound to happen and will definitely hit hard. Moreover, Catalonia’s whole economy is dependent on the EU: 70% of all foreign investment and 65% of all exports from the region involve in some way the common market. To continue to be part of the union, Catalonia would need to re-apply to the candidacy procedure. Even if the region fulfilled the necessary requirements for membership, Spain would still have the final say as a unanimous vote is needed in order to accept a new member. This means that Spain holds a de facto veto on Catalonia’s membership, thus nullifying the independence struggle of the region as the country would still hold the reins of Catalonia’s economic future. Losing access to the European market would lead to a significant disruption in the supply chains of the region, undoubtedly representing a disastrous outcome for the Catalan economy. As ING economist Geoffrey Minne stated:

“The economic cost for Catalonia could proportionally exceed that of Brexit for the UK.”[3]

Adding further fuel to the fire, there is also the question of debt. Catalonia owes 77 billion euros, 50 billion of which are indebted directly to Spain. If it gains independence, the newly formed state must pay back such a sum over a period and at an interest rate that will be negotiated with a hostile government. 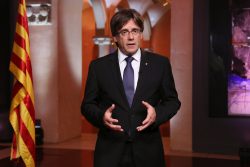 The president of the Catalan Government, Carles Puigdemont, was the main architect behind the October 1st referendum

The uncertainty created by the independence movement is also bound to have an impact on both private investors and consumers, with undoubtedly negative repercussions on Catalonia’s economic growth. Major businesses and banks have already decided to move their legal headquarters to more politically stable regions in Spain. These moves are calculated and derive from the crushing evidence for the huge economic costs that independence will inevitably lead to. The Spanish Ministry of Economy estimated that a secession would shrink Catalonia’s economy by 25-30% and might double its unemployment.[4] An unbiased opinion, that of credit rating agency’s S&P, shows a possible deterioration in the region’s credit ratings, as the agency recently placed Catalonia on the negative CreditWatch.[5]

With the region’s declaration of independence and the Spanish government’s decision to suspend Catalonia’s self-rule by triggering article 155, it is fundamental to understand that the debate over this struggle cannot be judged solely by economic arguments. Yes, it is true that leaving the EU, increasing uncertainty and thus dampening consumption and investment are all major ingredients to this economic cocktail of chaos. And it is also true that such costs will never be offset by a sum of 10 billion euros. Nevertheless, the determination of Puigdemont’s government and of what is now a significant percentage of the Catalan population is living proof that the Catalans are ready to pay any price necessary to assert their national identity.

Economics seems thus unable to explain the Catalan poker match with the Spanish government. This is because, until participants continue to experience misinformation, overconfidence and emotional biases, they will be bound to make decisions based on irrational calculations. We should consequently be wary of understanding such events through purely rationalist lenses and for this reason, a decoupling of economic rationality and political performance would largely benefit all parties seeking explanatory theories. Nonetheless, poker has never been a game dictated solely by reason, and with irrationality being embedded within human nature, it is important to remind ourselves that economic explanations will always be significantly impacted (and disrupted) by political events.