Voluntourism: What Not to do Next Summer

By the end of the 2010s, it is estimated voluntourism could represent $25-30 million worldwide. Stu Lucy critiques voluntourism, examining the concerns and potential dangers of the volunteering industry.

The time of year is upon us once again when young adults settle in to university life, commencing or continuing their student experience. During these next few months students at all stages of study will no doubt be harassed by enthusiastic, supercharged and vibrant individuals, presenting an enticing selection of unique and fantastic volunteering opportunities informing them they can and should make a real and lasting diﬀerence in the developing world next summer.

Whether it be renovating a school, teaching English to primary level students or building a playground, millennials are often bombarded with various forms of marketing promoting products that oﬀer the chance to see a remote and often exotic part of the world, embrace its culture and most importantly give a little back to an in-need community, institution or group of individuals. I am of course taking about voluntourism.

Indeed many are seduced by such attractive oﬀerings; with some industry experts estimating as many as 10 million people take up the challenge and head oﬀ to the developing world to make their mark. However, how many of these voluntourists actually stop to consider whether their actions may in fact be doing do more harm than good?

The issues surrounding voluntourism are complex; problems arise through every level of the process and eﬀect the situation in diﬀerent ways. The best place to start investigating this pernicious industry is with the companies themselves. In recent years the voluntourism market has exploded, especially products aimed at students, with more and more mostly private companies appearing to take their piece of the estimated $1.5-2 billion pie. Although there is also a signiﬁcant number of not-for-proﬁt charity enterprises oﬀering similar experiences, they are in direct competition with these private organisations to attract volunteers and their necessary fundraising. This is true even more so as secure funding in the continually expanding development sector is becoming ever more diﬃcult to come by. Thus, third sector players inevitably become embroiled in the competitive stage of Late Capitalism.

The rules of this game dictate that players must create the most streamlined and eﬃcient package in order to oﬀer the most appealing (read: cheapest) product whilst maximising their bottom line. Stakeholders, CEOs and investors are to be graced with the fruits of this labour on a regular basis via healthy growth reports, dividends and returns on investment. In order to be a successful player therefore, one must eﬃciently manage all the diﬀerent aspects of their products; saving money wherever possible to ensure maximum levels of proﬁt. Herein lies the ﬁrst problem with the voluntourism sector.

Given these organisations adhere to the bottom line of proﬁt above all else, the development project portion of their product is at risk, and often ends up, becoming an expense to be eﬃciently managed in much the same way as travel logistics or excursions. This has obvious consequences for the individuals and communities to which these projects are administered. 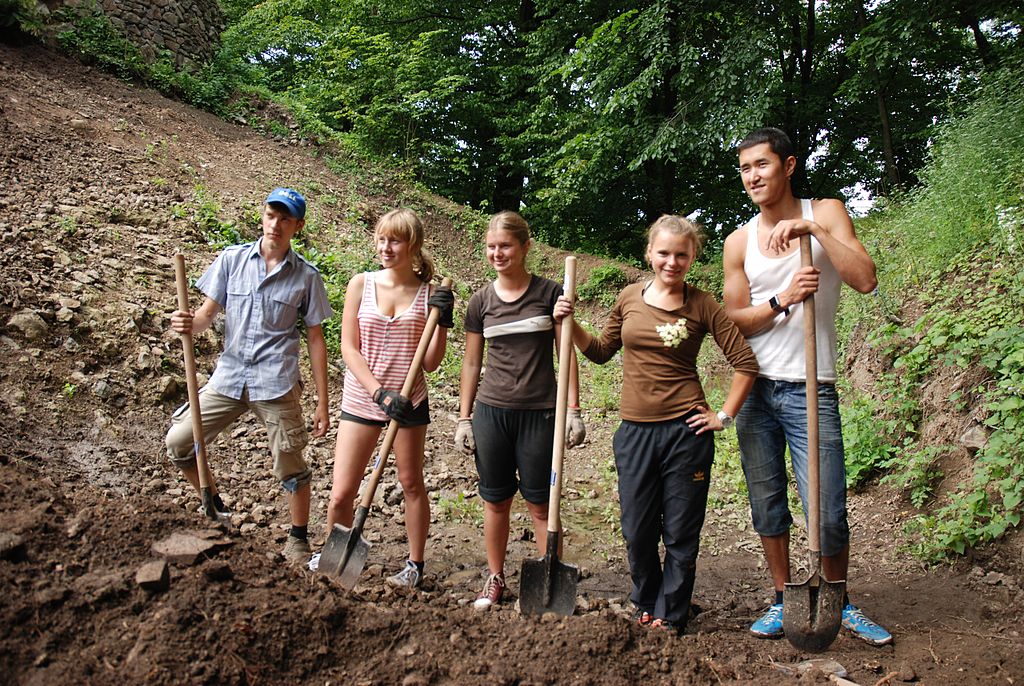 Although horror stories of arriving at your destination to ﬁnd you have been completely abandoned without even a bed for the night are rare, there are all too common negative consequences when embarking on volunteer programmes abroad. Often, volunteers are unskilled in the task that they have signed up to perform resulting in poor quality project delivery. From brickwork being deconstructed and rebuilt by local tradesmen when volunteers retire to bed, to half-ﬁnished latrines being left to erode due to a lack of local funding available to complete them, ill designed, poorly executed and badly managed projects are common place across the developing world.

This unfortunate situation comes as a consequence of a company utilising the compassion and altruism of helping those more impoverished than oneself as a marketing tool to attract custom, then failing to both ﬁnancially and logistically ensure the projects they choose to implement are carried out to a suﬃcient standard. Whether it be not taking the time and spending the money to properly train volunteers pre-trip, cutting costs on staﬃng by hiring low paid (or even volunteer), unskilled trip or project managers, or cutting back on project material costs, the projects inevitably bear the brunt of companies primarily focused on their margins in a highly competitive sector.

The extent to which voluntourism aﬀects communities does not end with the physical projects; the social consequences can be equally, if not more damaging to the host communities as well as the volunteers themselves. All too often volunteers are culturally and mentally underprepared to assimilate into the communities in which they will reside. What can potentially follow is a variety of inappropriate incidents, such as adorning unsuitably revealing clothing in areas of a highly conservative persuasion, drunken students making fools of themselves in sober, Islamic communities or engaging in sexual acts with locals in areas of high HIV prevalence. In the most extreme cases volunteers may take advantage of their privileged position and engage in abhorrent acts of depravity. Such outcomes again result due to the ill management of volunteers; poor pre-trip cultural education and/or a lack of qualiﬁed, motivated staﬀ to manage a group of emotionally aroused young adults. Sadly, many companies recognise (but never admit) that as they are dealing with mainly one-time customers, once they have your money, your welfare and experience becomes an externality. If you don’t enjoy yourself, well that’s a shame but there’ll be a whole new bunch of student-loan-wielding freshers along next year to take your place.

What of the communities that receive these underfunded, ill managed projects, or that have to accommodate these culturally unaware, naive volunteers? Given that the whole point of the trip in the ﬁrst place is to make a diﬀerence to the developing world, what is the impact on people living in some of the worlds toughest situations? Although initially pleased to learn of the development project oﬀered to their communities, many become jaded with they way they are treated by the companies they work with. There is often an arrogant assumption that because of the abject poverty these parts of the world face, they will and should be grateful for what is being given to them, this assumption often leads to a power balance that ﬁnds some communities having terms dictated to them and overly high expectations put upon them in order to receive this ‘gift’. Over time some communities ﬁnd themselves wondering whether it was worth signing up to the programme at all; upsetting their daily routines and aﬀording special accommodation and food to make these, at times, demanding company representatives and their unruly volunteers feel welcome, all for a water pump that lasted 3 months. In this context one has to ask where lies the line between helping, and using.

Then there are the broader, hypothetical implications of such diﬀerent cultures being thrust upon one and other in such an unregulated manner. Given that the vast majority of the developing world frequented by such voluntourists generally participate in subsistence agriculture-based economies, what would the eﬀect be on such young and impressionable minds within these communities when exposed to the material consumption based lifestyle of individuals from hyper-developed capitalist lands? Given that Westerners are often looked up to by such young minds, in part because of the wealth they exhibit, are these voluntourists not creating an impression that foreign ideals and norms are better than their own? Given the acknowledged eﬀects in the latter half of the 20th Century of structural adjustment programmes and debt relief ushering in free market ideals of consumption, individualism and material gain, should we not be allowing individuals within these economies to decide for themselves the merit of such systems, rather than presenting them with Western archetypes devoid of context? All theoretical questions of course but important nonetheless, especially as it is now evident that our neoliberal capitalist economic system is producing previously unknown levels of inequality, suggesting it may not be worthy of the global replication that is so pervasively underway.

Although a portion of voluntourists come away from their experience with a new found purpose or an enlightened moral sense of their place in the global community, this is rare and often short lived. Soon the demands of a fast paced, consumer capitalist world take hold and poverty porn proﬁle pics are soon substituted for Saturday night 3am selﬁes. Meanwhile the communities exposed to these Western tourists may or may not have something physically, socially or economically beneﬁcial to show for it. Problematic volunteer programmes can often lead to solidifying a belief that Mzungus/Oburunis/Aibus are tourists more than volunteers, oﬀering little in the way of meaningful change or assistance to their challenging, humble and often meagre existence. What can stem from this is an economic incentive, often among young unemployed adults, to extort money from these voluntourists through a whole host of socioeconomic ploys including as career boyfriends, through guilt letters or even selling oﬀspring to orphan dealers. This is a natural evolution given the circumstances of both groups relative economic positions but one made worse by projects that fail to foster a mutually beneﬁcial relationship between the two groups in play. 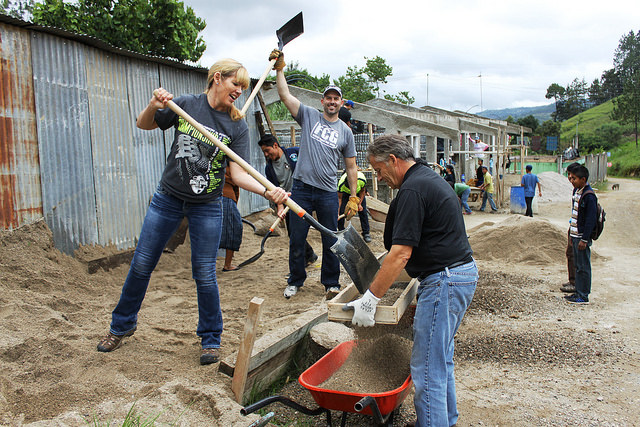 Voluntourism can have damaging effects on local communities: Hug It Forward

I would be at fault of course not to highlight the presence of organisations that do oﬀer chances to take part in ethical, well managed and eﬀective development projects, and that indeed students are becoming more inclined to choose such programmes. Projects that are suﬃciently funded and ethically designed that work closely with beneﬁciaries to determine their need and concerns are indeed on the rise. However, as more companies are beginning to recognise that this new market oﬀers further ﬁnancial reward, many are changing tact oﬀering products that adhere to this new ethos. As this ethical market expands, will this not ultimately result in a race to the bottom also, with the incessant need to compete and undercut reincarnating new versions of the very problem this new market sought to remedy? Only time will tell whether the insidious tumour of growth capitalism will sink its claws into this attempt to ﬁx a rotten and broken sector.

So if you’re thinking about taking that rite of passage as a volunteer next summer; wondering whether to build a school in Tanzania or teach English in India, or have been approached by a company or charity oﬀering you the chance of a lifetime or to give something back, slow your roll and ask yourself a few questions. Personally I think it can be as simple as this: Who’ll beneﬁt the most, me, the community, or the company? If you come to the conclusion that it’s anyone other than the second, then it’s perhaps time to reconsider.

There are plenty of ways to give something back without ﬂying half way round the world to do it. Investigate the Eﬀective Altruism movement, although I don’t agree with their entire philosophy, they make some points and is a good place to start from if you’re serious about doing good. Consider volunteering a little closer to home where the impact of your presence won’t be so potentially damaging; soup kitchens, food banks and shelters are all great places to start. But if you’re absolutely hellbent on the whole African experience thing I beg you, spend serious time researching the most ethical and well run programmes, and when you ﬁnd one you’re happy with give them half your allocated money. Then spend the other half on a safari.