Crisis in Calais: Tales from the Jungle

Dora examines the history of the controversial refugee camp, ‘The Jungle’, at Calais, tracking its development from its conception in 1999 to its current standing in today’s turbulent climate.

The migrant population of the Calais ‘Jungle’ lead a lifestyle inherently marked by resistance and struggle. The pattern we have seen over the last decade of the Jungle’s existence is one of resistance and rebirth. It has become an emblem of the European migration crisis that has enhanced and marred widespread political issues such as the Syrian War and Britain’s contested exit from the European Union.

The continuously shifting population, which grew exponentially from 1999 until its closure in 2016, was predominantly African. According to Nordéclair, approximately 62% of the migrants in the Jungle were men, with a mean age of 33, of non-European origin. Fluctuations in demographic correlated with contemporary global conflicts.

The Jungle was erected in its earliest state in 1999, in the midst of widespread migration during the Second Chechen War. Exiled migrants travelled west through Europe, seeking safety and a better quality of life. Located near the Port of Calais, it was originally endorsed by the French Red Cross and known as Sangatte.

The camp was initially designed to shelter approximately 600 migrants, but by 2002 it was housing nearly three times that many. As its population increased, the living conditions deteriorated. Nicolas Sarkozy closed the Sangatte camp in 2002, and soon after a ‘jungle’ formed by the twice-exiled residents in the local woods near the port.

The ‘Jungle’ became a firm establishment in the European migrant discourse. Despite its illegality, it was a relatively safe space for a large group of similarly marginalised people. As the Iraq War continued through the first decade of the 21st century, thousands of migrants fled conflicts in Iraq and its surrounding battleground states, resulting in a dominant demographic of Iraqi Kurds.

Many of these migrants’ eventual destination was the United Kingdom. Without utilising official channels, thousands of would-be asylum seekers made their way over the English Channel by illegal means, the most common being smuggled in the back of a lorry destined for Dover. Some migrants bribe drivers for this service; others risk capture, injury or even death when they hide in lorries or shipping containers.

The Jungle is not the only place where this kind of desperation is palpable – in recent months, there has been a wave of illegal migration via the seas. This phenomenon is seen most frequently in the Mediterranean Sea, for those attempting to bridge the gap between Turkey and Syria, and also on the other side of the world, between South East Asia, Papua New Guinea, Indonesia and Australia.

Migration is the source of some of the world’s most controversial and divisive issues. Camps such as the Jungle, and Australia’s camps in Nauru and Manus, incite outrage from human rights activists.

The more established the Jungle became, in its physicality if nothing else, the more accepted it became within the local cultural discourse. As it lay ideological foundations in Calais, demand grew for it to be recognised as a legitimate shelter.

By 2009, amidst the continuing violence in the Middle East and heightened tensions in Syria particularly, the conditions in the camp worsened considerably. Squalor contributed to an unstable environment, where violence, excessive drinking, and generalised anti-social behaviour was rampant. The French government stepped in again, destroying a large proportion of the Jungle in April 2009 and expelling residents. Within three months, a new camp had grown out of the ashes, the migrants enacting a phoenix-like reincarnation. Come September, an estimated 800 migrants had set up another camp, which was forcibly shut down by authorities, who this time arrested and detained a third of the migrants. 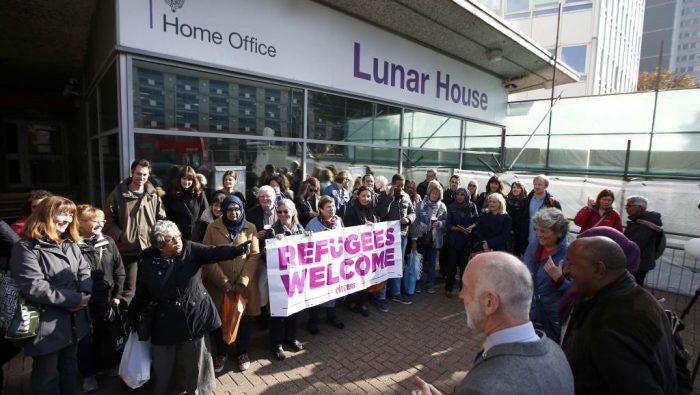 The Jungle has not been marked, as other informal and similar arrangements have been, by riotous violence towards authorities. The collective ideology seems to have been focused almost entirely on progression, of reaching the ultimate destination of permanent refuge (without formally seeking asylum). Within the camp, however, external events were reflected in the escalating violence of the domesticated Jungle.
Civil wars in the African nations of Somalia and Eritrea encouraged the exile of a further 1,000 migrants in mid-2014. The Jungle’s population, an amalgamation of people from Iraq, Afghanistan, Sudan and the Horn of Africa.

The majority of Jungle inhabitants do not speak English. The socio-political groups resisting the influx of Calais migrants, in 2016, state this as a reason to reject them from the UK, as well as their non-adherence to process and the cost of providing them with benefits.

As unrest in Syria drove further increase, violence became a common occurrence. To help alleviate overcrowding, the French authorities built a separate shelter by the camp. Erected from shipping containers, it was, at the very least, a roof over migrants’ heads, but it lacked any form of running water or sanitary facilities. It made for a humiliating existence.

A proportion of Jungle residents moved to this new camp, but a significant number resisted the move. As well as the inadequate living facilities, migrants spoke of their fears that if they left the Jungle and moved to an official government facility, they would be forcibly stopped from going to Britain.

In February 2016, the BBC noted the disparity between local officials’ estimates of the Jungle’s population at 3,700 and Help Refugees estimate of 5,497. The Jungle’s wildly spiralling population levels were undeniable, and, at the beginning of the year, French authorities started a process of controlled removal – forcing the migrants to migrate yet again.

Medicins Du Monde (MDM) reported the deterioration in Jungle living conditions. Most human aid authorities have reserve plans in case of large-scale emergencies: MDM executed such a plan. Their mobile action plan, designed for minority groups such as AIDS sufferers, sex workers and the homeless, led to 31,000 consultations in the past few years.

Francoise Sivignon, president of MDM, said: “Our organisation has a huge amount of patients, but what is increasing most is our frontline and border consultations at Vintimille and Calais.

“The responsibility of the state is to take charge of the healthcare of these people (the vulnerable) who are experiencing extreme physical suffering.”

Finally, in late October 2016, the Jungle camp was officially cleared. Upon closure, Help Refugees estimated its population at 8,100 migrants. These statistics, however, have not been verified since the Brexit vote in June, when projected figures rose to over 10,000 people.

Universal discourse dictates that children’s welfare is of utmost importance. Therefore, children are often the first to be welcomed into a country as a refugee. There has been great dispute about the age of the minors entering Britain, with The Sun providing a questionable age-checker on their front page to determine the eligibility of incoming migrants.

MDM also reported a rise in the proportion of lone migrant minors who were being summoned by the French state for ‘bone age determination’ tests, which are carried out to determine subjects’ apparent physiological age and are largely deemed unreliable.

Such tests were widely reported in the British media. Tabloids covered their front pages with images of unnamed migrants, comparing their apparent ages with photographic tests. Other publications were quick to point out the futility of such superficial test conditions, further supporting the instability of the entire process.

The idea of ‘bone determination tests’ was encouraged by David Davies, the Conservative MP for Monmouth. He claimed that, “People are desperate… and will say what they need to say to get in [to the UK].” This despite the Home Office and the British Dental Association refuting this technique’s accuracy.

Davies was further criticised by the Liberal Democrat leader Tim Farron, who decried his stance as, “a shameful attempt to smear refugees instead of welcoming them as they rebuild their lives in Britain.”

Unsubstantiated reports of sexual assault perpetrated by migrants are the latest incidents reported in the tabloids, reinforcing a negative attitude towards migrants. The Sun reported an attack on one of the volunteers, saying the alleged victim hadn’t reported the attack because of “concern that it would undermine all the great work that had been done to help refugees.”

Despite a persistent media influence discouraging refugees’ attempts to enter the UK, a group of Syrian refugees told Al Jazeera that their “primary objective” was still to join family in England.

“The French government is giving us just one month in the refugee centres and after that we don’t know what it’ll do,” said Yamin, from Damascus. “We still have the same issues, we have to go to England but how, we don’t know.”

The Refugee Rights Data Project undertook a survey before October’s eviction, with an overwhelming 59% responding that they would stay in the Calais locale after the Jungle’s clearance.

The Project also found that “a high proportion of camp residents wish to seek asylum in the UK rather than any other European country because a) they speak English, b) they want to be reunited with family members, or c) they perceive the UK as the most plausible option for continuing their education.

“Despite the tireless efforts of volunteer organisations in the Calais camp, thousands of displaced people are denied adequate access to information. Most notably, the wish to gain an understanding of UK immigration rules, why it is so difficult to reach the UK, and importantly, how to get there legally,” according to the report. 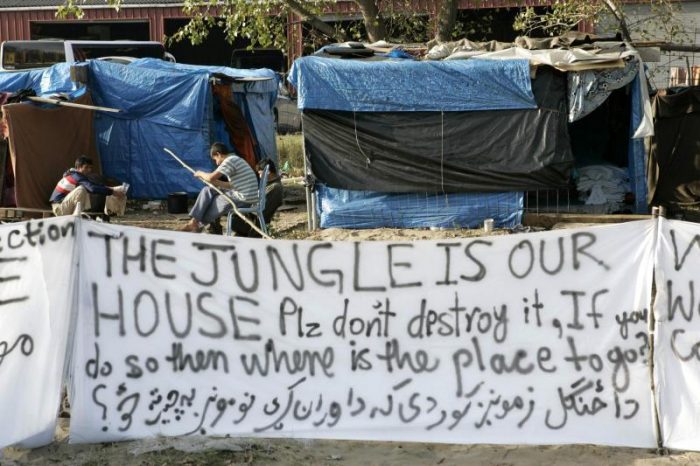 Maisie, an English volunteer who worked at the camp this summer held a drastically different impression of the Jungle residents than the popular tabloids. She spoke of a collective “very positive impression of the refugees” and “a very compassionate attitude” towards them, saying no one “ever had a bad thing to say about them.”

So, is the closure of the Calais Jungle for the best? Maisie believes so.

“The French authorities did everything they could to make their lives as miserable and uncomfortable as possible and at least now they will have a chance to live in a real house (not a tin can) and have some dignity.”

“I feel it is likely that, without the camp, those who would have previously tried to make it to England will now abandon hope as the prospects of making it to the UK are incredibly bleak.”

“It’s not good enough to say that refugees should be grateful to live anywhere that takes them in; they have a basic human right to state preference of where they are relocating. If we were in the same position, we as British citizens (with a sense of entitlement) would not only hope but expect to be able to move our family to our first choice.”

This sense of entitlement is, perhaps, the driving force for the negative coverage of the Jungle’s migrants. Migration is a contentious topic in 2016, across the world, and the next few years promise to be tumultuous in terms of expulsion of illegal migrants in many countries, Donald Trump’s America being the most notable. In the next few months, and as France move into the age of a new presidency in 2017, migrants will be listening carefully to see what action the state takes next.

Dora Allday is a English and Theatre Studies finalist.