Climate Change: The Forgotten People and the Displacement of Nations

Aine Clarke discusses the multifarious struggles that nations, rich and poor, face against the impacts of a changing climate.

A thin patch of ice in the fast ice east of greenland. taken from the helicopter. [Credit: fruchtzwerg's world, Flickr]

“A slow and insidious form of terrorism against us…”

Consider a scenario: A small community clinging to a spit of land in a raging sea, facing imminent destruction as their home is decimated by the very element that sustains their livelihood. No, this is not some fictitious doomsday scenario concocted by a virtuoso of the Hollywood blockbuster genre; for the 400 indigenous Alaskans of the fishing community of Kivalina, this is real life. The rapid melting of the arctic ice, which protects this village from storms and rough seas, is making the island uninhabitable. Furthermore, coastal erosion will render the island unliveable by 2025.1 Of course, gradual coastal erosion is commonplace throughout the world, but with sea temperatures rising steadily over the past two decades, the island nation’s untimely end is approaching at a pace unanticipated by even the most pessimistic of climate scientists. The struggle for survival doesn’t get much more real than this.

What is to be done to protect this traditional Inuit community, so far removed from the long, narrow corridors of Washington DC, the money churning banks of Wall Street, and even the innovation hubs of Silicon Valley? This community is the negative externality of the world’s laissez-faire policy on climate change – the unintended consequence of decades of environmental plunder. It is an embodiment of the famous Melian dialogue: ‘the strong do what they can and the weak suffer what they must’. 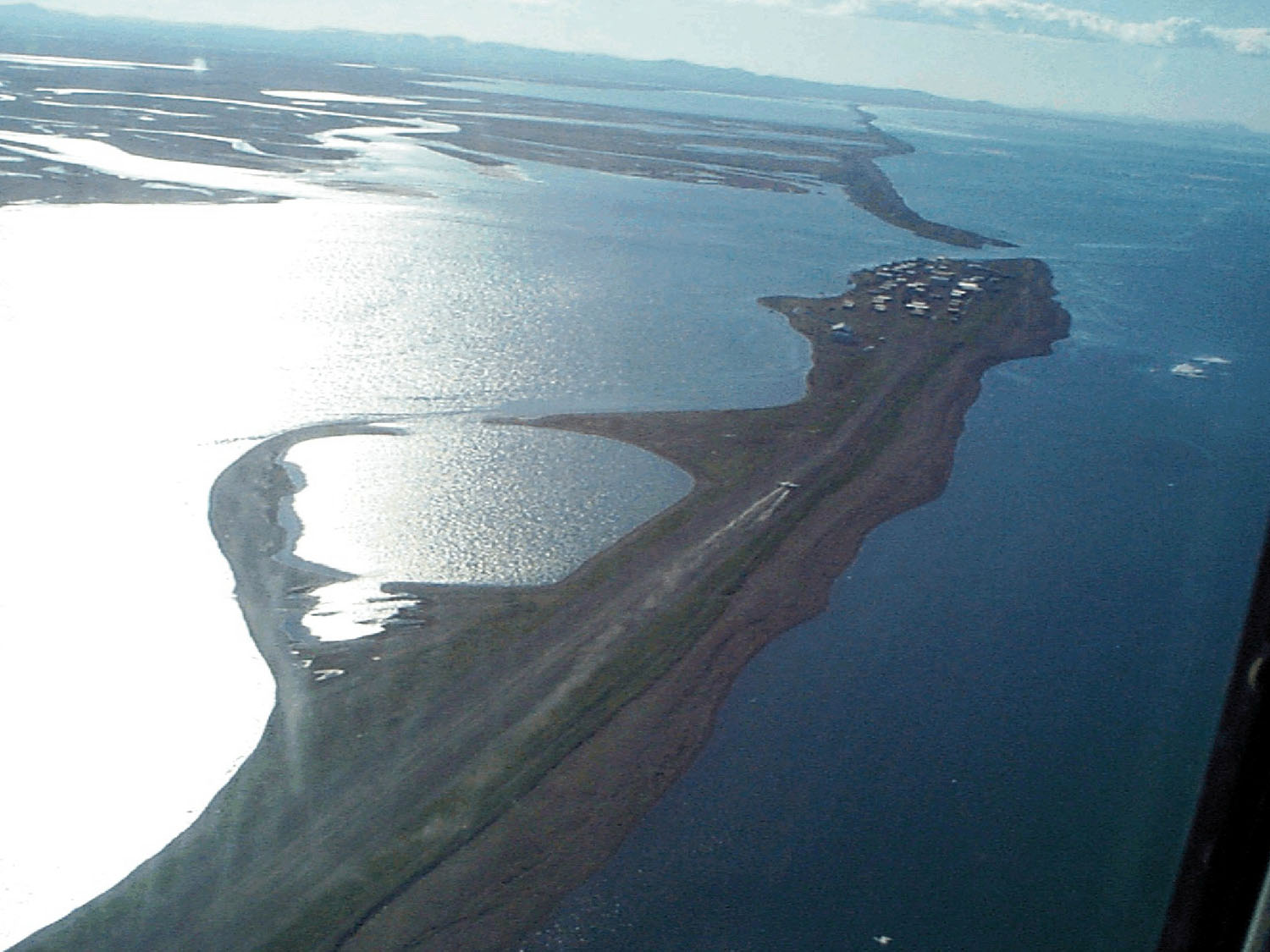 The community may be the U.S.’s first case of what I will refer to as environmentally displaced persons, but it won’t be the last. The UNCHR calculate the number of forcibly displaced people globally at an unprecedented 61.5 million for 2016 alone. Refugees account for 21.3 million of these, a figure that has risen dramatically from the previous record of 19.5 million in 2014.2 These people will not be migrants in the truest sense of the word; they will have been unsettled against their will with little or no possibility of returning home. Neither will they be classified under the narrow definition of refugee, laid down by the UN as a person ‘who has been forced to flee his or her country because of persecution, war, or violence’.3

Herein lies the first problem; nomenclature. Whilst common identifications such as ‘climate migrant’, ‘climate change refugee’, ‘environmental migrant’, ‘environmentally displaced person’ intuitively mean the same thing (i.e. human migration which has resulted from a determinable environmental driver4) the legal jurisdiction surrounding the terms cannot be so easily fudged. The current widely accepted definition of environmentally displaced persons, as outlined by the International Organisation on Migration is: ‘those who are impelled or induced to migrate because their livelihoods are rendered unsustainable by proliferating natural disasters or the irreversible degradation of the environmental resources, resulting on the slow onset impacts of rising sea levels and desertification’. This new category of involuntary migrants abides in a legal vacuum, for which there is a significant rights protection gap.5

The second issue is the nature of the problem itself. Environmental migration is nothing new; whether permanent or temporary, it has always been a traditional response or survival strategy of people confronting the prospect, impact or aftermath of disasters (Hugo 1996). Significant archaeological research has shown that the great mass migrations out of Africa were spurred on by abrupt changes in climate conditions, driving vast swathes of the population North in search of a more amenable habitat.6 Since records began, migrant flows due to changing weather patterns and natural disasters have been well documented, but today the scale of the problem has reached unprecedented proportions. Intense resource extraction, deforestation, unsustainable agriculture and aquaculture practices and processes related to large scale industrial manufacture have augmented the impacts of natural disasters. The instances of famines, which throughout history have been linked to sudden variations in climate, are not only occurring more frequently but are also more intense in recent years, exacerbated by man-made climate change.7 These environmental disasters impact the lives of millions of people across the globe, disproportionately affecting developing countries such as those in sub-Saharan Africa and southern Asia. The UN warn that this year alone more than 36 million people face hunger across southern and eastern Africa, due to climate change induced anomalies in the El Nino weather pattern.8 It is a sobering reality of the 21st century that this is occurring despite an annual global wastage of 1.3 billion tonnes of food – about a third of all that is produced.9

With rising atmospheric temperatures, more water vapour can evaporate and act as a fuel for storms.10 Tropical cyclones with high wind speeds like that of hurricane Matthew, which in October brought Haiti to its knees, are increasing in both frequency and intensity. Matthew only directly affected 10% of the population, but it struck with enough ferocity to kill at least 842 people, displacing 752 others.11 Although technological advancements meant that the weather mass was spotted on radar before impact, the country, still reeling from the devastating earthquake in 2010 had neither the infrastructure nor financial capabilities to defend itself in time. The UN estimates that 1.4 million Haitians need urgent humanitarian aid as renewed cases of cholera spread through affected regions. The political ramifications of the storm are no less severe; in the midst of chaos and uncertainty, elections have been postponed until November, solidifying the state of emergency.

Although developing countries bear the brunt of the impacts of climate change, industrialised nations are also feeling the pinch. In California, the ongoing drought cost the state $2.74 billion in 2015 alone – with job losses amounting to 21,400.12 Scientists estimate that ‘unmitigated global warming will leave global GDP per capita 23% lower in 2100 than it would be without any warming’.13 The findings of this study are significant for those climate change deniers who, pursuing a liberal agenda, champion climate change as growth’s antithesis.

In western American states the number of acres devastated by wildfires has increased nine-fold since 1984.14 The destruction of arable land and forests has in turn affected food production, human livelihood and threatened regional biodiversity. The wildfires in Fort McMurray, Canada, earlier this year ravaged 589,552 hectares of land and destroyed 2,400 homes before being brought under control.15 The resulting two-week closure of the Athabasca oil sands operations, which under normal conditions produce around one million barrels of oil daily, led to foregone revenues of an estimated $70 million per day. With a total price tag of 3.58 billion dollars – the Fort McMurray catastrophe is the costliest national disaster in Canadian history.16 Six months on and many of the 88,000 people evacuated from Fort McMurray and neighbouring communities remain scattered in distant cities. 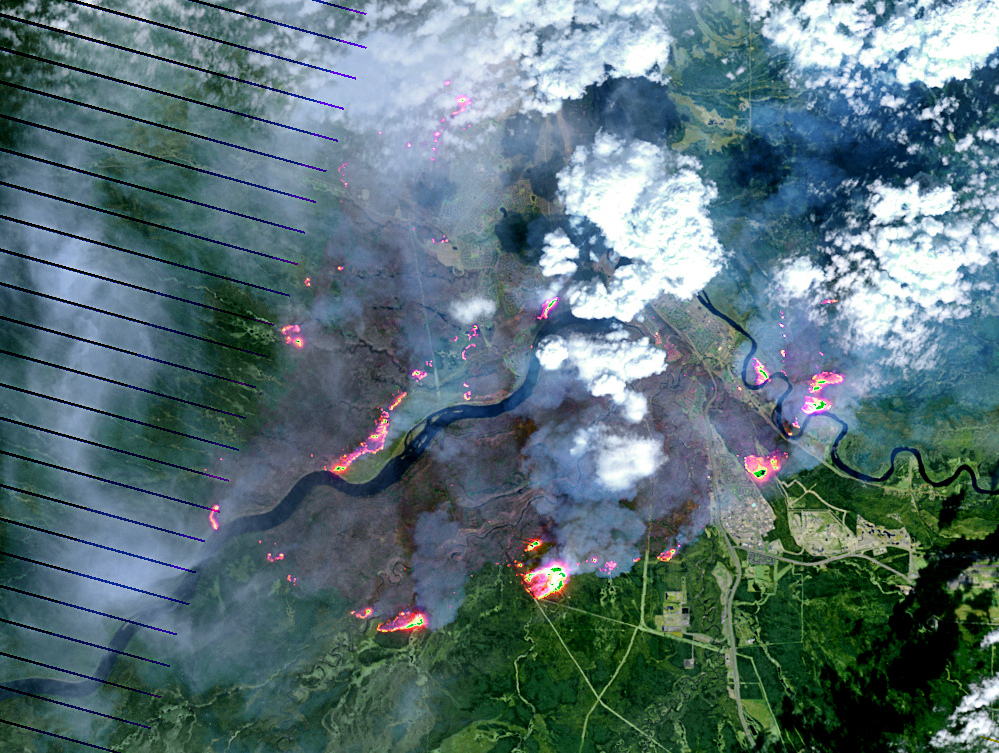 On May 4, 2016, the the Enhanced Thematic Mapper Plus (ETM+) on the Landsat 7 satellite acquired this false-color image of the wildfire that burned through Fort McMurray in Alberta, Canada. The image combines shortwave infrared, near infrared, and green light (bands 5-4-2). Near- and short-wave infrared help penetrate clouds and smoke to reveal the hot spots associated with active fires, which appear red. Smoke appears white and burned areas appear brown. [Credit: NASA Earth Observatory image by Joshua Stevens]

Today, environmental degradation and man-made climate change represent two of the major factors affecting not only our ecosystems, but our systems of politics and finance. They threaten the fabric of our societies by eroding social and community bonds, national symbols and identities. So insidious are these threats that the Centre for Climate and Security categorised climate change as a ‘significant risk’ to {our} security,17 while the 2015 the World Bank report highlighted climate change as the biggest threat to economic recovery. In 2014 a UN press release outlined how, by severely impacting our food and resource security, climate change poses an existential threat to our very human security and development.18

“the Kyoto protocol has been described as an unequivocal failure…”

But in the face of such an obvious existential threat, as well as a growing consensus that climate change and the actions of humans are indeed linked, has any real progress been made in mitigating its consequences?

The first step was taken in 1997. On December 11th the United Nations Framework Convention on Climate Change established The Kyoto Protocol. This document committed its signatories to reduce greenhouse gas emissions on the premise that global warming exists and that human made CO2 was exacerbating the process. In the interest of fairness, it placed a heavier burden on developed nations under the principle of ‘common but differentiated responsibilities’ (UNFCCC).19 Parties agreed that developing countries would require an increase in energy consumption in order to grow, develop and increase the quality of life for their citizens – a strategy juxtaposed to a reduction in industrial greenhouse gas emissions – thus they were all but exempt from emissions targets. In doing this the Kyoto protocol left itself wide open for dispute and ultimately dismissal, not least from the US, a country that in 1990 accounted for 36% of global emissions. And dispute it did. The following year, a heavily watered down treaty, that did not include emissions from international aviation and shipping, was signed by 82 industrialised countries and the then 15 European states. The US, although signatory to the treaty, never had it ratified. In hindsight George Bush was correct in saying that the treaty “would have wrecked the U.S. economy”20 – rather it was by not signing it that the true damage was inflicted. 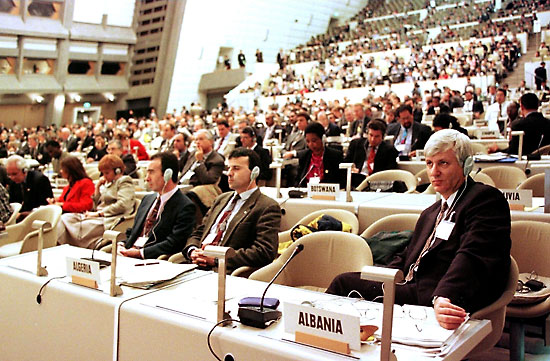 Nearly 20 years on, the Kyoto protocol has been described as an unequivocal failure in achieving its aim.21 It’s mechanism for dealing with Greenhouse Gas emissions (the cap and trade system of carbon credits) both too “modest” and downright “ineffective”,22 evidenced by statistics recently released by NASA that chalk up atmospheric Carbon dioxide levels at 404.07 parts per million – their highest level in 650,000 years. It also reported that nine of the ten warmest years on record have occurred since 2000, that Arctic summer sea ice had shrunk to its lowest extent on record by 2012 and the global average sea level has risen by seven inches over the last 100 years.23

We have not yet come close to experiencing the full effects of Climate Change, which will no doubt have political, financial, social and moral ramifications for the global community. Once again it is the poorest and most vulnerable who will directly suffer. As for the indigenous Alaskan community who opened this story, the cost of their relocation 10 miles inland will amount to 400 million dollars – a bill that remains unclaimed. But progress has been made with the success of the COP 21 Paris in 2015, where a universal legally binding (though unenforceable) agreement to limit global warming below two degrees was signed by 195 countries. This is indeed a milestone in creating an effective strategy and policy for tackling the multifaceted issue of Climate Change and its complexities, but one needs to question whether it is a case of too little, too late. The struggle for survival against a much bigger enemy is very real and we are rapidly running out of time.

Aine Clarke is an MA student of international political economy at Warwick University. Her experience working in the energy efficiency sector sparked her interest in new policies, technologies and general approaches to climate change mitigation.