The Politics Department has been criticised for closing a conference with a torture-supporting Trump-advising colonel.

The Politics and International Studies (PaIS) department has come under criticism for closing a conference earlier this week with a torture-supporting, far-right aide to Donald Trump. 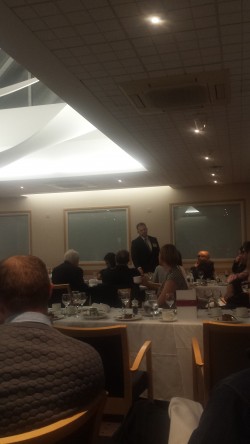 Lt. Col. Shaffer speaking at the Impact Conference 2016 earlier in the week.

On 22 November, the PaIS department held its Impact Conference 2016, a gathering of academics across the country discussing how research can impact the wider world. This year the closing speech of the first day was delivered by retired Lt. Col. Anthony Shaffer, now a media commentator and Trump advisor, who has admitted to involvement in torture of wartime prisoners and supports banning transgender people from the military. This follows his appearance earlier in the term at the Warwick Student Question Time, which was also organised by the PaIS department.

Shaffer, an occasional guest interviewee on Fox News, has regularly shown support for far-right policies. During an interview in December 2014, Shaffer openly advocated so-called Enhanced Interrogation Techniques – commonly referred to as torture. Shaffer responded to comments made by Senator Dianne Feinstein, who argued on the Senate floor that enhanced interrogation techniques were ineffective and unethical. He boasted in the interview that he “did this [enhanced interrogation] for thirty years and, suffice to say, I did it a number of times”. Shaffer claimed that the aim of these techniques is to make the victim “feel uncomfortable”, remarking that “everyone eventually breaks”. Amnesty International has described such techniques as breaches of the right to freedom from torture.

Following his time in the military, Shaffer has become an outspoken proponent of right-wing politics. During a radio appearance in June, Shaffer alleged that between 15 and 17 per cent of “individuals coming through the refugee stream are ISIS”, citing one of his “personal sources”. In July, he spoke out against the Pentagon’s plans to lift the ban on transgender people enlisting in the armed forces, arguing that the military is “not a place for social experimentation”. 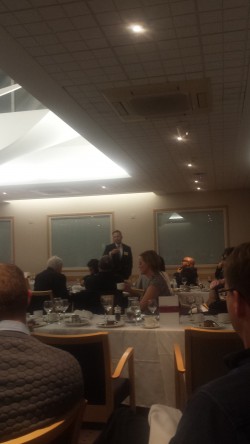 Lt. Col. Shaffer is a torture-advocate and major Trump supporter

More recently, Lt. Col. Shaffer has thrown his weight behind the American President-elect, Donald Trump. Earlier this year, while discussing the results of the EU membership referendum results at Warwick Student Question Time Shaffer stated that the United States is going to “win back our country the same way the UK did”.

The ‘Impact’ Conference was a two-day gathering of academics from across the UK designed to discuss the meaning of academic ‘impact’, a term used to describe the way academic research changes political and social life outside of university. The Warwick Globalist has been handed leaked pictures of the Lt. Col. speaking at the conference.

Audience participants were given no chance to question or challenge Shaffer, who was lauded by PaIS Professor Christopher Moran for having a fine record of “speaking truth to power”. During his speech, Shaffer repeatedly mentioned his proximity to the Trump team. As the Lt. Col. finished, one student attendant intervened, asking whether Shaffer thought it acceptable:

“to work for a neo-fascist administration with a white supremacist in the cabinet, with a leader who thinks it’s okay to ‘grab women by the pussy’, who wants to ban an entire religious group from the country and put them on a registry database?”

Shaffer responded by asking the participant for an academic “citation” for his claims about Trump, before Professor Moran intervened and closed the discussion. The student says several academic attendees privately praised his intervention after the event.

The Warwick Globalist asked the PaIS department whether it thought it appropriate to have a self-confessed torture advocate  and Trump supporter close a conference with no possibility of challenges from the floor. The department’s head, Professor Nick Vaughan-Williams, responded: “Staff and students in the Department of Politics and International Studies value highly the opportunities that the Department can provide them […] Providing, but not endorsing, a diversity of viewpoints, from prominent individuals in the areas that we study and research, gives our staff and students opportunities to question, test, and challenge those viewpoints and greatly enriches our research and teaching provision.”

Despite Professor Vaughan-Williams’ claims, neither staff members nor students were given the opportunity to question, test or challenge Lt. Col. Shaffer’s viewpoints during the event.

The Students’ Union has been approached for comment. The article will be updated when they respond.

Finn Halligan is a third year History student at the University of Warwick, currently on a year abroad.

Read more of our reporting and comment pieces in our World of Warwick section.