From Stonewall to Orlando: Mapping Racial and Trans Exclusion in American Queer Politics

Vardaan Aggarwal takes issue with traditional queer politics in the US, discussing the exclusion of People of Colour and trans individuals from mainstream queer narratives.

A snapshot of the crowd present at Stonewall (Fred W. McDarrah/Getty Images)

The Stonewall Riots were a series of violent protests demonstrations that began in the early hours of June 28, 1969, centered in the Greenwich area of New York City. The Riots involved clashes between police forces conducting a raid at the Stonewall bar and the patrons of the bar, including gay “street kids” of the area, drag queens, and transvestites (transgender men and women in today’s parlance), many of whom were people of color (PoC). 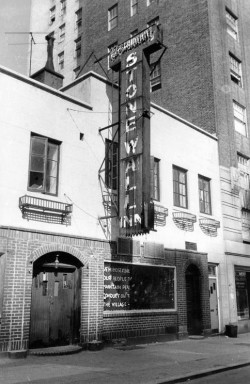 Stonewall Inn, 1969. The sign in the window, posted by homophile activists, reads: “We homosexuals plead with our people to please help maintain peaceful and quiet conduct on the streets of the Village.” By Diana Davies, copyright owned by New York Public Library.

Stonewall is widely considered a focal point in queer history, which produced the modern LGBT movement as we know it. It radically transformed the way queer politics was undertaken, not only in the USA, but the world over, replacing the subdued approach of the erstwhile homophile movement with a singularly more aggressive idea of queer pride. Much of this important work was done by organizations like the Gay Activists Alliance (GAA) and the Gay Liberation Front (GLF), which were set up in the direct aftermath of the Riots.

However once the GLF folded, the GAA set in motion the institutional exclusion of transgender and gender-nonconforming PoC from mainstream queer politics. Some of these individuals, such as Sylvia Rivera and Marsha P. Johnson, were regarded as stalwarts of gay liberation in the politically charged atmosphere of the post-Stonewall era. Johnson spoke of the treatment meted out to her, and those like her, by the GAA1:

Well, I went to GAA one time and everybody turned around and looked. All these people that spoke to me there were people that I had known from when I had worked in the Gay Liberation Front community center, but they weren’t friendly at all. It’s just typical. They’re not used to seeing transvestites in female attire…When they see Sylvia or me come in, they just turn around and they look hard.

Rivera was unequivocal about her outrage at the erasure of drag queens and drag culture from the assimilationist agenda of many new gay rights “leaders”. These leaders sought to make the queer “community” look more attractive to the mainstream political establishment by focusing on conservative issues such as military service and same-sex marriage. Rivera felt such politics of respectability had been made possible only through the radical politics of many long-term gay rights activists, such as herself. Indeed, Rivera worked with gay rights organizations in New York on an anti-discrimination rights bill for LGBT individuals, but when the time to get the bill passed came nearer, provisions dealing with rights for transgender individuals were dropped.2 As gay rights organizations became more popular and accepted, their leadership began to be dominated by “straight appearing” white gay men, who saw excluding trans and gender-nonconforming individuals as expedient.

This conservative shift in queer politics was formalized with the establishment of the Human Rights Campaign (HRC) in the 1980s. The largest gay rights advocacy group in the country, HRC was the driving force behind the historic campaign to legalize same-sex marriage in the United States. But they have been rightly criticized for their explicitly assimilationist agenda that focuses solely on cisgender, white gay men. In a survey conducted in 2015, employees reported that the work environment at HRC was transphobic and that racial diversity existed only in the lower tiers of the organization, with a leadership of cis gay, white men.3 Indeed, same-sex marriage is an issue that directly impacts only the lives of cis, white gay men, while other members of the queer “community”, especially PoC, face far more dangerous and problematic issues. 2015 was one of the most violent years for trans women of color.4

Many HRC leaders have historically led the efforts to exclude trans individuals from gay rights legislations and protections. In 1999, HRC Board Member Dianne Hardy-Garcia successfully cut transpeople out of the James Byrd Hate Crime Bill. Elizabeth Birch, who was the Executive Director at HRC in 1995, claimed transpeople would be included in the seminal Employment and Non Discrimination Act “over her dead body”.5

By failing to address the vast socio-economic challenges unique to queer PoC, such as lack of safe spaces, and by fixating on the idea of “coming out” and eventually getting married, HRC is engendering a restrictive definition of queerness, a queerness which structurally excludes PoC and the gender-nonconforming.

The conservative agenda of the queer establishment has meant the exclusion of PoC and trans and gender-nonconforming individuals from the mainstream queer narrative, with severe white- and cis – washing of even seminal events like Stonewall in modern pop culture.[6][7][8] Such a severe lack of diversity in queer representation is deeply problematic. The media have reported Omar Mateen, the shooter at the Orlando gay nightclub massacre, was a regular at the club and frequently used gay dating apps.9It is thus safe to assume that at least some of the hate that fuelled Mateen was self-hate. In this context, it becomes essential to examine and understand how the queer “community” so totally failed one of its members. Dealing with Mateen’s motivations means confronting the racism and Orientalism within LGBT culture and points at the importance of coming to terms with fetishisation of “coming out”, and recognizing how queer representation is often by and for the few. Most importantly, it means asking how a lack of representation can be so alienating as to call question the very existence of a community. It is, in essence, asking who is and is not allowed to be Queer. 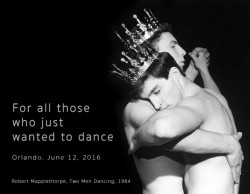 One of the most widely shared images on Facebook in the aftermath of the attacks was that of two white men, locked in an embrace.10 Such blatant whitewashing of an attack whose victims were mainly PoC is a manifestation of the deep fault lines at the core of queer politics. In this context we must ask ourselves: does our grief become valid only if it is expressed through images of white men? For how much longer will the only way to show solidarity be identifying with the West? For how much longer will we be Orlando, Paris, and Hebdo but not Beirut, Juba and Dhaka?

We must envision a new solidarity if we are to take a truly humanist stand – a solidarity rooted in the equal grievability of every life. And a truly queer solidarity is only possible by recognizing that the possibility of tragic death, and a constant struggle for survival, mark the lives of all queer people – regardless of their religion, gender identity, or race.

Vardaan Aggarwal is a second year Economics, Politics and International Studies student. He is the Politics and Economics editor of the Warwick Globalist.