A Culture of Intolerance: How the BJP has sneaked the Hindutva agenda into the Indian social imaginary through #ShutdownJNU

Tenzin Yangki discusses how intolerance has become the ‘new normal’ in the ‘nation’ of India, and how student activists are seeking to fracture this intolerance.

Discourses within the departments of social science in India’s public universities have always attempted to challenge the dominance of American and European schools. Scholars emerging from this movement have endorsed various perspectives – ranging from the subaltern to the post-colonial. These third world perspectives find common ground with other minority narratives: Neo-Gramscian, Marxist, Feminist and Gandhian. Nonetheless, some of these voices appear biased to today’s student. A new revolution is entering the academic imagination. The student has adopted a new identity: the student-activist. This person endorses figures who fundamentally challenged the way Indian society perceives itself. Ambedkar, Periyar, Birsa, and Phule are the new heroes of this generation.

The student-activist talks and writes about issues that make us uncomfortable. They talk of the ‘annihilation of caste’, of rapes, of tribal land rights. They have led the ‘opposition’ voice in not only academia but also New Delhi’s politics. While dissent has been crushed before – Indira Gandhi’s Emergency era of 1975-77 saw hordes of students in jail for ‘thoughtcrime’ – intolerance is no longer confined to attacking students and opposition politicians. A full-fledged attack has been unleashed on all minorities; the smaller the minority, the stronger the attack.

Almost immediately after the BJP (the political wing of the Rashtriya Swayamsevak Sangh, a right-wing Hindutva[1] organisation) government came into power in New Delhi, attacks on minorities gained renewed vigour. Important amongst these is the ghar-wapsi project. The RSS’s’ Home Coming’ programme dictated mass conversions of non-Hindus to Hinduism – and with this emerged gruesome anti-Christian violence. The BJP government in Maharashtra declared a ‘beef-ban’ that led to the lynching of Muslims for the alleged consumption of the sacred cow.

The student-activist picked up on these overt instances of intolerance and challenged the government to deny allegiance to Hindutva. Meanwhile, they continued to question the AFSPA[2] reign of rape and terror in Kashmir Valley and the state-led mercantilist development programmes that incites Naxal violence. They organised an event on Feb. 9, 2016, to debate on the contentious (extra)judicial execution of Afzal Guru and Yakub Memon – a debate that has been held in the mainstream media ever since their hangings. Almost immediately, an entire contingent of self-declared protectors of ‘Bharat Mata’[3] broke into the premises of JNU.

The BJP government is aware of the inconsistencies between the secular idea of India that the Constitution embodies and the Hindu Rashtra (Hindu Nation) that its parent organisation the RSS aspires to. Thus, state-support from New Delhi for the ghar wapsi or ‘beef-ban’ is infeasible. How then can the BJP covertly bridge the gap between its politics and its ideology? By jumping onto the bandwagon that labels as ‘anti-national’ anyone committing thoughtcrime – thinking, talking, and writing about Dalit rights, self-determination, a belligerent army, glaring social and political inequalities, and land usurpation. In the days that followed the Feb. 9 event, we witnessed the death of Indian soldiers at the perilous Siachen glacier, with one of them breathing his last at a hospital in New Delhi. Decidedly vulgar, the Hindutva right-wing voices created a binary: the self-sacrificial solider versus the dangerous, ‘anti-national’ (whatever that means) student-activist enjoying a state-subsidised education. 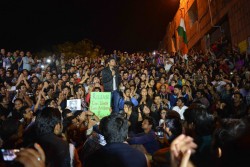 Kanhaiya addressing the crowd at ‘Azaadi Square’ or ‘Freedom Square’ – steps of the Administration Building aka the ‘Pink Palace’ where the admin hides Image: Stand with JNU

Overnight, the student-activist, unrecovered from Rohith Vemula’s suicide,[4] saw his comrades – Anirban, Kanhaiya, and Umar – taken to jail on the charge of sedition (Section 124A, Indian Penal Code): an elevating charge, with Gandhi as a senior in this business of lawlessness. Section 124A is a colonial ‘legacy’ which the British themselves have done away with in 2009 on account of its chilling effect on free-speech and legitimate criticism. India’s judiciary hasn’t struck down Section 124A, but it has managed to take on its widespread use by applying it only to instances that incite imminent violence.

The student-activist’s comrades are out on bail – but they find that the intended damage is done. The ‘nation wants to know’ why they haven’t packed their bags and left for Pakistan already. [5] Extreme voices bay for their blood, threaten their kith and kin, make public threats to lynch them within and outside the JNU campus, and attack them within the precincts of the court. That the attacks were extended to journalists and a Supreme Court panel has somehow escaped widespread condemnation. The media houses that presented doctored videos and incited the public to start the witch-hunting of those it accused of thoughtcrime, continue to spread their hate speech.

As with overnight stories, the issue has been relegated to the background and a modicum of calm has taken over the nation. This calmness is frightening because it announces the dawn of a new normal: where the student-activist is tormented and promptly forgotten, where the fourth estate is a mouthpiece of the government, and where age-old atrocities continue to occur – just brushed further under the rug, further from the drawing rooms and coffee houses of the defenders of the nation.

Tenzin Yangki is studying for a Masters in Politics (With specialisation in International Studies) at JNU since finishing a BSc. (Hons) in PPE at Warwick.

[1] The Hindutva ideology is not synonymous with the Hindu religion. Hindutva is VD Savarkar’s political project which espouses the fascist idea of cultural purity.

[3] A view of the nation a female goddess and mother-figure: both anti-feminist and embedded in Hindu beliefs.