The Sun Never Set: Why Britain Clings on to its Colonial Past

Finn Haligan questions why Britian’s period of colonial involvement in India continues to be remembered nostalgically.

In his famed work, Hind Swaraj, Gandhi described history as “a record of the wars of the world’. Naturally, anyone who was taught history at school would laugh at such a statement. The history of Great Britain, for example, is too rich, varied, and detailed to reduce to a list of wars won and lost, or to a catalogue of princes, powerful and weak. The British people have contributed too generously to the progression of society, to science, to liberty, and to “modernity”, to be demoted to a bunch of sword-bearing charlatans. We, after all, brought the uncivilised into the modern world: where there was darkness, we brought light.

A poor understanding of the past will lead you to this conclusion. All academic research will point out the atrocities of Empire: genocide, enslavement and forced labour were all tools of British domination. It is shocking, therefore, that a YouGov poll found that 44 per cent of the British public are proud of their colonial past. Britons favour the exoticism over the exploitation; the patriotic over the horrific; the jingoistic lie over the brutal truth.

The Indian subcontinent, the jewel of Empire, was one of numerous dominions in which British supremacy manifested inhumanely. The ‘plunder of India’ began under the rule of the East India Company; landing on the east coast of the Indian subcontinent in the early 17th century, a platoon of traders and sailors seeking the wealth of the East quickly grew to become an international military power within a century. What followed was nearly three centuries of military domination and economic exploitation: by importing raw Indian cotton and exporting finished goods, the British were able to maximise profits at the expense of the indigenous population. Meanwhile, domestic trade declined under transit duties, making it impossible for India to enrich itself. This draining of a land rich in natural resources had effects far beyond the economic: increasingly destructive famines occurred throughout the 19th century, a direct result of British demand for cash crops. As late as 1943, Bengal Province suffered a devastating famine prompted by British domination, as the wartime government diverted Bengali rice to British forces. Approximately three million Indian people died as a direct result of the famine. 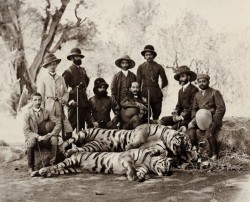 His Highness the Nizam, 1892 Credit: imgur

But the truly upsetting fact is that this information is by no means news. Countless sources of research have concurred that British imperialism damaged India beyond question. Yet it is clear that many British people are unaware or simply choose to ignore this blot in history. ‘Britain is a complicated country’ says Dr. Aditya Sarkar, a leading scholar in Indian history at Warwick. ‘Its growing social tensions and inequality inspires an imagined harmonious past’. In spite of the availability of information, people choose to ignore it in favour of a nostalgic dream. ‘There is no longer a sense of self-questioning, combined with a black-and-white worldview… Or rather a white-and-white worldview’.

The tapestry of history is far too complex to be reduced to clear-cut images of good and evil. One is reminded that by 1940, while fighting the rise of fascism in central Europe, the British still maintained dominion over a vast percentage of the world’s population. In this light, the application of moralistic terminology to the past becomes challenging. Following its victory over the Third Reich, Britain was given the opportunity to forget its violent past as a champion of liberalism; honi soit qui mal y pense became the starting point when considering colonial history.

As such, it is unsurprising that last year the public was gripped by Raj nostalgia during Britain’s India Week. Sue Perkins’ jaunt to Calcutta and Dan Snow’s The Birth of Empire seized the imagination of viewers, seeming more like a pleasant tea-time conversation rather than a genuine academic discussion. World-renowned historian Niall Ferguson somehow continues to propagate the myth of Empire to a wide audience. In British schools, particularly in Key Stage 3, Empire is not widely taught. Instead the favoured focus is on documenting the accomplishments of the British and its Empire while ignoring its consequences.

‘Is it possible to create a free and democratic present without attention to the past?’ asks Dr. Sarkar. ‘What are you proud of? Do you believe colonialists actually went to these places and civilised them?’ A “neo-jingoist” narrative has been spun of exotic adventure, the spread of modernity and the enriching of nations at the expense of the dreadful truth. To accept this narrative is to ignore the problems that colonialism created.