Lyon’s 13th Biennale, La vie moderne, which ran up until this January, could not have come at a more fitting time for France. With the recent terrorist attacks in Paris re-opening the debate around France’s position towards its tainted colonial history, the burgeoning question of national identity has never been more topical.

Featuring works by a 60-strong troupe of artists, the exhibition addressed the intrinsically linked issues of national identity, immigration and postcolonialism in relation to the modern world. As its curator Ralph Rugoff puts it, these are all issues very much encompassed in the present, void of a sell-by date or a screaming news headline:

“La vie moderne is acutely attuned to the ways in which contemporary culture constitutes a working through, and a response to prior events and traditions. Even as artists in the world explore current situations and images, they are also excavating the past.”

Whether it be in France or elsewhere, the constant malleability of our social, cultural and economic landscapes cannot be restrained – despite the best efforts of far right political parties such as France’s Front National and Britain’s own UK Independence Party. 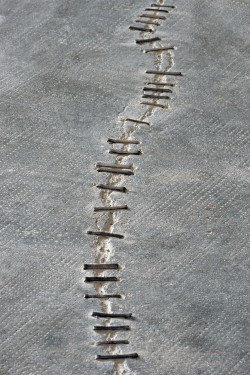 Rather than feed the narrative of refugee-blaming and scapegoating, we ought to address the increasingly prominent issue of the mental illness that comes hand in hand with the lived reality of immigration.

This is exactly what French-Algerian artist Kader Attia intended with his works Reasons Oxymoron and Traditional Repair, Immaterial Injury, created for Le Sucrière, one of the Biennale’s three venues.  Inspired by the race, religion and immigration debates provoked by last January’s Charlie Hebdo attacks, Attia states that young Muslims in Europe often “find grounds for their despair, among other things, in the immaterial injuries caused by their ancestors’ colonisation (dispossession, oppression, and humiliation).”

An uncomfortable topic in France, Attia focuses on the notion of reparation – of France accepting its position towards its previous colonies, specifically Algeria. 2001 saw Jacques Chirac introduce the first national day of homage to harkis, the Algerian veterans who fought against their countrymen to preserve French colonial rule in Algeria. Year after year (obviously always within a presidential campaign), the media has covered first Sarkozy and then Hollande’s “well-intentioned” declaration that France must compensate the harkis for their strife.

Yet these promises of repair are, more often than not, fleeting and unsubstantial, drowned out by racist, Islamophobic and xenophobic cries. France, like many of its Western allies, continuously brushes off the institutional and systematic side-lining of its immigrant communities, even as their denial of economic and social prosperity bred the bitterness that fuelled the riots in Paris in 2005.

Attia’s site specific installation, Traditional Repair, Immaterial Injury aims to counteract France’s blindness to these inequalities. Reconstructing and repairing becomes a tangible act, as cracks in the floor of Le Sucrière are stapled together and restored. Despite being “repaired,” the abrasion nevertheless remains visible. A mesh of staples snakes across the floor of the exhibition venue, which was in previous times a factory, in pursuit of the visitor’s footsteps. Attia thus highlights both the impossibility of concealing the injustices within societies, and the fact that, ultimately, repair does not lead to full recovery, as the cracks inevitably run deeper than the surface. 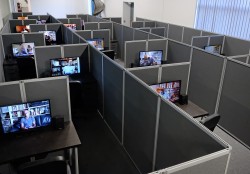 This concrete depiction of repair gives way to a more conceptual and theoretical understanding in the fittingly titled Reasons Oxymoron. The installation, which was also recently on show at the Galerie Nagel Draxler in Berlin, comprises 18 videos featuring interviews with ethno-psychologists on the experience of immigrants adjusting and assimilating to different cultures and environments.

Thematically ordered into categories including “Reason and Politics”, “Genocide” and “Totem and Fetish,” the videos provide an expansive insight into how mental illness is treated by doctors and families alike, and the shifting balance between traditional and modern methods of healing. The comparison of Western psychiatry to the more physical stance that “healers” adopt in non-Western cultures generates debate of what is deemed rational and irrational. Through research and interviews with philosophers, ethnologists, historians, psychiatrists, psychoanalysts, musicologists, patients, healers, fetishists, and griots, Attia creates a multi-faceted conversation on what should be and is currently regarded as a mental illness.

As spectators, we are invited to sit, stand and watch the videos that play before us in what resembles an open plan office, with Attia ironically utilising the very screens that control us in daily life to encourage us to think outside the box.

Rather than the textbook depiction of mental wards and patients that are all too familiar (not that mental illness can ever be textualized), Attia explores the complexities that surround mental illness and the foreigner. Whether it be first, second or third generation, immigration is intrinsically linked with the mental turmoil that comes with leaving a home, a land and a culture with which you have always been accustomed to. The videos bear witness to the onslaughts of depression, schizophrenia and paranoia that refugees face as a result of constant surveillance and daily social injustices inflicted by the lands which promised them prosperity. 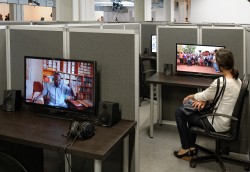 As one ethnologist states, “[a]ll they see is white – and they then recoil within themselves,” demonstrating that the acceptance of the receiving society and the ensuing social integration is vital to ensure the ability to cope sufficiently with new surroundings.

Despite this social commentary, Attia ultimately favours neither Western nor non-Western practices.  The resounding phrase, “Notion de l’etre – on ne pas juste des vehicules,” (“The notion of existence – we are not merely machines”) also questions the pressures within immigrant communities to acquire social and economic status, where the struggle for money prevails over happiness.

Through Reasons Oxymoron, Attia blurs the boundaries between modernity and tradition, showing that mental illness and reason alike cannot be defined. Instead, it is the responsibility of both families and welcoming societies to implicate and involve those mentally ill in society because “only then will they feel at one with themselves and have the purpose to live.”

Rugoff’s take on this year’s Biennale was brave, as was Kader Attia’s inclusion in the exhibition.  In a country where secularism and patriotism continue to dominate political discourse, the subtleties of difference, within race, religion, culture, gender and mental states, are rarely given a voice.

Is it enough to foster a different mindset in France? Probably not. But, as Attia puts it, the question of reparation will always remain “omnipresent.” Whether or not discussed, it’s an unavoidable – perhaps even an irreparable – part of our modern life.

Hélène Selam Kleih is a French and English student at Warwick, currently on her year abroad teaching English in Saint-Étienne. She is the founder of Warwick’s East African Society, and also writes for gal-dem online magazine (gal-dem.com).