Give Nuclear a Chance

Tom Grimes asks people to question current attitudes to nuclear power, and if they should change.

Green energy solutions haven’t exactly been taken up as quickly as we’d hoped. Whilst renewables are the ideal, it will take several decades at best for us to convert. Meanwhile the midway solution of nuclear power is largely neglected.

Well because the reactors are dangerous and kill people, they produce nuclear waste that lasts for millennia and you can convert them into nuclear weapons right? Well, let’s have a look. 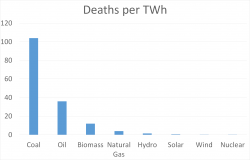 Well when nuclear kills people its dramatic. A meltdown at Chernobyl. Fukushima is hit by a tsunami and earthquake. It makes big news, people get scared and remember it. (As a side note: no one died from radiation during the Fukushima incident).

So how does coal kill so many people? Mining accidents, lung disease and cancer mostly. Nuclear waste seems scary, but there are tiny quantities buried safely in the ground. We pump fossil fuels straight into the air we breathe. That’s why the WHO estimates there are 1 million deaths occur each year due to coal related pollution.

In addition nuclear has been doing all this whilst massively reducing our greenhouse output. 64 Giga tonnes of greenhouse gas emissions have not been pumped out thanks to nuclear energy (The plants themselves only pump out steam) and 1.84 million air-pollution related deaths have been avoided.

Okay, you may be thinking, but there is still nuclear waste that lasts for millennia and it’s easy to convert into nuclear weapons. That’s why scientists are so excited about Thorium.

You see at the moment we’re using very old nuclear technology. Innovation stopped in the 70s and hasn’t really moved on since.

Thorium is six times as abundant as uranium 1 (arguably thorium fuel is 850 times as abundant as all thorium can be used for fuel whereas only 0.7% of uranium can). It’s almost impossible to turn into a nuclear weapons – sadly it’s probably because of this that governments stopped research into it in the 50s. It’s immensely powerful; in terms of energy production 1 tonne of thorium is equivalent to 200 tonnes of uranium or 3.5 million tonnes of coal. Thorium is safer, it doesn’t lead to a chain reaction, making nuclear meltdown accidents very unlikely as it fails safe and the nuclear waste is only dangerous for 300-500 years (compared to uranium’s which lasts for thousands of years).

Yet at the moment there are only a few thorium reactors in operation in the world.

Things are looking up, India is looking to generate 30% of its energy from thorium by 2050 and whilst Thorium requires further research, it’s an opportunity too good to pass up.

Fossil Fuels need to go, maybe we should give nuclear a chance.

Thomas Grimes is a fourth year Philosophy and Literature with Intercalated Year student having studied in Copenhagen. He is involved with Effective Altruism society which is part of a social movement that uses evidence and research in order to do the most good.