Why Were There Armed Police On Campus Today?

Why were armed police on the University of Warwick’s campus this afternoon?

Just after midday today a unit of West Midlands Police armed with fully automatic assault rifles arrived on Library Road on campus. Marked and unmarked cars hovered outside the Ramphal building for at least an hour as John Pittman, Deputy Head of Security, and a couple of others from Warwick Security stood around L3 in the Science Concourse, according to eye witnesses. 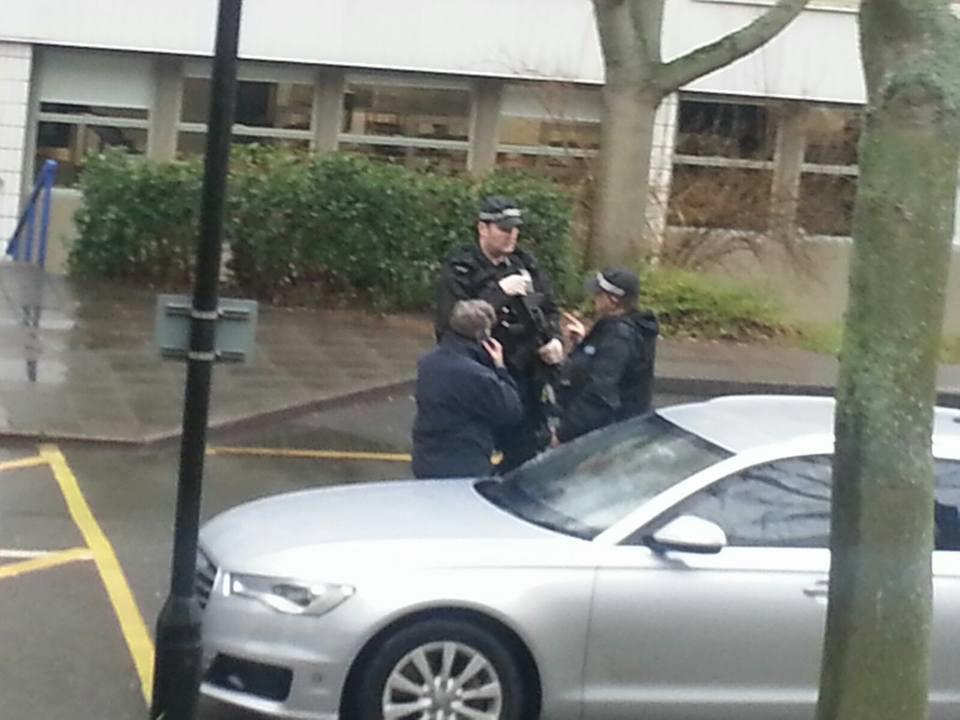 The armed police apparently first entered the Engineering Building, and reports filtered through first that they were looking for a professor, and then that they were there due to a massacre threat.

By 1PM it appears that the openly armed police had left, but several other police officers remained on campus around the Gatehouse and Health Centre until at least 2:15PM.

The student mentioned in the post studies at Warwick.

At around 2AM that night, someone created an anonymous Twitter account and Tweeted the post to the the University of Warwick’s official account. By 10AM this morning, Warwick University had replied requesting more details. The anonymous alarm-raiser, @concernedcber, directly messaged more information to Warwick at around midday, but added that it was likely not a serious threat.

Officers − some of them armed − were deployed to the campus today (17 February) as a precaution and for reassurance. No arrests have been made in relation to the threat and enquiries into the hoax message are currently on-going.

Armed police officers from West Midlands Police attended campus today in order to enquire if an individual was present who they wished to speak to … The police left the campus after making contact with the individual who was in fact not on campus but actually in a totally different region of the UK. We are informed that on speaking to the individual concerned that the police were satisfied that the individual had absolutely no knowledge of the matter they were looking into and that that line of enquiry has now closed.

Last night the same user who posted the seeming hoax also posted a picture of the Boar, Warwick’s student paper, shortly before posting the massacre threat.

If this is the individual West Midlands Police were looking for, it seems likely they would have been on campus at some point in the recent past, in order for them to have had a copy of the Boar. In which case, it appears confusing that, the individual “was in fact not on campus but actually in a totally different region of the UK.” Were West Midlands Police looking for the individual who posted the hoax, or the student mentioned? Did they speak to the student and then find that he had nothing to do with the post?

More importantly, was the decision to call the police justified? There hasn’t been a campus “massacre” in the UK, as far as we’re aware, in recent memory. The presence of armed police on campus may in fact increase risk of an incident, rather than provide “reassurance”. If this is now the standard operating procedure, are we set to see a new militarization of campus life and normalization of previously-considered drastic measures?

Other campuses around the world have implemented strict ‘Cops off Campus’ rules, investing one directly elected figure with the discretion to decide whether police can be allowed on campus or not. Some campuses in Greece, the Philippines, and Turkey have versions of that rule. At Warwick, the procedure and authority to call the police is entirely unclear, as we learnt so brutally on Dec. 3, 2014. Perhaps it is time to have a serious, democratic discussion over the presence of police on campus and procedures for calling them.

If you have any more information on this story, please contact me at editor@warwickglobalist.com.

Connor Woodman is the Warwick Globalist’s Editor-in-Chief. He can be contacted @ConnorDWoodman.