The Legacy of 1965: The Act of Killing and Legal Theory

Writing from Monash University in Australia, Anthony Taylor examines the Indonesian ‘dual state’ – a state blurred between the lines of legality and criminality – through the cinematic depiction of the 1965 massacres in the Oscar-nominated documentary Act of Killing.

Figure 1: Portrait of then-President Sukarno (left) and General Suharto, who would overthrow the President in a bloody 1965 coup. Image: Billy Simpson

This year saw the 50th anniversary of the event which triggered one of the bloodiest episodes of the 20th century. In 1965-1966, hundreds of thousands of members of the Indonesian Communist Party (PKI), and those accused of association with it, were murdered by the Indonesian army and the civilian militias goaded to assist in the massacre. Triggered by the assassination of six generals on Sept. 30, 1965, in what was claimed to be an attempted coup by the Communist Party, Suharto and the army exploited this as a pretext to seize state power (the counter coup) and carry out the mass killings of leftists.1

Joshua Oppenheimer’s incredible documentary, The Act of Killing, deals with the legacy of the 1965-6 slaughters.2 The documentary reveals the continuing reverberations of Suharto’s rule and exposes the army’s decision to construct the PKI as an enemy of the state for Indonesia’s present-day legal-political system. One paradigm through which those events can be considered is legal theory.

According to jurist Carl Schmitt, a powerful conservative critic of liberalism and infamous supporter of Nazism, a coherent legal order requires a foundational political decision, formed by the state. What is the political decision? The political decision is one that distinguishes friend from enemy. The enemy is a group that poses an existential threat.

Take, for example, the Weimar Republic during Schmitt’s time. It was a German liberal democratic state, beset by political polarisation. The government continually used emergency decrees to try and maintain stability, but, for Schmitt, its liberal tolerance would be the undoing of its own liberal legal order. According to Schmitt, the state should have declared the enemy once and for all (for him, the communists) and got rid of them. This would have protected the liberal legal order.

Schmitt’s thought can be applied to 1960’s Indonesia, which was in a comparable situation of political polarisation, economic turmoil and practical non-applicability of the law. In the late 1950’s, President Sukarno (not to be confused with the later-dictator Suharto) closed parliament and introduced ‘Guided Democracy’ in an attempt to reduce political polarisation and separatist tensions within the nation. This gamble failed, and Sukarno became increasingly wedged between the Army on the one hand, and the PKI on the other. As such, we could interpret the actions of the Army in 1965-1966 through a Schmittian lens. They made a political decision in an attempt to restore order and legality to Indonesia; indeed, the post-1965 regime was known as the ‘New Order’.

In The Act of Killing, many perpetrators of the killings present such a narrative to account for their actions, pointing to political instability and the need to crush the agents of that instability – the communists – and bring about the ‘New Order’.

Such justifications for murder can be critiqued – Italian philosopher Giorgio Agamben’s writings provide such an avenue. Firstly, in the Schmittian account, the political decision is followed neatly by a new order. However, Agamben has pointed out that the period of ‘exception’, what we can loosely think of here as the time when law was suspended and the public enemy declared, effectively seeps into the legal order that follows it. In concrete terms, this means that – contrary to Schmitt – the state forms alliance an with gangsters who work outside the law, in order to enforce the exclusion of the old enemy group (communists), and the concentration of power in the executive – which is rhetorically justified as ‘exceptional’. This becomes part of the new, stable legal order.

A second Agamben-derived critique attacks Schmitt’s representation of this ‘political decision’ as something objective, based on threat to the life of the group. “He who invokes humanity wants to cheat” was a dictum of Schmitt – and such a dictum can be turned against Schmitt himself. The PKI was a civilian, legal party in 1965. Yet, it was declared a threat to the Indonesian nation, justifying hundreds of thousands of deaths. The objective nature of the political decision is highly questionable; an existential threat can be subjective and easily constructed. Schmitt also assumes that it is the state that will make this objective political decision. But we can also question whether the state is a unified, rational institution capable of such a decision, and whether it is not only the state, but other groups – including non-state militias – that make or contribute to ‘political decisions’.

The Insights of The Act of Killing

The Act of Killing consists of a film, and a film within a film. The film within the film is made by some low-level preman (gangsters) who were members of a paramilitary organisation that carried out hundreds of killings in North Sumatra. The main perpetrator is Anwar Congo. The preman re-enact killings, torture, and destruction of property, alongside their aesthetic representations of bad dreams and justifications for these killings.

The film proper shows their reactions to their own re-enactments, and their continued involvement in extortion, money politics and more in contemporary Indonesian society. It also features interviews with prominent Indonesians: politicians, newspaper editors, paramilitary leaders. Two examples from the film neatly demonstrate the legal theory critique I have sketched above. 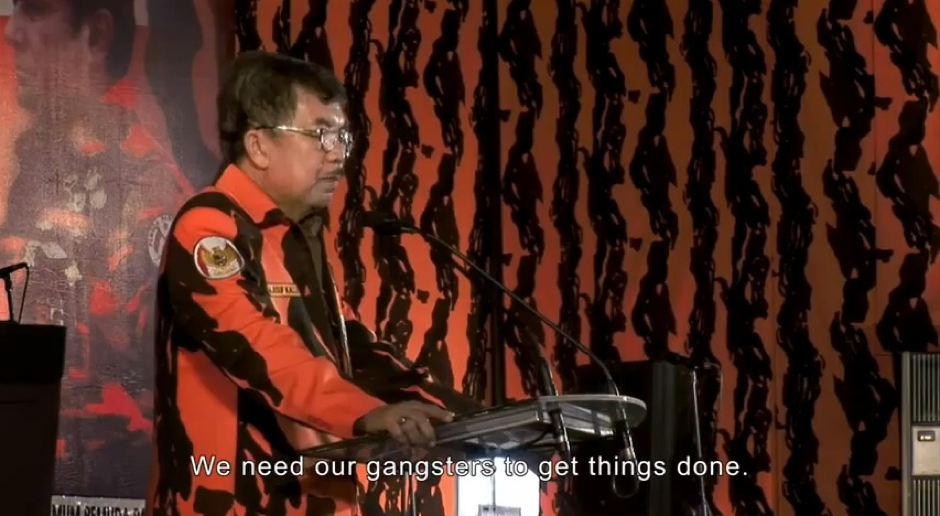 Jusuf Kalla, Vice-President of Indonesia (then, and now again), declares to a paramilitary audience: “we need preman”.3 The period when the army and paramilitaries worked together to destroy the PKI was not just a foundational period of a stable legal order. Rather, those interactions between state and extra-state paramilitaries continue today as part of the ‘normal’ legal-political order. There is no neat line between a decision to identify ‘the enemy’, and a new more stable and rational legal order. This fact, as Kalla’s statement attests, is public knowledge and part of the public legal-political sphere in Indonesia.

“They had to be killed”

Figure 3: Anwar Congo, a member of a militia involved in the killings of leftists, reflects at a courtyard where he enacted the murder in 1965-6.

The second critique from Agamben was that political decision is ultimately subjective; one can construct necessity. The critique also, therefore, questioned why it was that the state (representing objectivity of decision) would necessarily make the decision. In the Indonesian context, we need to consider carefully the relationship between State and preman, national and local, in why the decision was made.

The bad dreams and physical reactions of Anwar Congo in relation to his acts of killing illustrate these two points. Anwar tells himself “they had to be killed” throughout the documentary. Near the end of the documentary, when returning to a site of killings, he repeats this claim, but begins to violently gag. For a moment we are privy to his internal dissatisfaction with the Schmittian narrative that the PKI represented an objectively-determined existential threat to the nation. For a moment, the alternative moral and descriptive narrative within him is revealed.

As these examples attest, The Act of Killing is a brilliant introductory source for understanding the legacy of the 1965-6 mass killings and their central importance to contemporary Indonesian law and society, whilst indicating some of the first stirrings of a modern-day national confrontation with those events.

Anthony Taylor is an honours student at Monash University, Australia examining Indonesian history through the lenses of literature and legal theory. His research paper was entitled: ‘Reading the Indonesian Dual State through the Cinematic Depiction of Extra-legal Killings’. He is also a coordinator of Grotty, a left-wing newsletter at Clayton Campus, Monash University.