When Taylor Swift released the single ‘Shake It Off’ in the summer of 2014, it was an immediate hit. Gaining an audience of nine million the day after it first played on US radio stations, the catchy pop anthem – with its upbeat tempo, repetitive melodic phrasing and incessant positivity – debuted right at the top of the US Billboard Hot 100, and was to achieve greater first-week sales than any other single of 2014. This unprecedented popularity is no doubt partially due to the charm of the music video, in which Taylor maximizes her goof-appeal by attempting to keep up with professional dancers in an ever-changing parade of different dance genres. However, that fact that ‘Shake It Off’ is now the sixth most viewed video on YouTube is also due to some very clever capitalization on postmodern culture: specifically, on the phenomenon of identity fluidity.

A defining aspect of modern culture is that we understand our identities as malleable and contextual. The average British 14-year-old may be a sulky skater kid, an assassin in a virtual battle arena, and an affectionate, good-natured grandchild all in the space of a day. By playing around with different popular stereotypes – the ballerina, the break-dancer and the cheerleader, to name only a few – Taylor appeals to the idea that the millennial can have more than one identity at once, and can reinvent herself at a moment’s notice. Although she does not portray herself with multiple identities in reality – on the contrary, Taylor has successfully carved out a very recognisable identity for herself within the music industry – her adoption of multiple identities as a marketing tool for her ‘brand’ is effective precisely because it appeals to the notion that we have the potential to be anything.

‘Shake It Off’ is not an isolated case. Identity fluidity is prevalent not only in Taylor’s work but in aesthetic representations of most global superstars today – just think of Beyoncé, who is both Mrs Carter and Sasha Fierce, or the many weird and wonderful performance identities of Lady Gaga. In his 1996 article, ‘Capitalism and Schizophrenia: Contemporary Visual Culture and the Acceleration of Identity Formation/Dissolution’, Jonah Peretti – who a decade later founded the American internet news media company Buzzfeed – explored this phenomenon by arguing that identity formation is influenced by how we see ourselves (or versions of ourselves) reflected in visual popular culture. Drawing on the work of the French psychoanalyst Jacques Lacan, Peretti explains that infants go through a mirror stage – a stage during which a child, before she has developed a unified ego, starts to become aware of her own reflection and identifies it as being of herself. From this point onwards, the infant strives to become her ‘Ideal–I’, of which her reflection, and her perceived reflection in others, is a representation. If we run with a Lacanian analysis of identity formation, this process may happen when a teenager watches a music video: the video may lead her – for a short time at least – to identify with a particular aesthetic persona, and thus to reinvent herself in his or her image. 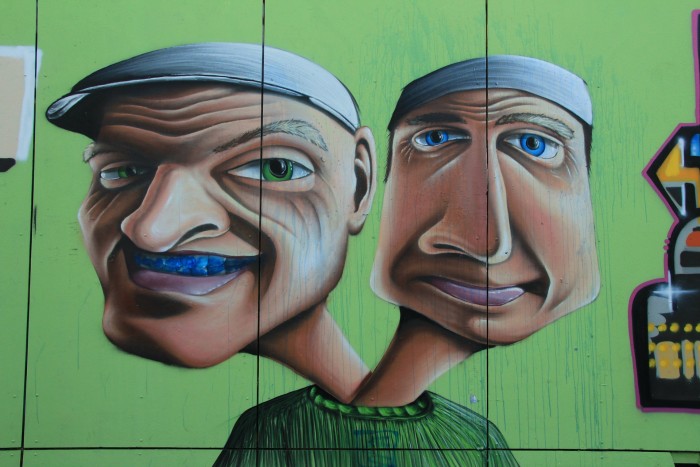 The prevalence of identity fluidity in youth culture is not only due to the sheer number of aesthetic personae we see in the media every day, but also to the extraordinary speed at which these different visual identities come and go – what Peretti calls “the acceleration of the temporal rhythm of late capitalist visual culture”. He observes the rate at which detached, unconnected material signifiers are projected through our screens by, for example, MTV style media, and how this “rapid fire succession of signifiers” encourages us to adopt and shed identities equally quickly. In other words, the lack of visual temporal continuity on our screens is mirrored by the reduced sense of narrative continuity we perceive in our own lives. For Peretti, the internet plays a major role in identity formation in late capitalism. Not only is the internet the ideal platform for the creation of multiple identities, as it allows us to adopt online personae which may bear little relation to our ‘real’ selves, but it also offers us “more flexible, rapid, and profitable mechanisms of identity formation” through the phenomenon of online shopping.

This is where things get a little sinister. Today, within moments of the sparking of a desire to adopt a particular identity, I can load a website on my phone and have a clothing item or other material signifier of that specific identity on its way to me within seconds. Moreover, perhaps the most insidious fact about all this is that the rate with which the millennial adopts and sheds identities allows advertisers to exploit the multiple markets within a single individual. No longer does Adidas only have appeal for those who primarily identify as sporty: Adidas can now exploit the whim of every individual who – even for only an hour or so – fancies themselves as athletic, and consequently orders that pair of expensive running shoes which they consider so vital to this future-conception of themselves. Therefore, Peretti shows how the perfect conditions are in place for capitalism to thrive, as the acceleration of visual culture promotes hyper-consumption.

Almost two decades on, this analysis of postmodern culture has been fully realised. Developments in communications – specifically the rise of social media – have not only opened up new platforms of expression through which individuals can create and recreate their identities, but has also created new opportunities for advertisers to market their products to consumers. Importantly, advertisers can now target individual consumers at specific times, encouraging even more rapidly the adoption and discarding of different identities. My Facebook page is jam-packed with adverts for products related to my Google history, making it ever easier for me to give in to my transient identity-formation temptations, as is evidenced, ironically, by the advert for a pair of Adidas trainers that appeared in my sidebar when I refreshed my newsfeed thirty seconds ago.

Whilst there are obvious ethical problems with identity fluidity in general – namely, whether the appropriation of minority cultures by dominant ones is ever ethically justifiable – when all of this is set within a hyper-capitalist framework these problems are intensified. When a minority culture is exploited by a dominant culture for financial gain, as with the Urban Outfitters Navajo controversy in 2012, the sale of the product in question creates profits for the dominant culture whilst the minority culture receives nothing. Similar exploitation is evident in the video for ‘Shake It Off’, as Taylor’s twerking ultimately contributed to profits made by the song – not to mention the criticism she received on the grounds of reinforcing black stereotypes and fetishizing a minority dance form. As cultural borrowing does not happen on a level playing field – because a dominant culture has infinitely more means with which to appropriate and exploit others – identity fluidity in late capitalist society often works to reproduce both social and economic inequalities.

Although it may appear that we live at a time in which identity is a free-for-all, it is only free for those who can afford it. Whilst identity fluidity is often a positive – and not to mention inevitable – part of our contemporary culture, the Hydra has never been an unambiguously benign creature, and we ought to pause for thought the next time the longing to be Taylor Swift rears one of its multiple heads.