Isaac Little explores the impact of the Drug War on Mexican society through some of Mexico’s most popular, and controversial, music. 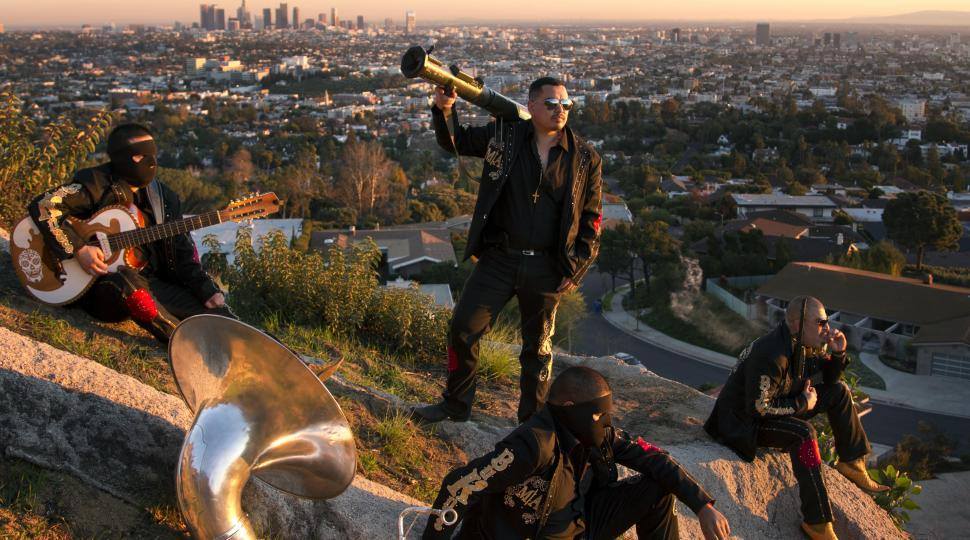 With an AK47 and a bazooka behind my head,

Cross my path and I’ll chop your head off,

I’m crazy and I like to kill my enemies,

So starts ‘Sanguinarios del M1’, an incredibly popular song by a group called Movimiento Alterado. It’s about cartel leader Miguel Felix Gallardo, portrayed by Diego Luna in Narco’s Mexico, and carries on with lyrics like ‘To kidnap and murder, I’m the best’. It’s a particularly famous example of a type of music called ‘Narcocorridos’ or ‘Drug Ballards’ that have taken Mexico by storm.

The music has been around since at least the 1930s but has steadily risen in popularity since the beginning of the Mexican Drug War in 2006. President Felipe Calderon’s decision to deploy the Army against drug cartels turned a relatively low-level conflict into a full-scale war that’s seen 150,000 deaths in thirteen years according to a congressional investigation.

With the conflict centred in the north and west of the country, particularly in the states of Sinaloa, Chichuana and Guerrero, those living in affected regions have spent the last decade in civil war like conditions. The strategy of targeted arrests and assassinations of cartel leaders has splintered the old networks into smaller rival groups that spend years fighting each other, as well as the state, over former territory.

Songs that apparently celebrate the violence of the war are unsurprisingly, incredibly, controversial. The states of Sinaloa, Chichuana and Coahuila have banned Narcocorridos. The music has been accused of promoting the lifestyle of criminals and even of being an avenue for cartels to launder their money. But bans have been largely unsuccessful because the music is still accessible online. The growing popularity of the songs in the US mean those with radios can just tune into stations based across the border. The bans have also been criticised for playing into the anti-government image of Narcocorridos, unintentionally making them even more popular than before.

Many young people in Mexico can hardly remember life without the Drug War. Like Gangasta Rap, Drill and other genres historically caught up in similar controversies Narcocorridos defend their violent lyrics as portrayals of the reality in which it’s fans and artists have been forced to live by the actions of those in power.

Narcocorridos are just one of many ways the Drug War has transformed Mexican culture. Narco-cinema, with films like Miss Bala and Heli, has emerged as a popular sub-genre of the Mexican film industry but have also found their brutality condemned as ‘Mexploitation’. Narco themed clubs and bars have popped up in most major cities while a new type of literature called the Narco-Western, kicked off by Hilario Pena’s Chinola Kid, claims to be the modern successor to the westerns of the mid-20th century. There’s even a subculture revolving around dressing like a Narco which see’s city kids accused of being ‘Narco-Posers’ for wearing the northern rural norteño (think cowboy) style of clothing.

Perhaps even stranger to us is the idea of ‘Narco-Religion’. Mexico is a deeply catholic country where rural religious life revolves around praying to Saints. The cartels have their own Saints. In particular they patronise St. Jude Thaddaeus, the patron of lost causes and desperate situations, donating large sums of money to his churches and altering his statues to include stolen items and other symbols of Narco Life. The other hugely popular ‘Narco-Saint’ is Santa Muerte or Saint Death, a folk saint condemned by the official Catholic Church but whose worshipers’ number between 15 and 20 million across the Americas. Cartel members are known to raise statues of Santa Muerte in areas they control.

Together all these sub-cultures form Narco-Culture. A concept both hated and celebrated in Mexico, which probably tells us something about the country’s relationship with the cartels themselves.

The positive portrayal of cartels is partially the result of widespread distrust of the government. Many Mexicans blame the state for the violence of the Drug War and see the ‘Narco Life’ as the only escape from brutal poverty. A strong theme in Narcocorridos is that of ‘levelling’. In a society riven by entrenched inequality, where many of the rural poor feel abandoned and stigmatised, the myth of the narco is a powerful one: that anyone, regardless of birth, can make themselves powerful and wealthy by picking up a gun and running drugs.

The concept of Social Banditry can help explain the apparent reveration of cartel members in Narcocorridos. The Historian E.P Thomson argued that throughout history marginalised groups have romanticised outlaws who the “state regard as criminals, but who remain within [the marginal groups] society”. The figure of Robin Hood is perfect to illustrate this idea in the English sense. Criminality is celebrated and lionised because it’s seen as a form of social protest. The bandit takes from the rich oppressor and gives back to the poor. The fact that cartels brutalise normal Mexicans is less important to those listening to Narcocorridos than the mythologised rebellion that they supposedly symbolise.

Social Bandits also often become nationalist symbols and that is perfectly illustrated through Narcocorridos. Cartels are celebrated for their anti-Americanism. The government is portrayed as being in the American’s pocket and the authentic Mexico is being defended by the cartels. The Narco’s ‘steal from the rich’ by selling drugs to the Americans while ‘giving to the poor’ through patron networks and giving poor Mexicans a way out of poverty. Sanguinarios del M1 explicitly says “They bring to mind several revolutionaries, Like Pancho Villa fighting guerrilla” making a direct comparison between Mexico’s anti-American national hero and Miguel Felix Gallardo’s cartel.

Narcocorrido’s show how music can trace the fault lines of a society. December 13th was the 13th anniversary of the Mexican Drug War. The popularity of music celebrating Narco life shows that even after all this time the cartels have a significant degree of popular support. It has been a year and a half since the election of President Andrés Manuel López Obrador who promised reconciliation and an end to the Drug War. Yet his softer policy has come under extreme pressure after cartels were able to force the release of Ovidio Guzmán by briefly seizing control of the city of Culiacán in October. For average Mexican’s the Drug War burns on, and the war’s music draws an odd battle line.

Isaac Little is co-Editor of the Warwick Globalist’s Arts & Culture section and a third-year History student.