Syeda Iqraa Bukhari explores the racial hierarchy of colonialism’s past, its impact on racial identity in the present and how to move forward in the future. 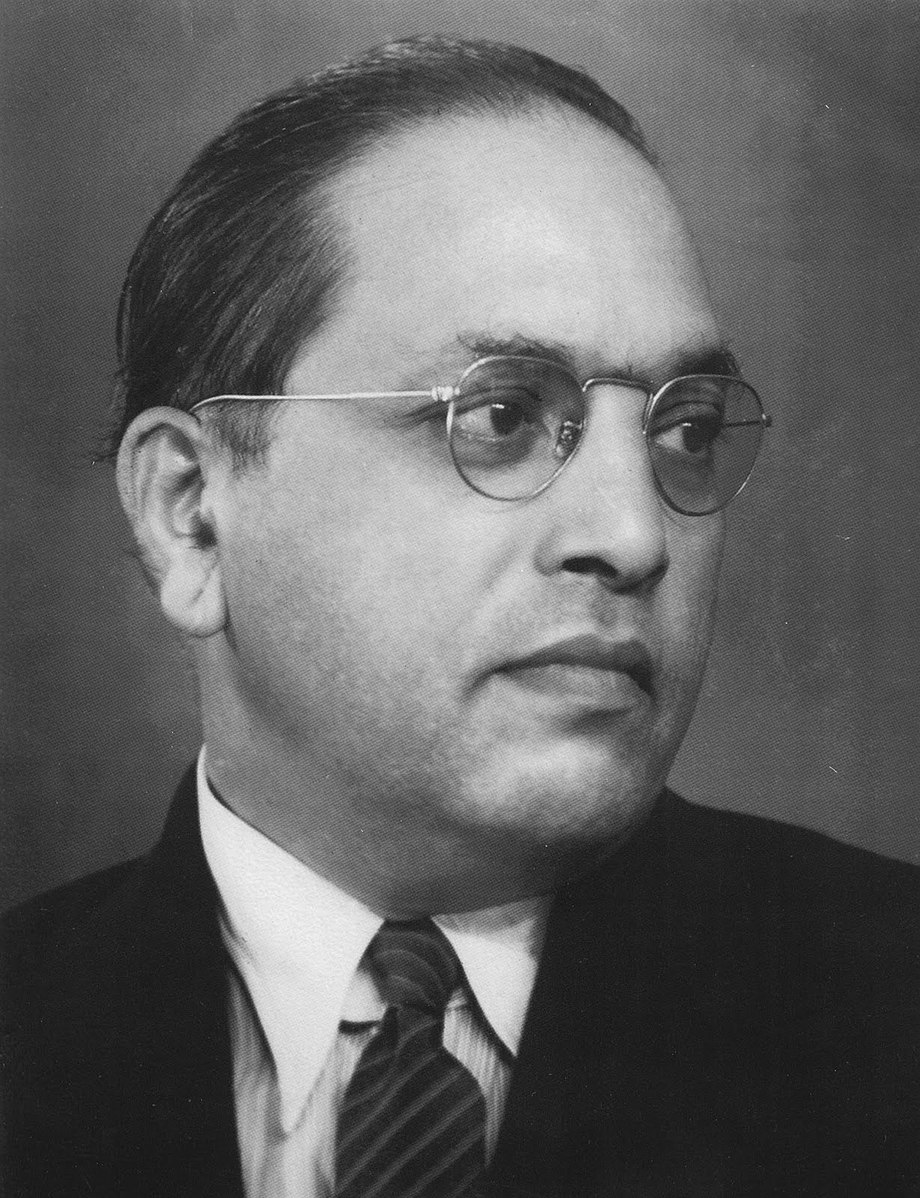 It means for the brown race to live life like Janus, with one half challenging the superiority of the powerful white race while clandestinely envying it, with the other half sympathising with the black race while doing everything in one’s power to not become it.

The consequence is a congested, sandwiched racial status that questions an enslaved, colonized past and yet manages to mirror itself as a rank above the (relatively) darker skin tone. Thus, the unintended quest for identity is not always against those who have feloniously controlled one’s past but possibly against those whom one (feels) should never be equated with oneself in the past, present or future, simply because one thinks one is better. In other words, for a brown individual hailing from a post-colonial background, slavery has a hierarchy of its own. A social ladder where in between the white and black races is fixated the brown race. 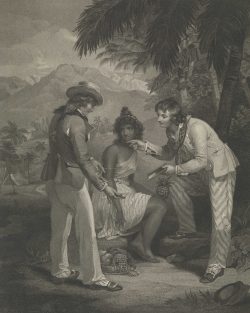 The brown and black races that view themselves as subordinates in this social ladder resent the power of the white race while consciously and subconsciously imitating the seemingly superior lifestyle of the white race and their more aristocratic etiquettes of dressing, of speaking, of governing, of behaving and of being. Meanwhile, they do not place each other on that pedestal comprising of both prestige and antagonism as they do with the white race. The brown race might see the black race’s struggle against racial chauvinism as valid and requisite but it does not see as its own. What it does see as its own is the labour to move on from an enduring memory of defeat. Nothing explains it better than an aphorism quoted in Daniyal Mueenuddin’s book In Other Rooms, Other Wonders: Three things for which we kill: Land, women and gold.

Although this saying sounds like an ancient war cry from a primitive tribal collective, it manifests the way victory over ‘the other’ is seen even today. A modern, liberal brown woman might be allowed to marry a white man after getting him to convert to Islam or Hinduism etc but is less likely to be given permission to espouse an already practicing man who adheres to an identical theology (as hers), the reason being his African American heritage. Similarly, she might associate crime and crude mannerisms with black men, engaging with premeditated, age old stereotypes, rather than catechizing them.

In contemporary South Asia, numerous brown women who lack in self esteem fall prey to societal expectations for the sake of receiving marriage proposals on the superficial and objectifying basis of how they look. They find themselves colouring their hair golden and applying toxic creams and products, some of which even contain mercury, to lighten their dusky complexions; the brown woman’s burden. Of course there are exceptions that vary from these examples but the big picture about racial identity politics is what matters here.

A brown man may audaciously dream of inhabiting or acquiring a white man’s land, triumphantly courting a white woman and earning in the white man’s currency but will never seek to do the same with a black man’s equivalent(s). The brown individual is not good enough to be white but is too good to be black; one is a living, breathing battle between defeat and vainglory. The white colonizer looks down upon and pities the brown community that further alienates the black population; all the while the ruler gets more people to look down upon.

Divisions within divisions define the manner in which a modern man or woman living in a post-colonial South Asian polity may see themselves and their place in the world. However, this unhinged and immoral sense of selfhood is not a modern phenomenon, so to speak. It goes back to the British Raj. 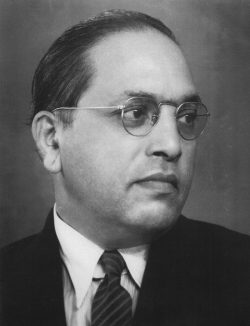 In Frantz Fanon’s raging arguments about the garrisoned and conquered black race standing up for itself in the face of its ruling white despots, where does the brown ethnicity stand? A bridge, a barrier or perhaps in Mahatma Gandhi’s case, an apparatus for executing injustice towards the tyrannized class, on behalf of the ruling elite and the law, since he happened to be a lawyer and a bashful one at that.

Gandhi referred to untouchability as a vile “serpent” in Indian society but as Arundhati Roy explains, he was always in favour of a revitalised and prevailing system of caste. In an India where Gandhi felt it was irrational to perform ritualistic cleansing after even touching a lower caste Hindu, he postulated that caste should be ameliorated but never abrogated. He stated in regards to the social stratum consisting of Varnas that it “has its limitations and its defects, but there is nothing sinful about it, as there is about untouchability”. It was the Banya-born Father of India’s adversary, the Dalit-born Father of the Indian Constitution, B. R. Ambedkar, who wanted to “annihilate” and shatter caste completely.

Amongst the many instances of discrimination and cruelty glaring at Indian society but having become inconspicuous, and accepted, in the name of religion is an account of some systemized precedents described by Ambedkar as follows:

This is the kind of environment Gandhi came from. Having a timid side to himself that came in the way of his confidence, ambitions and legal career and having had suffered vanquishments, Gandhi retreated to South Africa in 1983, which is where he famously, rather infamously, “became the Mahatma”.

This metamorphism of becoming came with quite an interesting journey that initiated with Gandhi’s frustration and humiliation at Banias (the high purveyor caste Gandhi was a kin of) being paired with black Africans on a rail ride from Durban to Pretoria. One version of history emboldens his moment of awakening for being rebelliously dismissed from the train for refusing to be downgraded to a lower-class cabin from the first class, whites-only compartment. Another version of antiquity reveals the great horror that Gandhi felt for having been bracketed with the lower class, compromising of black Africans, whom he described with such insulting terms that I do not even want to mention here; last resort terms employed by brown people today to libel other brown people during times of severe deficiency in ethinc, religious, sexist, ageist, political, personal and classist insults. 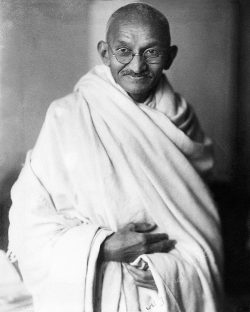 Gandhi also battled for whites and blacks and later Indians to have segregated entrances at the Durban postal office so that upper caste Indians would not have to waltz into a mailing centre from the same door as blacks, in a place that ironically belonged to black Africans. Gandhi sustained, in what seems to be his validation for foreign occupants, whose dominance he antithetically condemned in his motherland, that, “We are fellow members of the Empire. You should not be discriminating against us. We are not like these black people. We are better than they are. We are different from them. And you should not treat us like them.”

It comes as a surprise for a man who starved himself to make an anti-colonial statement and premiered a mass non-violent resistance movement to rid India of the British colonists, to have represented and endorsed the very same respublica in South Africa. As a response, Arundhati Roy propels for a moment of reckoning and implores, “… what does it mean for a person who is so powerful to say I’m living like a poor man. Because poverty is not only about the lack of money; it’s also about the lack of power. If you have a choice … then it’s a form of theatre.”

These actions and beliefs that Gandhi embodied and got away with serve as a metaphor for how post-colonial people view themselves today, Hindus and Muslims alike. The fashion in which his schism with lower class Hindus and black Africans emerged as racism seems to have become a pattern repeating itself many years after his death. Modern scholars talk about ‘otherization’ as counterproductive means of relating to one’s own identity or filling the void of not having one. In the case of the brown community, the otherness is two folds. In nature and in history, it is racist. It is regressive and frankly speaking, virtuously repellent.

While the brown community can often be seen spreading awareness about autochthonous bigotry that South Asians had to face for 200 years credited to direct or indirect British imperialism, it is likely that during the same 200 years, South Asians were learning to detach from another persecuted community, one just like them in many ways – whether they like it or not.

Interestingly, civil rights spearheads like Khan Abdul Ghaffar Khan, George Bernard Shaw, Martin Luther King Jr. and Nelson Mandela exhibited great respect for Gandhi. Mandela, applauding the much more massive good that Gandhi contributed to the world than the not-so-good, acknowledged Gandhi’s intolerance towards the black African race and urged for his exoneration citing that, “Gandhi must be forgiven those prejudices and judged in the context of the time and circumstances. We are looking here at the young Gandhi, still to become Mahatma, when he was without any human prejudice save that in favour of truth and justice.” 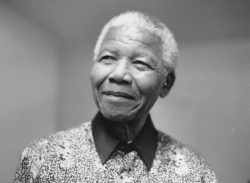 Even so, Gandhi was not a naive or oblivious young teenager when he moved to South Africa. A trail blazer in the making, he was well aware of himself and the growing magnitude of his influence in society. He was old and mature enough to deliver public speeches on the most significant political issues, to be the architect of a weekly newspaper, to be employed as an attorney, to demand startling socio-political alterations for his caste (in South Africa) and therefore he was old and mature enough to be held accountable. Naturally, after becoming ‘the Mahatma’ any sane person would avoid racist controversies but it is Gandhi’s choices before becoming one that should not be erased from a conscious history. After all, had he come from an age (or place) of downright ignorance, people like Ambekdar, would not have existed. Ambedkar’s ideas are a testimony to the cliche that there is always another, if not better, option.

Leaders as well as citizens should persevere for more egalitarian alternatives so that modern slavery, in all its forms and internal classification, is purged from not just the brown community but the entirety of humanity. May the contemporary postcolonial citizenry be able to look into itself one day and ask and, more importantly, redefine what it means to be brown.

Fanon in his book Black Skin, White Masks emphasizes the power of a vital present to change the future, which the brown community should take cue from in the following words:

“And this future is not the future of the cosmos but rather the future of my century, my country, my existence. In no fashion should I undertake to prepare the world that will come later. I belong irreducibly to my time. And it is for my own time that I should live.”