The Death of Patriotism

Patriotism, the feeling of love, devotion, a sense of attachment to a homeland and an alliance with other citizens who share the same sentiment, is a device most exclusively monopolised by the right. This in itself is of course a generalisation. The right embodying a great many from across the globe, many of whom detest each other and their respective views. Few can deny that in an increasingly polarised political world, those on the right have used the term to legitimise their own positions and as a weapon to demonise those with left-wing, progressive or socialist ideals. It surrounds Trump’s discourse, embeds into Brexiteer sentiment and has infected every recent election across the world. Throughout Europe, the Middle East, South America and Australasia, patriotism has been implemented with varying degrees of success but is nevertheless omnipresent. However, more recently, members of the left have begun to question the right’s hold on ‘patriotism’. Gordon Brown stated that we are faced by the “hijacking of patriotism” caused by Boris Johnson and Nigel Farage as they play with British unity. Meanwhile, in America, Elizabeth Warren has stated that a true “economic patriotism” is better than Trump’s hollow “America First” promises. The hypocrisy of the right and their apparent ‘country loving’ ideals are being revealed. However,” the full extent of this needs to be unearthed. 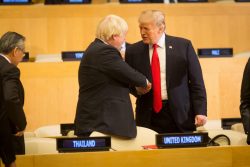 We shall begin by analysing the patriotism in which those in British politics claim to exhibit. Boris Johnson is an easy one to start with and, since he’s our new ‘elected’ Prime Minister, it’s certainly relevant. One sec, just check that I’m… yup still awake… and sane, think so… anyway, Boris Johnson. A man who once explained away the blatant lies that he wrote in The Times when employed there as a journalist as an “excess of patriotic zeal.” and who stated that he promised to embrace “the ideology of globalism” and “the doctrine of patriotism.” Yet, generally speaking, he himself does not overuse the word ‘patriotism’ itself but relies on others to do so for him. The Yorkshire Post for example commended Johnson for having enough “guts and patriotism” to stand up to the EU Bureaucrats, while the Times have declared that the left should be afraid of Johnson’s “simple, unquestioning patriotism”. Who is Johnson, the right-wing press asks, but a man with a love for his country? He is, I answer, a man with a love only for himself.

Johnson has become the very epitome of the modern Brexiteer. Economically cautious? No. Socially conscious? Of course not. Although my goodness, he loves his country, and that’s all we need to get us through our departure from the European Union. In such a narrative our exit is painted to be a moral obligation. At any cost, Johnson declares that we must leave the villains that plot on the continent, patriotism demands it. There’s only one problem. Well no, there’s a terrifying number of problems that are increasingly multiplying as our nation’s future moves ever-closer. For the sake of this article, there’s only one problem with Johnson’s ‘at all cost’ mentality which is the cost to others. We made it through the war, didn’t we? Surely, we can make it through Brexit? Rest assured that no matter how severely the economy is affected, however many people suffer, whatever disunity is resultant from departure, Boris Johnson will do just fine. And, he’s not alone. Jacob Rees-Mogg, the Brexiteer for those who think that Johnson just isn’t pedigree (by which I mean inbred) enough, appears not only to have saved himself from any Brexit hardships, moving his firm to Ireland, but is even making money from it. An investigation by Channel 4’s Dispatches has revealed that he may have earned up to £7,000,000 from Somerset Capital Management (which invests in emerging markets such as China and Russia). Yet, he confidently assured the public that Brexiteers are “made of sterner stuff” in the Express. Such faith he has in other people’s money, stability and patriotic fervour. 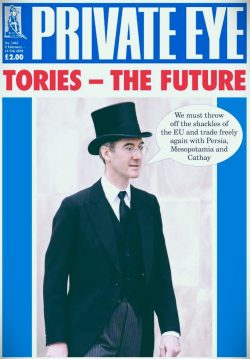 Although figures on the right are often the first to declare their patriotic duty, the question must be asked, what sort of patriotism is this? They emerge as Lord Cardigan, cheering the Light Brigade along in a charge, into the valley of death. Except it’s somehow worse, even Cardigan took part of the charge, Johnson and Rees-Mogg are determined to remain, watching safely from the comfort of their tent. These are deeply unpatriotic men, with no interest in the stability of their country. They use patriotism as a tool for their own political and economic interests. Firstly, because it is extremely effective, and secondly, because they have nothing else. However, the left seem extremely reluctant to openly announce their patriotic fervour. Rory Stewart was certainly quick to call out Johnson for his hollow patriotism, yet Jeremy Corbyn still squirmed at the label before declaring it unenthusiastically. The left could do a great deal with a bit of patriotic enthusiasm: what better displays are there for your country than paying your taxes and supporting the NHS, education system, roads, infrastructure, and the countless other causes that our money goes towards? This is a patriotism not in favour of isolationism and aggression, but in truly supporting those who are part of our nation. Greedy, sneaky elites have laid a strong claim to a world that should bear no resemblance to their actions. Therefore, it’s time for others to take it away from them, and to implement it towards something good. A nation which supports its poor, ill and marginalised citizens. Which uses its fortunate position to help others across the globe. One that embraces the histories of those who worked to further progressive values, whilst also acknowledging the wrongs of our past.

Theresa May was wrong when she declared that: “If you believe you are a citizen of the world, you’re a citizen of nowhere”. I can declare my love for my identity as a Globalist, a European, a Briton and an Englishwoman. Patriotism doesn’t have to conflict with progressive, left-wing and/or internationalist values. We should not let the rich preach to us poverty and modesty, to refuse to acknowledge their shallow patriotism is to disarm them of their most powerful weapon against us. I can love my country just as well as anyone. Indeed, my political ideology is based around my sincere belief that these values will help others who are part of my country and those who live beyond it. To be a patriot is to love your country. To love your country is to love its people. To love its people is to support and help them as best you can. Johnson, Rees-Mogg and their lackeys have no interest in doing this. What lies behind the rhetoric is only greed and manipulation, as the rich wrestle for more power and pray on the most vulnerable and poorest in our society. The death of patriotism is upon us. Its resurrection must be something better or our suffering and the suffering of others will continue.