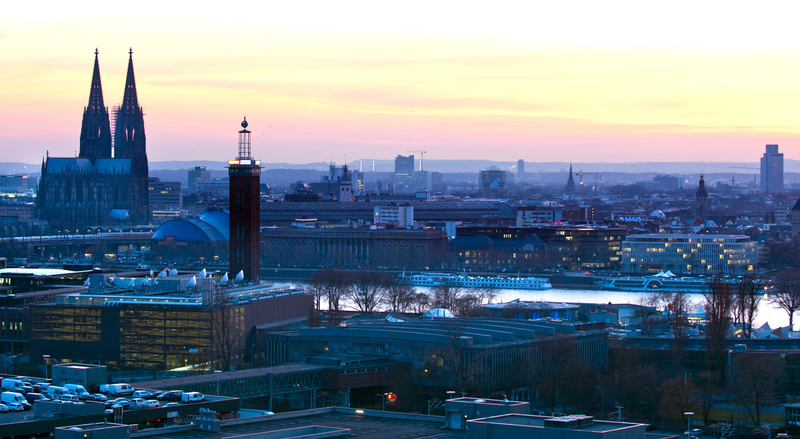 “Often I listen to the warden’s steps at night,

Often late at night I recall

how it feels to kiss you Mischa”

Nestled on an unassuming street just on the periphery of Cologne’s bustling Altstadt district lies the El-De Haus. To the untrained eye this art deco stylised concrete building blends seamlessly into the Cologne cityscape, its only giveaway the steady stream of schoolchildren entering and leaving its metallic double doors. As you enter, the grand marble entrance hall suggests a history of wealth and glamour, telling nothing of the horrors that once lay within.

Initially the home of jeweller Leopold Dahmen, during the war it became the headquarters of the Gestapo in Cologne. In a tragic twist of fate, despite 90% of the city being destroyed during allied bombing, among the few survivors was this hub of the Nazi secret police, officially known as the NS Documentation Centre. It holds the shorthand name El-De Haus, after the ornate initials inlaid above its door, and is now a museum and memorial for the Nazi abuses and crimes in the Second World War.

When English people talk about war memorial in Germany, at least among the general public, you generally encounter some punchline along the lines of “don’t talk about the war” – usually in some equally stereotypical accent. The consensus among us at least is that the period of 1939 – 1945 has been wiped eternally from the collective German psyche. However, the truth couldn’t be further from this.

It was looking at these huge flocks of schoolchildren entering this ex-Gestapo base that made this point hit home. In fact, looking at its exhibit on the abuses and compulsion of the Hitler Youth in Cologne, all told through chilling first hand accounts, you can’t help but feel like this museum is designed for Germany’s youth. To remind them of what their ancestors did and went through and how Germany was taken over by hate. All surmised by what awaits you in the lobby: a chilling children’s drawing of the innocently named “old sauna” and “new sauna” – at Auswitz-Birkenau concentration camp. It’s author, a child of six, was one of many to spend some of his last days in the El-De Haus’ basement, a small stop on the journey to Auswitz.

All in all it’s designed to fill all of us, not just Germans, with a sense of Democracy’s fragility. Sometimes it’s easy to conceptualise Nazi Germany (and its Axis Allies) as a historical anomaly; a short fascistic blemish on an otherwise seemingly perfect record for modern “Western Democracy”. Not something that could easily happen, or happen for a long time – certainly not something that could happen again. The El-De Haus stops you from ever assuming that again. The last thing you would feel as you left that building is safe, and that’s without even mentioning its chilling underground exhibit. 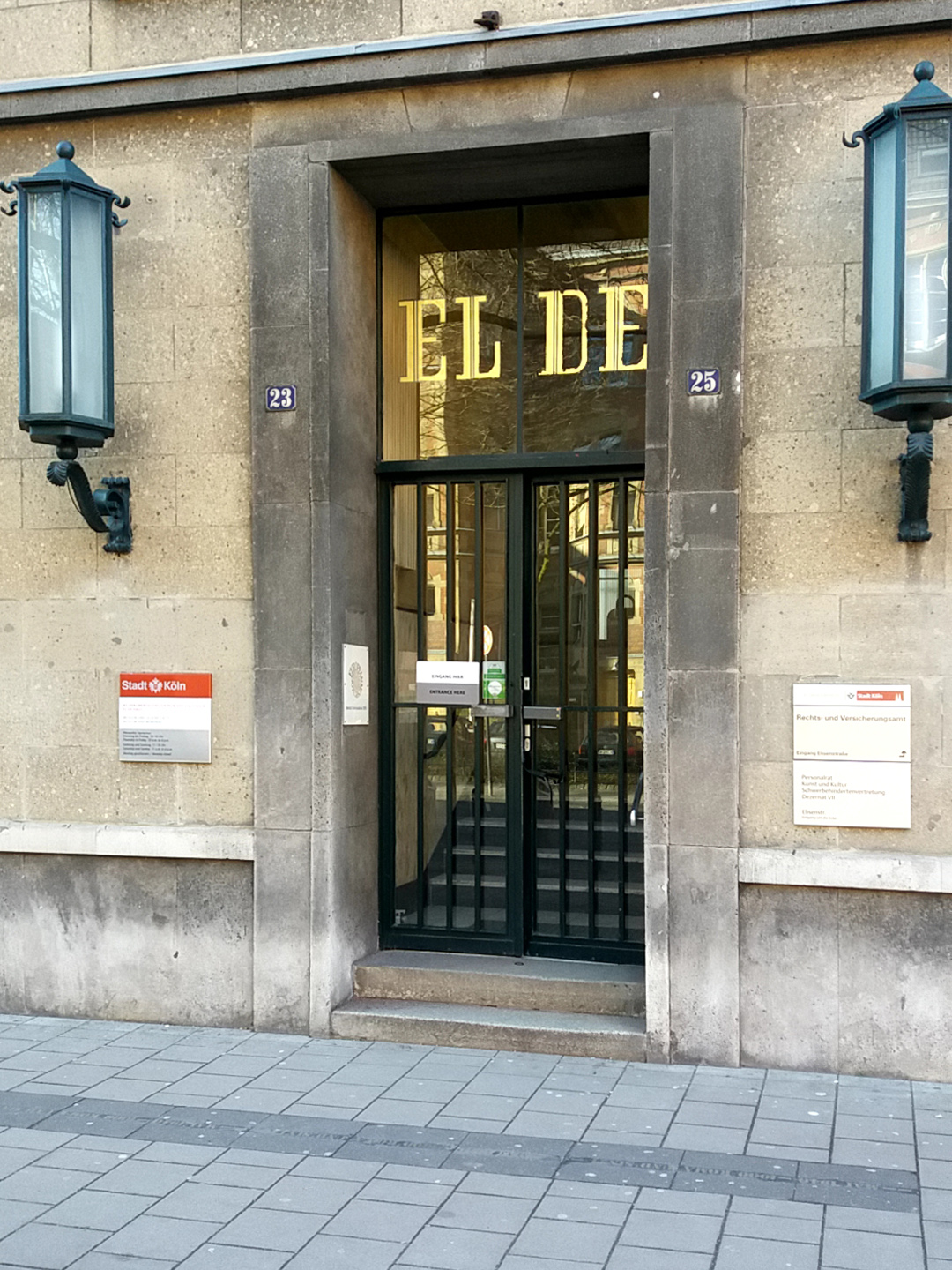 The unassuming front of the El-De Haus memorial
Wikimedia Commons

In the building’s basement lies the Gestapo’s old prison cells. What cuts most here isn’t the perfectly preserved 4” by 6” cells, that once held 33 people at a time, or even the sub-basement where prisons were taken to be inaudibly tortured. No it’s the walls that strike the hardest blow. They are adorned with nearly 2000 inscriptions; messages made by prisoners, painfully carved with anything from lipstick to fingernails. Each one tells a story of one of the thousands prisoner who were once housed here. Some document the deaths of companions, some try to instil courage in other prisoners, whilst another simply reads “you’re mad”. Some bemoan their conditions. Some proclaim “death to all fascists” One man simply pines for the touch of his lover. Each is painfully, tragically unique. The languages range from German and French, to Russian Ukrainian and more. A million and one little micro-histories fill these walls, each more cutting than the last. Thousands of these prisoners would be sent on to concentration camps, or even just executed in the building’s courtyard. These carvings would prove to be their last wills and testaments. 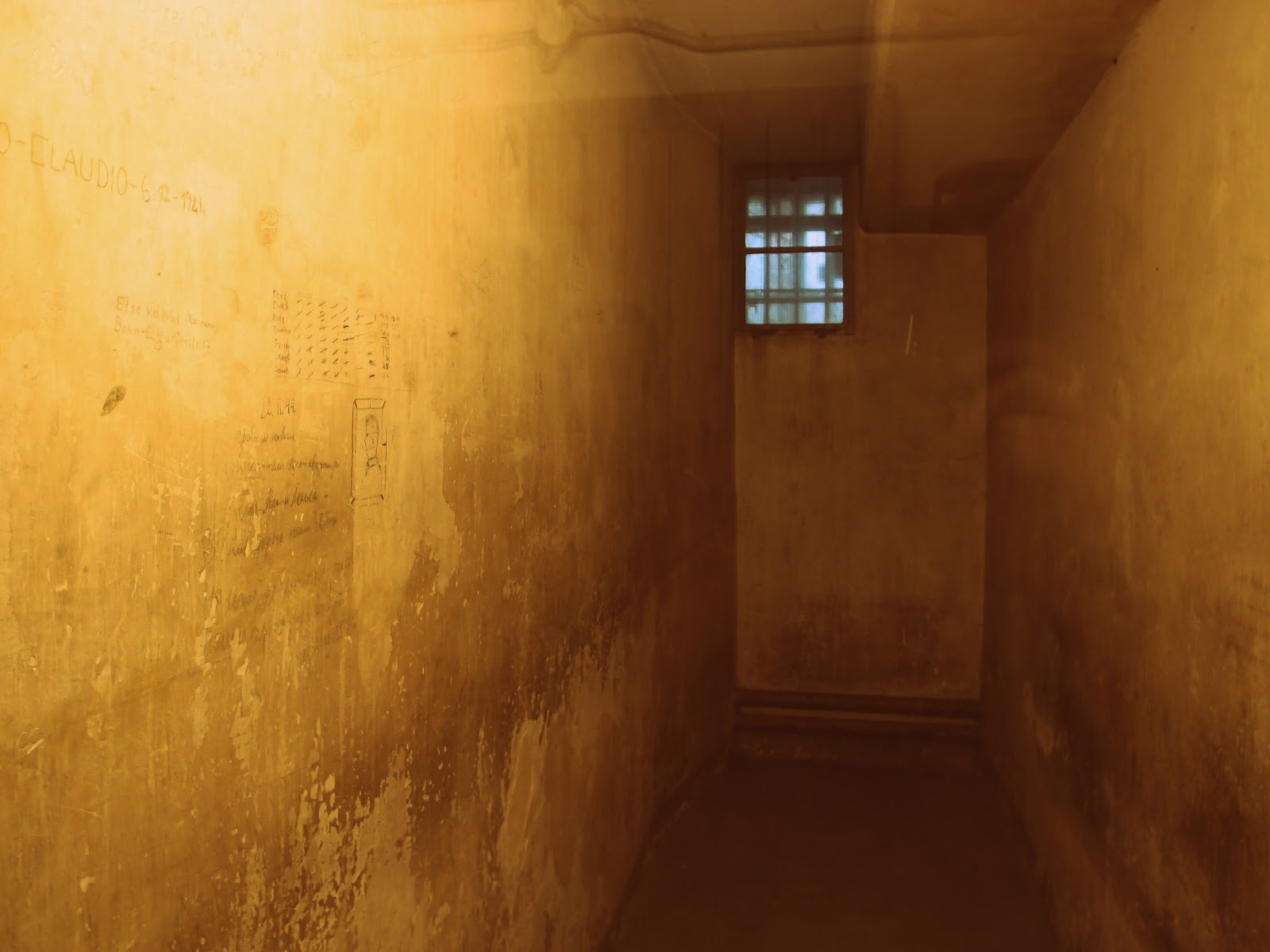 An example of a cell, showing the wall adorned with prisoner’s carvings
SSM

Sometimes looking at other memorials something feels missing. With death tolls like 6 million, it’s hard to imagine what such a number looks like in reality. El-De Haus reminds us that each victim of the Holocaust was an individual, each a vivid spark; a burning light snuffed out too early. This is what makes this memorial museum so painfully effective, and so painfully necessary.

Cologne is famous for being Germany’s ugliest city – it is often said “the city is ugly, but the people are nice”. Throughout you’re constantly surrounded by a mishmash of concrete and steel, in that Brutalist style only found in postwar architecture. Cologne was heavily bombed during the war and few buildings survived the onslaught. Rebuilt in the shadow of that war, its harsh concrete design speaks to a people still trying to deal with their role in the Nazi state, the war and most of all the Holocaust. Beyond the Kolsch, the markets and the football, all of Cologne is something of a memorial. A concrete reminder of a nation’s trauma, its crimes and the eternal need for remembrance.