Netflix and the Fight for Body Positivity

Rachel Morgan examines the degree to which Netflix’s new show Insatiable manages to achieve the body positivity it spends its runtime striving for. 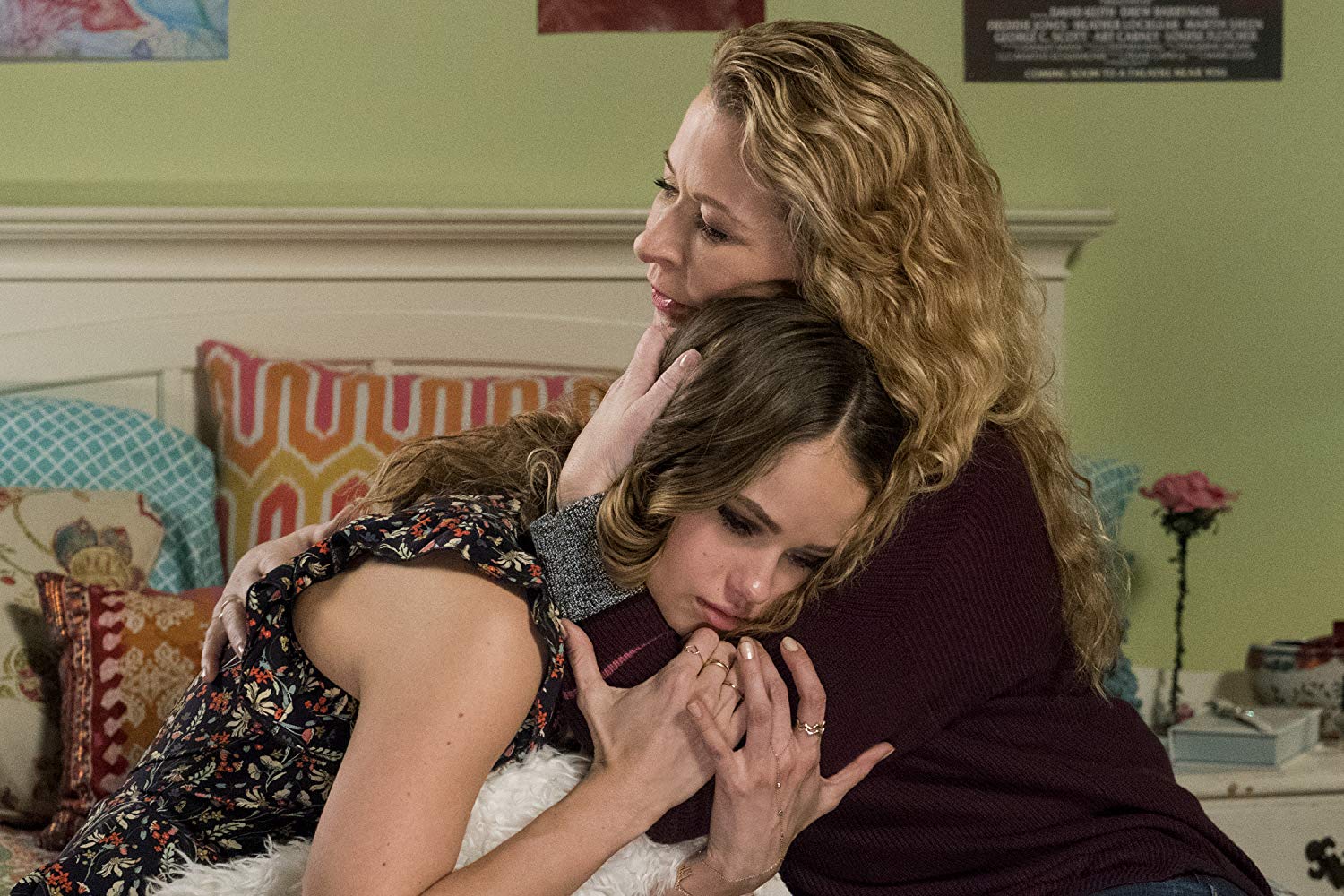 Netflix’s Insatiable is incredibly disappointing to viewers that expected more from a show that deals with such important and sensitive themes.

Insatiable is, at times, a bizarre story of a young woman whose life changes drastically after weight loss. As the show opens, Patty (Debby Ryan) describes her change of fortune after a violent encounter with a homeless man. After being rejected by her crush, she sits defeated on the school steps and comforts herself by binging on chocolate. Patty and the homeless man get into a fight and the result is a punch to the jaw which disables her from eating solid food. After this event, we don’t have the privilege of watching Patty’s weight-loss struggle, if there indeed was one. Instead, the scene cuts immediately to the reveal of a ‘new and improved’ Patty who (surprise!) has lost a lot of weight and is instantly more attractive for it. Having ‘glowed-up’, Patty’s lawyer, Bob Armstrong (Dallas Roberts), notices her beauty and mentors her into becoming an American beauty queen. Although her physical appearance opens doors for Patty, her vengeful, spiteful personality (which we see worsening over the course of the show) quickly turns her life into a chaotic mess.

Within the first forty-eight seconds of the show the producers have dressed Debby Ryan in a fat suit, and have made the notion of being fat a nightmare. As Patty walks ashamedly through the corridors of her school, frighteningly, every other teenager in sight is consistently thinner than she is. Upon this odd discovery, I was feeling quite disturbed. I wondered whether these first few minutes of the show were so delusional because they reflected Patty’s own distorted vision of High-school, where she stood-out as the only fat girl in the world. However, by the end of the first season only one other character is fat. This character, Dee Marshall (Ashley D. Kelley), is a great example of how Insatiable relies on stereotypes to be relatable. Dee embodies that over-used, racist ‘sassy’ black woman stereotype, which I feel the show uses to attempt some form of diversity. Much like Patty’s body standing-out amongst the crowd, Dee’s character too seems weirdly staged and inauthentic. The two are clearly tokenised. These are just a couple of examples from an exhaustive list of stereotypes that appear in Insatiable.

Over 200,000 people have signed a petition for Netflix to cancel its controversial show after the trailer was released in early August. Petitioners argue that it poses a danger to Netflix’s youngest viewers because of its obvious fat-shaming qualities. The show’s use of a fat suit and the lack of fat actors and actresses adds to this argument. Following the release of the Insatiable trailer, critics have been quick to comment on the show’s bad treatment of serious themes, most agreeing that the show has failed in what it set out to do. However, there are some who would agree that Insatiable was never a show with anything intelligent to offer its viewers to begin with. Roxanne Gay’s article “Insatiable is ‘lazy’, ‘insulting’ from start to finish”, expresses her disappointment with the show. Gay writes that at a first glance, all of the show’s themes were promising and particularly engaging to her. However, as the title of her article suggests, the creators failed to engage with the hefty subject matter.

My opinion of Insatiablehas to correspond to Gay’s, in that I found the show incredibly lazy, and therefore quite dangerous. Lauren Gussis, writer of Insatiable, took to twitter to defend her show, arguing that fat-shaming is “embedded in the DNA of the show.” When I read Gussis’ take on the problems we see in the show, I tried to understand her perspective. Gussis claims that the show uses ‘satire’ to critique fat-shaming. She also adds that the plot line is not simply “somebody gets thin, becomes happy, and gets everything she wants.” This is clear from observing Patty’s experiences as the show progresses. Yes, she loses weight, but this doesn’t transform her life into a fairy-tale. Instead, Patty’s poor decisions, one of which is shockingly dark, problematise both her and her friends’ lives. It’s clear that Patty is no heroine just because of her ‘attractiveness’. We see that Gussis, but unfortunately, it’s your execution of Insatiable that is so troubling.

Humour in itself isn’t necessarily the problem in Insatiable. Often, when dealing with serious topics, humour is an engaging way to de-stigmatise issues. In Insatiable, it is arguable that Patty is suffering from binge-eating disorder. Her habits surrounding food are in no way healthy. Her weight gain is due to using food as a coping mechanism to fill all of the voids in her life. When Patty encounters a problem, her solution is to gorge on food, and the show often depicts binging by having Patty literally stuffing food into her mouth. The humour in Insatiable revolves around Patty’s binging. Early on in the season, she partakes in a craw-fish eating competition after having an emotional breakdown. The scene is supposed (though it’s not very tasteful) to be funny. The problem with such jokes is that the producers only ever associate fatness with disordered eating. In Patty’s case, her habits are unhealthy, but this isn’t always why people are overweight. By having a lack of fat actors and actresses, or any understanding of what it is to be fat, the show presents a danger in portraying all fatness as problematic. This is fat-shaming: whether the writers of the show intended it or not. 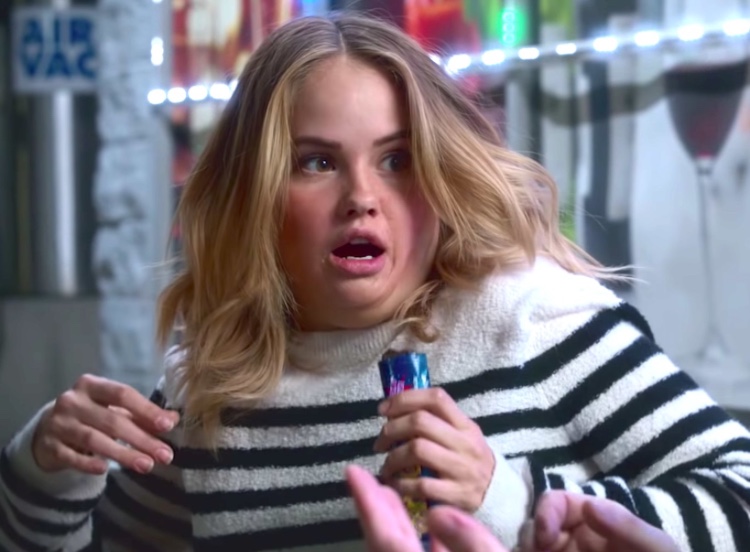 of humour that the show uses is problematic because instead of challenging fat-shaming, Insatiable actually promotes it. At no point does the show attempt to challenge the stereotypes it puts forward. Another example is the notorious compilation at the start of the season, depicting Patty in a number of humiliating scenarios. One of which shows her stereotypically struggling to jog in P.E. Even worse, Patty actually collapses because she hasn’t eaten in several days. The question we must ask here is, what does this type of dull humour do to young viewers? Those potentially struggling with their self-image. Stereotypes in Insatiable aren’t called back to attention once they are put out there. This doesn’t challenge fat-shaming, instead, it endorses it.

Unfortunately, this isn’t the only problematic show that Netflix has produced recently. 13 Reasons Why received a lot of backlash in early 2016 for its inaccurate presentation of suicide. The writers defended the show by arguing that graphically portraying the act of suicide is key in the de-stigmatisation of mental illnesses. It is always and will always be important to include suicide and the mental disorders and illnesses that lead to it in the media. However, critics noticed that the act of suicide was being used as a narrative tool instead of being portrayed accurately and realistically. In the show, Hannah Baker (Katherine Langford) appears to commit suicide on the premise that others drove her to do so. The plot revolves around Hannah’s tapes, a bid to get revenge for being bullied. Alternatively, Hannah at least wants people to acknowledge that what they did to her was wrong and had its consequences. Ultimately, this is not a plausible reason for committing suicide. In reality, mental illness is the culprit that takes lives. Strangely, 13 Reasons Why hardly goes into detail about Hannah’s depression. The dangers of inaccuracy in a show that handles a serious topic, is that mental health, yet again, is misunderstood.

Insatiable falls into a similar pitfall by failing to talk about the struggles of weight loss both as a physical and as a mental struggle. Devastatingly, Patty’s weight-loss is crudely brought about by violence, and the lack of screen time given to ‘Fatty Patty’ (her former nickname) undermines the reality that weight-loss is not just a quick fix to happiness. With the rise of the body positivity movement, an important point has been made. All bodies, including those with a little (or a lot) of fat, are valid, and should be respected. Body positivity activists like Tess Holiday argue that bodies should be celebrated without having to include health-talk in the conversation. This is something I can relate to. For the first time in my life I can finally say that I almost love myself. In the past, ‘fat’ was always a crime. My body was never good enough because of the ever-fluctuating number on the scales. What provoked this feeling of inadequacy further was the constant reminder that fat was ‘obviously’ a risk to my health. I wasted my precious teenage years worrying about whether 10 stone was too heavy for a girl; whether I was ugly because of this number, and whether I was healthy enough.

But ultimately, bodies are diverse and come in all shapes, sizes and ‘numbers.’ I realised that the extra fat on my hips was more a burden on my mental health rather than any real danger to my physical health. This was not my fault. Instead, it was created by the lies that I was constantly fed from childhood and sadly, to this day.

Insatiable doesn’t do what it promised to do. It doesn’t offer hope to those teenagers struggling with the number on the scale, much like I did. It doesn’t use humour to defeat fat-shaming, it only endorses it, and itself fat-shames. Instead, its use of stereotypes like Nonny (Kimmy Shields), the closeted lesbian who lusts for her best friend (*sigh*) aren’t made any better by the end of the season. Nonny doesn’t pull herself together and try to be strong much as I wanted her to be. Instead, she continues to follow Patty around, madly in love, until the very end. The tasteless humour that Insatiable uses up until the last episode is so utterly useless that I ended up finding the show to be weirdly entertaining. Sometimes it’s okay to enjoy a show just because its terrible. But since this is a show that is meant to be dealing with important issues properly, it all becomes a bit more sinister.

I think the answer to a better version of Insatiable is fairly straight forward. Though frankly, anything would be an improvement to what Season One is now. The show had all of the potential, all of the material to make it a good and useful show to those unfortunate teenagers (and myself) watching it. If it would have utilised its risky humour a little better, it would have been much more effective in what it sought out to do.

Rachel Morgan is a Final Year English Literature student, interested in issues of body positivity within pop culture and beyond.