The World According to Owen Jones 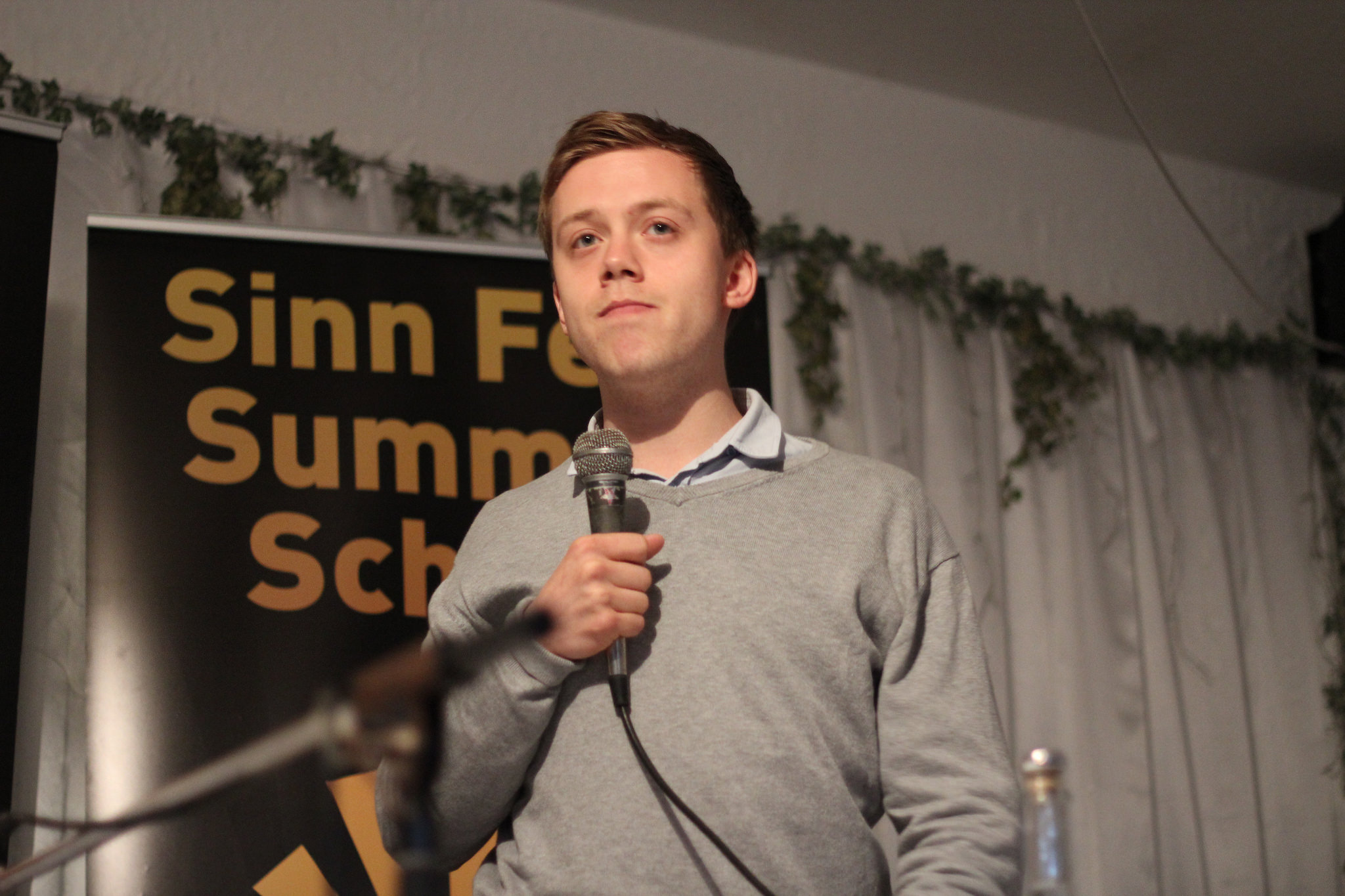 On the night before Guy Fawkes Night, a very different political movement was taking shape below the rafters of Warwick Arts Centre. Owen Jones was coming to speak as part of his Building A New Britain tour. It’s rare that political speakers are hosted by the Arts Centre itself, a testament maybe to the pull this man has. A rather sparse and surprisingly elderly audience was spattered across the Theatre, albeit supplemented by a healthy collection of Arts Centre staff looming in the background. As the show opened the lighting was stripped back and the stage black and empty; all to draw vision towards the speaker.  The tension was palpable as he entered the stage, the auditorium seemed ready for a release.

Despite his media presence however, Owen Jones is no native of theatrical performance. He often looked rather lost on such a grand stage. Like an abandoned seaman on a lonely, stormy ocean, the notes on his phone the sole anchor to draw him back. Some commented on this lack of stage presence as an upset. For me this was precisely what worked about this event. There were no frills, no pomp, no pretensions of grandeur or superiority. Bar a simple bipartite framework there wasn’t much of a structure to the talk – it wasn’t excessively organised or segmented. This was down to earth; more than that it was real. His tone was friendly. He joked often, at the expense of Finland, The Financial Times but especially himself; “a gobby old Macaulay Culkin lookalike”. He often demonstrated his points with individual cases that allowed them to pack more of an emotional punch, like that of ex-serviceman Steven Taylor – denied his unemployment benefits for volunteering with the Royal British Legion. There was a rare intimacy to it, as if we were long time friends just having a conversation over a pint or at dinner. The kind of situation where complex terminologies and ideas, like Liberalism, Individualism or Post-Capitalism, that often act as unrepentant barriers to engagement in haute politics for normal people, were explained informally in more down to earth terms. To say he did not look at home on a stage, which in many ways he didn’t, is to miss the point. In fact, I feel he would find it a complement. These events weren’t intended to be what we are used to.

Throughout the talk he seemed intent on flipping on their head all the everyday political assumptions society holds. He reframed things like the record bonuses given to UK bankers and the 26.7 billion in yearly subsidies given to private landlords through things like Negative Gearing and Capital Gains Tax cuts, as “socialism for the rich”. Choosing Labour would not be choosing socialism per se, but choosing who to provide socialism for. He flipped the constant accusations of Corbynite radicalism by comparing his programme to that of the rest of Europe. Their presence highlights the disconnected rut British politics now finds itself in. Most of all he took issue with the seeming monopoly on freedom held by the right wing. How can normal people be free when facing the kind of economic hardship rampant today, in a society where inequality is at sky high levels. How can the right talk of freedom when 7 million of us rely on insecure, casualised work to make ends meet? When household debt is at record levels of £200 billion pounds and 22% of the UK population live in poverty? When 8 million Brits live with food insecurity, and some 4.7 million often go a day without eating? It all evoked that old adage: “the freedom to starve is no freedom at all”. He relished in using right wing thinkers’ own words against them – especially Milton Friedman’s old adage that in times of political crisis, radical change depended on “the ideas lying around at the time”.

This borderline myth busting was interesting to say the least. The focus on modern ideas like UBI and reduced working weeks marked a move toward a more Post-capitalist ideas and a break from old, tired statist beliefs that defined 20th century socialism. Maybe these new(ish) ideas would provide the ideology and drive that many thinkers, like Slavoj Zizek, have said the contemporary left now seems to lack. These parts of the talk were actually very refreshing. Other parts however were less so. 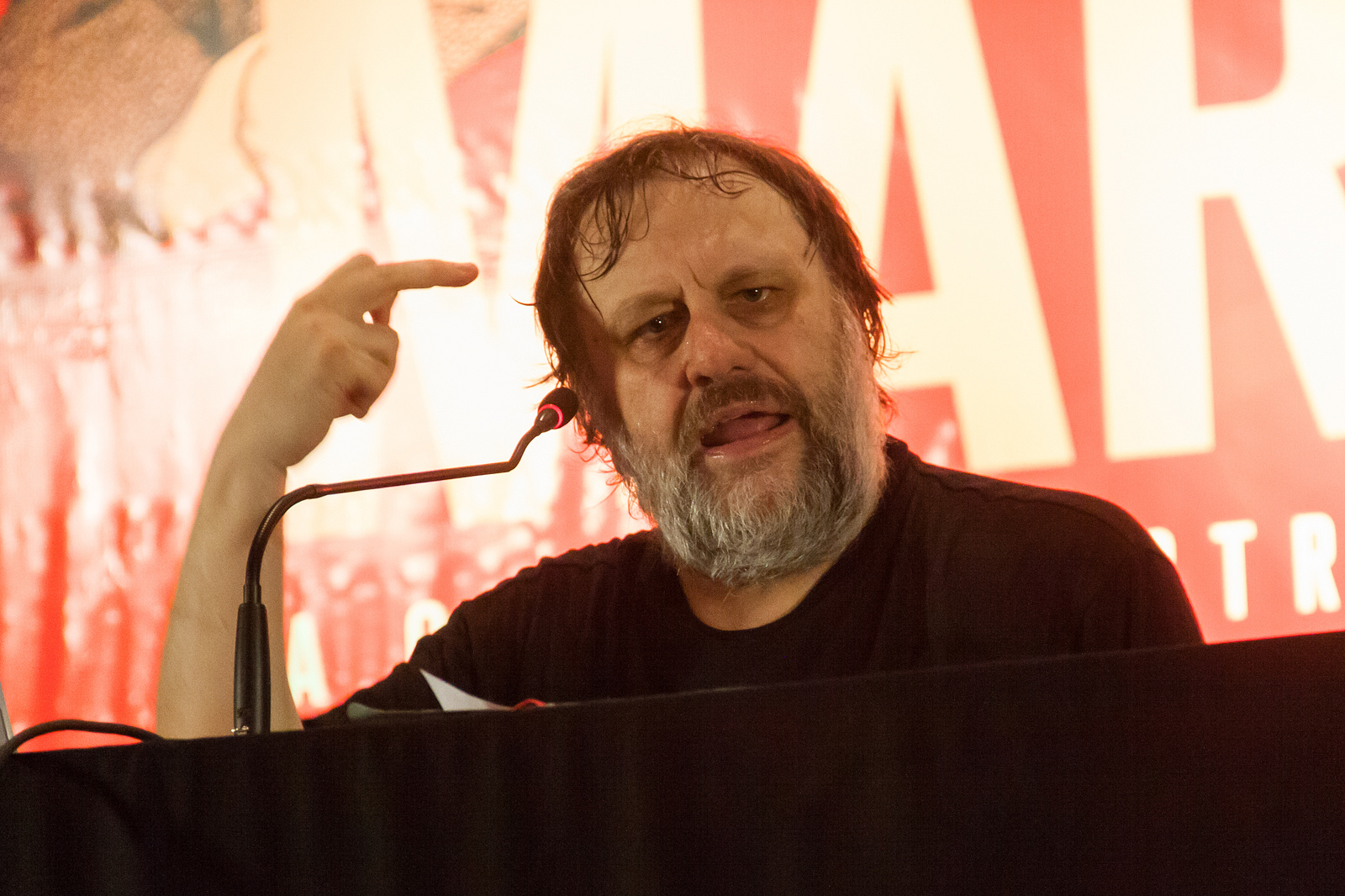 Slavoj Zizek is one such thinker who believes the left should embrace new ideas
Image: Flickr / Universidade de Brasilia

“The first half of this event is going to be pretty depressing”. Barely seconds into the talk and already things begin to be framed as a dichotomy. By necessity, there is a chance for hope in this statement – a recognition that if one half is about the “depressing” problems, the other will talk of solutions. The initial picture he painted was one of turmoil. He would talk of Bolsonaro and Brazil, Trump’s ever-encroaching authoritarianism in America, and the right populists rising up across Europe, from Hungary to Italy and beyond. He would elucidate on the reasons for this; the alienation of normal people from a failing centrist political consensus after the financial crash. The electoral death blows to centrist parties across Europe, indeed the world, over the last few years certainly backed this idea.

All a justifiable hypothesis then. Soon however he would offer the miracle tonic to such instability; socialism. This panacea only grew in power as the talk went on. Electing Labour, it seems, would cure all our economic woes, both micro and macro, it would stop supposed bias in the media, debilitate the “national and transnational ruling class” and allow for pacifism and potential future nuclear proliferation. It would even allow society to move past “all oppression, racism, xenophobia, and abuse”. It’s the word “all” that really struck me like a pinprick. Such utopianism leaves me ill at ease. Maybe it was from reading too much Camus – anyone familiar with The Rebel knows of the idea that excessively utopian goals allow for atrocities to get justified in light of those lofty long-term aims. Maybe it was because I felt it misrepresents the left; I would argue we aren’t trying to fully cure some disease-ridden world, merely order society in the best interest of the whole. Or maybe it was a result of my writings as a journalist – in all this (albeit short) time I have learned one thing; certainty is elusive. We live in a world of grey areas, and nothing – be it human beings or politics exists in extremis. Whatever the reason however, something about it didn’t sit right with me.

“In times like this we must offer an unapologetic break from the broken Status Quo or face being engulfed by the far right”, he would soon say.  He did not see the future it seems as set and determined, as so many of “Vulgar Marxists” on the left do. Indeed it seems we lie on the precipice. We live and breathe potential each and every day. We are the agents of democracy and change, each and every one of us, and we have a choice to make between either the alt-right or democratic socialism. You can see this world view’s appeal. A shining light on dark horizons. Hope in the hinterland of despair. A sharpened knife cutting through the hazy grey area that is life. In short, it offers certainty in times of crisis.

But what freedom is there in a choice with only two options? To use the common adage: politics is a spectrum not a binary. Yet such dangerous over-simplicity stretched across the talk. It was this that led him to denounce the BBC as intrinsically and overwhelmingly right wing, even aiding “fascists”. It was this that led him to label the Financial Times as biased right wing and neoliberal (seemingly missing the irony of using positively their investigations into nationalisation policy just a sentence later). It was this that even led him to reframe a question I asked about casualisation, overwork and the economic abuse across the journalistic field into a question of the homogeneous demographics that make up journalists. Whilst it is obviously true journalism needs to diversify, it shouldn’t be that hard too to admit that there are also problems in the industry for all journalists, even the “biased” ones.

It was common for him, among many on the left, to write off all non Corbynite leftists as akin to the tories. To ignore any concept of nuance and throw around terms like Neoliberal to describe anyone from Ed Miliband to Jacob Rees Mogg. Such unflinching belief in an individual or political group stops any healthy self-criticism – it’s no coincidence Jones finds himself having to defend often undefendable actions by Labour MPs and members, as recently with scandal-hit Labour MP Kate Osamor. When you find yourself unable to even admit the wrongdoing of an MP who had hired her own son, a man later arrested for carrying £2,500 worth of cocaine, you’re at the very least turning a blind eye to nepotism and corruption. It is such things that have fuelled Jones’ problems around Tribune magazine and refusing dealings with broadcast journalists. Closer to home, it is this that leads heads of Pride groups to say “tory gays can f**k off” and “go home”, and Labour chairs to suggest it’s not homophobic to assume all gay people must be left wing. Such absolutism is inaccurate and unhealthy; it closes us off from differing of opinion, rids the world of any nuance and turns all politics into a game of us against them. It alienates anyone with opinions even slightly differed from ours. We have all seen what such unflinching certainty leads to – puritanism, tribalism and fanaticism.

Don’t get me wrong this isn’t something monopolised by the left. I often find one of the greatest ironies of modern politics, is the intolerance of criticism and difference from a right-wing supposedly concerned with overly sensitive leftists. The infallible personality cult of Trump is one result of this, the perpetual anger machine of Fox News is another example. Indeed just a couple decades ago it was the Conservative right that was leading the censorship crusade against supposedly transgressive performers like Bill Hicks or Monty Python. It is this political vein that has allowed many Conservatives to convince themselves all is well as the perpetual dumpster fire that is Tory economic, domestic and foreign policy keeps growing. My issue with Owen Jones then is not his ideology or politics per se, but how he does it. Simply put, doubt is healthy, certainty is not.

In the days after the conference Jones published an article entitled Britain is chronically overworked. A four-day week would liberate us, that said verbatim much of what was mentioned at this talk. Maybe he simply reads his article ideas at these events, and we as commentators interpret a grand worldview where there is none. In light of all this, it’s hard to tell what the future holds, for the left, for the country, or even for Owen Jones. I guess it all depends on these “ideas lying around at the time”.