Magic Realism in The Weimar Republic

Alpana Sajip takes us around the Tate Modern’s recent exhibition, and the history behind this Post-Expressionist movement 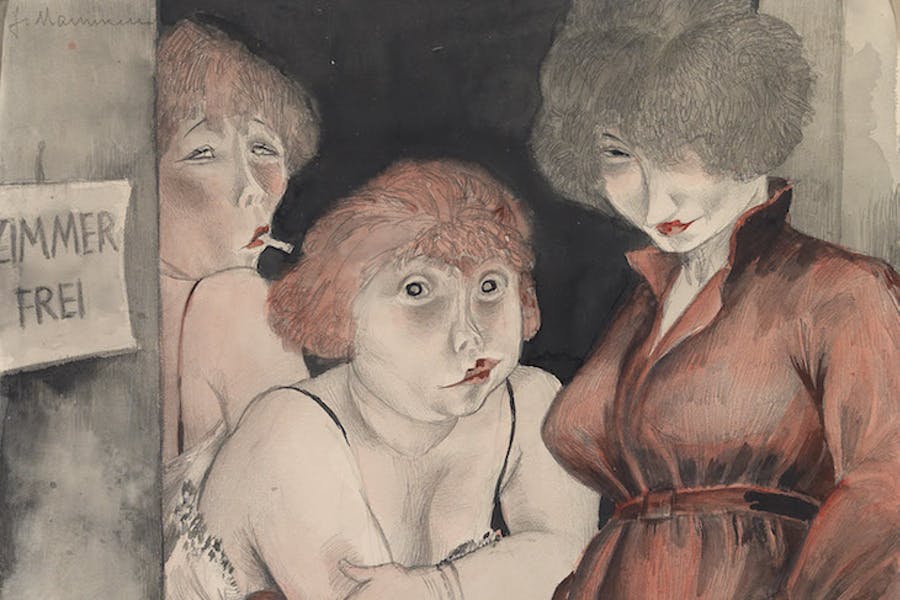 Often linked to the literary mode that gripped Latin American fiction in the ‘60s and ‘70s, the Tate’s latest collection Magic Realism: Art in Weimar Germany 1919-33 illuminates a perhaps forgotten origin of the term in artistic circles. In many respects, the art showcased here is diametrically opposed to what we might consider to be defining characteristics of magical realist fiction – how has the idea changed, and what is its legacy today?

The term ‘magic realism’ was first suggested by the German art critic Franz Roh in his 1925 book Post-Expressionism, Magical Realism: Problems of the latest European Painting. It was to be eclipsed by Gustav Hartlaub’s term Neue Sachlichkeit or New Objectivity; however, the curators of this exhibition have chosen to return to the more enigmatic coinage, perhaps to reflect the uncanny or mystical quality that characterised much of the realist art emerging in the aftermath of the Great War. 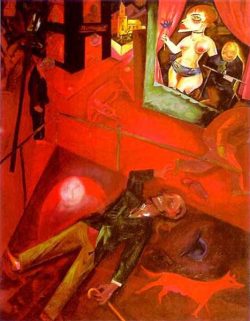 In some senses, a certain distaste for expressionism arose in German art in the post-war period; such idealism seemed “self-indulgent” in the face of a broken society. Roh’s criticism characterised a return to realism through a modern perspective, a desperate search for order in a disordered world, and a new wonder and appreciation for the real, for life as it was. Life in the ‘Golden Twenties’ indeed had a certain magic to it, both liberating and dangerous; from cabarets to circuses, frequenting once-transgressive spaces became more commonplace as people began to indulge their darker impulses. Scenes such as those depicted in George Grosz’s Suicide (1916) – a powerful, scathing social critique – and Otto Dix’s etchings Butcher Shop (1920) and Lust Murderer (1920), with their exaggerated facial features and thirst for blood, embody the uncanny grotesquerie of modern life whilst retaining some aspect of the ‘real’, evoking the very real fear of further social collapse. I was reminded immediately of more modern works such as Faith Ringgold’s American People Series #20: Die (1967) – the same hypnotic eyes, the same threat of dismemberment and blood, the same feeling of terror.

Contemplating the necrophilic undertones to many of these artworks, then, I was struck by the varying attitudes towards women in Weimar art. During the period there was, of course, a move towards liberalism and a relaxing of the constraints that defined women’s social roles, allowing them more sexual freedom. And yet, I found the misogynistic tone of some paintings to be pervasive and even suffocating, a key contributor to the ‘uncanny’ element which is so determinant of magic realist art of the period. While the nudity in Otto Rudolf Schatz’s Moon Women (1930) lends the painting an ethereal beauty, in Otto Griebel’s Two Women (1924), despite their power stances, we feel a sense of voyeurism and complicity in this objectification of the female nude. Similarly, Rudolf Schlichter’s The Artist With Two Hanged Women (1924) hints at the trend of Lustmord (sexually-motivated murder), eliciting discomfort through the suggestion of fetishism and sexual violence. 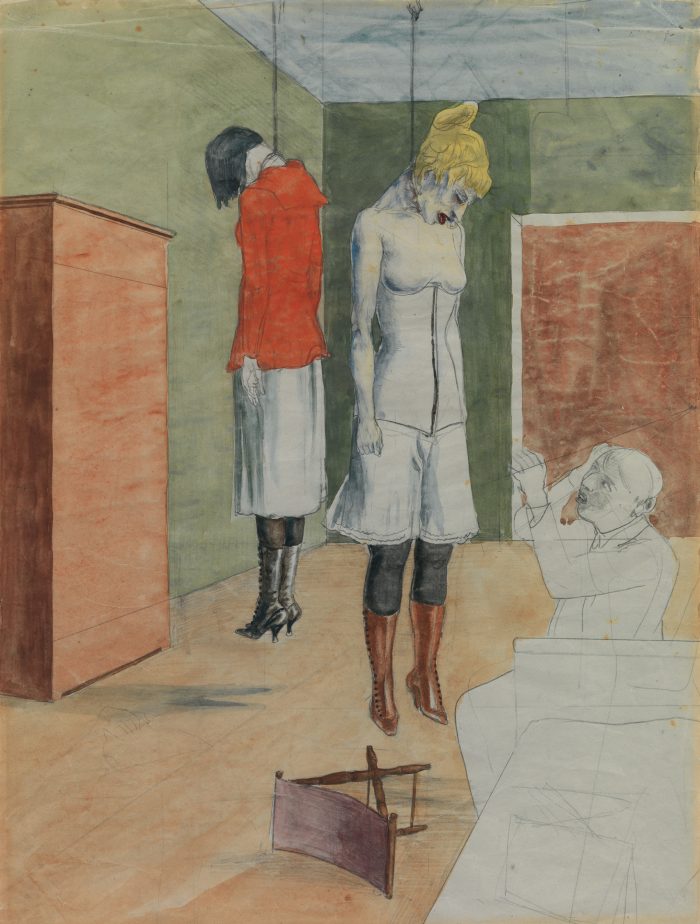 Nevertheless, although many of the women on display are brought to us through the male gaze, Jeanne Mammen is a notable exception. While Mammen’s work complicates entrenched perceptions of femininity and celebrates female solidarity and power in the new age, she is careful to remain realistic and alert to inequalities that had not yet been dissolved. It is a shame that she is one of only two female artists exhibited here; female stories are, rather tellingly, shown to us almost exclusively through male eyes. Despite the emphasis on realistic interpretations, this is a reality whose implications remain relatively unacknowledged here, implications with which we continue to struggle in modern art. 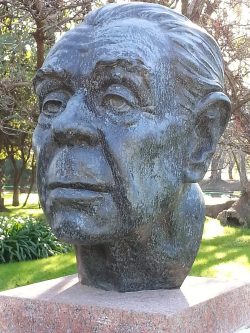 As critic Matthew Gale notes, Weimar art retains its magic partly due to the fact that we, looking at it retrospectively, know what was to come; the collapse of culture through “banning and burning, sacking and persecuting, exiling, imprisoning or executing”. As our historical distance increases, the past comes to occupy a somehow uniform and timeless space, a sort of ‘other world’. The magic of this art helps to ground us in both past and present, and thereby indicate what the future might hold. The key to understanding the legacy and meaning of magic realism, therefore, is looking at how the ideas shaping it have been constantly shifting and transforming over time. While the Tate collection suggests that Weimar art sees the real as itself magical, the appropriation of the concept by Latin American literary circles in the early 1940s arguably reverted this completely, by presenting the magical in such a matter-of-fact way that it seemed real. In the works of Alejo Carpentier, Gabriel García Márquez and Jorge Luis Borges among others, realismo mágico was used to characterise a more lyrical mode in which absurd happenings, from levitation to five-year rainstorms, are uncannily presented as banal, or at the very least quotidian, while commonplace technological concepts of modern society are treated as absurd, even apocalyptic. In a world of social and political chaos, a world devastated by two world wars, reality had to be radically reconceptualised – absurdity was one way to come to terms with the scale of global damage.

Of course, it is this relationship between our historical moment and those of Weimar Germany or post-war Latin America that draws out the immanent and continuing relevance of magical realism today. Though we may not hold the world wars in living memory, we still understand acutely the inequality, injustice and hierarchies that structure our socio-political landscapes. The theme of sexual violence that runs through much of the art on display here, for instance, has been taken up and further dissected by artists more recently; Jenny Holzer’s 1993-4 collection entitled Lustmord is a direct allusion to her Weimar counterparts. Comprised of short excerpts of her intensely emotive poems written on various mediums such as ink tattoos, LED signs and engraved rings set in bone, Lustmord was Holzer’s artistic response to the brutal and systematic “gang rapes, forced impregnation and sexual slavery” that women were forced to endure during the Bosnian War. Today, in the age of such movements as #MeToo, we have been led to once again rethink the way we view art: critical response, not just to narrative but to the way in which we receive narrative, is essential for social progress.

Acting as an umbrella term for a wide variety of different approaches, magical realism remains, in artistic circles, an intangible and shadowy idea; the main tenets that seem to anchor it are still hotly debated. The blur between the natural and supernatural has remained a magnetic preoccupation in both fine art and literature, from Bhupen Khakhar to Diego Rivera, Toni Morrison to Salman Rushdie. Overshadowed as we are in the modern world by ontological insecurity, this art helps us to navigate the tension between our sense of wonder and magic and the gritty realism of our current experience and being.

Alpana is a 4th year English student, recently returned from her Erasmus year in Berlin, where she was able to explore her love for late European art.