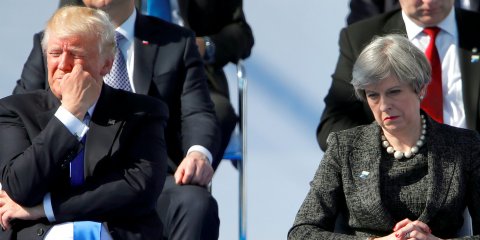 President Trump experienced his first official ‘working’ trip to the United Kingdom since his inauguration in 2017. Huge crowds gathered around Westminster in anticipation of his arrival, but much to his misery, he was welcomed by big ‘Baby Trump’ instead! This supposed “witch hunt” to oppose President Trump’s visit raised the question of the United Kingdom’s diplomatic relations with the United States and whether this relationship trumps basic human integrity.

Brexit has been on the political agenda for more than a year now, and amid his chaotic visit, Prime Minster May and her cabinet had just released their Brexit White Paper – outlining the UK’s plans for post Brexit negotiations. President Trump had a lot to say with regards to the Brexit deal – much of which he retracted by the end of his visit. He may not have gotten the ‘bigly’ reception he wanted, but he did manage to leave a big impression on the country. Not only was he able to insult the Mayor of London, Prime Minister Theresa May and the Queen in his brief visit, but he was also able to enjoy a quick round of golf at his Scottish resort in between! A noteworthy positive from the visit was the eventual assurance that a trade agreement would be “absolutely possible,” which considering the turmoil within British politics, was the closest Mrs May would get to any ‘strong or stable’ position for the UK post Brexit!

It should also be noted that President Trump takes an interesting view on diplomacy. Unlike other US presidents, he does not believe in formalities and will hold unprecedented meetings with world leaders that no other president before him would have – take his summit with Kim Jung Un, or his unaccompanied meeting with Vladimir Putin in Helsinki. He is a man who acts on impulse, which creates concern for the rest of the world. This is a man who criticises his allies and praises adversaries who the US would traditionally oppose. Trump’s diplomacy is altering the very foundations of international relations and is deeply changing America’s image in the rest of the world as a result. Former US security adviser Henry Kissinger stated that “a country that demands moral perfection in its foreign policy will achieve neither perfection nor security.” The cynical truth is that after the EU, the US is the UK’s largest trading partner – so maintaining a strong relationship is vital to our economy. But, it is tough to respect a relationship with a country whose leader makes being respected so difficult!

Yet by proverbially laying out a red carpeted state visit for President Trump, are we saying that we acknowledge his faults and will look the other way for the sake of diplomatic ties?

For our country to still preserve our morals – and not fall into the cynical views expressed by Kissinger – Mayor Sadiq Khan permitted both pro and anti-Trump protests. These protests enables the British public to stand against a man who has notoriously been called a racist, misogynistic and ignorant. Yet, it also enables the British public to conserve the ‘special relationship’ between the US and the UK. His predecessors have endeavoured to maintain a relationship with British Prime Ministers before Mrs May, and there is no doubt that the diplomatic relationship between our two countries will endure long after. 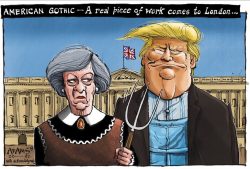 Indeed, America is a country who has intervened in almost all of the world’s largest conflicts in modern times. Thus, it comes as no surprise that President Trump offered Mrs May some words of advice before he left with regards to the Brexit deal. America is the Stan Lee of the political world: you may not always see them, but they will always make a cameo in every country’s problems. This illusion of power and it being a model to the rest of the world is frightening. Yet, with the evolution of Trump’s presidency and with new foreign policies such as the much-maligned travel ban, and trade barriers being erected instead of being knocked down, America’s image in the international sphere is becoming ever more precarious. For a superpower, America still ranks amongst the lowest in the developed in several international standings, from its employment and basic literacy rates, to freedom of press and equality! In light of all this, we should question how long America can remain under this illusion of being a successful model to the rest of the world. As America moves closer towards isolationism and Trump’s unique form of ‘diplomacy’ continues to hold no bounds, we must consider our ‘special relationship’ with the US. Instead of focusing on the US for trade deals, we should reflect on what we want this country to be in the next few decades. Perhaps to make Brexit ‘great again,’ we may want to consider a future where we don’t have to question our integrity. A future where we aren’t dependent on one country, or a bloc of countries, for our economic prosperity. Is this not what Brexit should be: an independent, strong and stable Britain?