Against the Rat Race – The UCU Strike, Neoliberalism and Solidarity Today

The UCU strikes are now underway as members of staff head to the picket lines. Dan Smitherman discusses why strikes are such a taboo subject in a neoliberal vocabulary, and how solidarity can redefine and restore faith in union action. 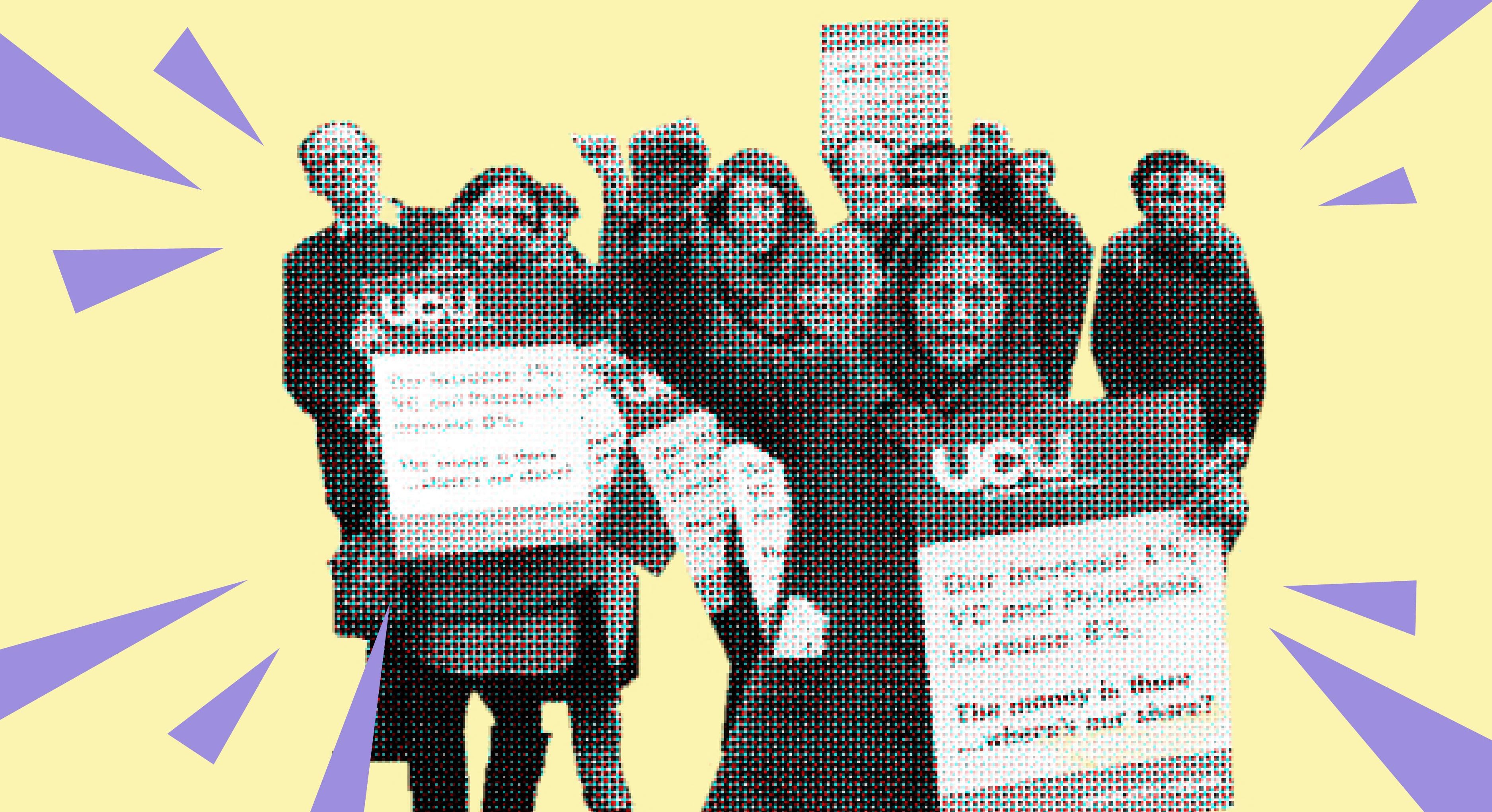 The winning mandate of the Strike Supporting motion at our All Student Meeting could be taken as a sign strikes are back in fashion. Unfortunately, we would be naïve to think so. It may well be the case that 944 to 273 students voted to have the SU support the fight over pensions, but only 1270 out of a body of maybe 15,000 students eligible to vote actually had to motivation to take part. I state this to remind us that this was no survey of opinion. So many seminars, overheard chats at the Rootes queues and conversations with people I know has revolved around a general ambivalence about the need for a strike, their victimisation as paying students, and questioning the veracity of UCU’s figures. I think it prompts a discussion as to the place industrial action has lost in popular conscience in this country, and what this can tell us of our affective social bonds. This is no accident. This is an indictment of a failure to hegemonically envision the innate usefulness of unity between individuals – discredited in the mainstream as anachronistic. I think as Mark Fisher put it, we have been bought up in a common-sense of individualised realism, a ‘deflationary perspective of a depressive that believes any positive state, any hope, is a dangerous illusion’ (2009: 5), but one which cannot be presented as a totality. These debates have been occurring for years now, and will not settled in this article, or even I fear in the course of this strike. But we should not hide away from such discussions. Atomisation only lasts as long as we deny ourselves our own vulnerability we face every day, a veil that must be thrown back.

Strikes are just not a part of mainstream political discourse in this country anymore. Our very vocabulary seems to choke on the uttering of ‘picket line’ or ‘industrial action’. And no wonder. I couldn’t name you one moment throughout my British state education that any history of labour organizing was mentioned – plenty of wars, monarchs, societal transformations (many caused I would later find out through militancy) but nothing of ordinary people coming together to say enough is enough. I would not be the first, or the last, to point out this obfuscation of worker cooperation in the name of collective betterment has been an instrumental project of government after government– though most infamously with Thatcher and the New Right consensus. As Berardi puts it: ‘What had been produced by labour and social solidarity in the centuries of modernity started to fall under finance’s predatory process of de-realization’ (2015: 6) – it became the blood-stained, finger-printed weapon of the ‘enemies within’; the belligerent, feckless workers who would rather see you and I, the axiomatic consuming, hard-working citizen suffer than return to their senses. I remember first watching footage of Orgreave as a teenager and being bought to tears watching ordinary miners beaten as to this world-view they were traitors. But there’s a reason why such moments are not regular viewing; we might question why their repression was so total. It’s a similar reason to why the last time I saw a strike in popular culture was when Tommy Shelby manipulated the unwitting Union lefty loonies of Birmingham to strike so his masterful plan could unfurl on the most recent series of Peaky Blinders.  Hardly a positive depiction, but hey, strikes are to be seen as out-of-date and a waste of time.

Obviously that isn’t the end of the story. But nothing’s presented as more old-hat than unity, today. It is strange to think of the idea of solidarity, when nothing seemed more jarring throughout school than a group project, juxtaposing the steady competition of individual grade attainment at school. We struggle to understand the world outside of our own experiences. An a priori neoliberal man (Browne, 2017), remains, and I can understand why. There’s obviously something intoxicating in the language of capitalist realism, of essential individualism and the survival-of-the-fittest. For many it truly is an alien moment to have a default position of support for staff at University – their struggles aren’t mine, why are they hurting me, I paid for this, why should I care? – All these remarks are common-sense reactions for the neoliberal immune system. Even if one likes their lecturers enough to agree with the strike, the idea of supporting RMT actions, or bin-men in Birmingham still I imagine might seem a step too far. Societal atomisation seems to have won the day- the disappearance of the strike from popular conscience epitomizes a dead and buried age. You watch your back, and I’ll watch mine, and never the twain shall meet… That’s just the way of the world.

But we’d be foolish to leave this un-doubted. As Hall said way back in 1987 – ‘They think we are dinosaurs. They think we belong to another era’ (1988: 172) – and maybe that’s right, but only within a common-sense of solidarity as unnatural. But ideology is not a unitary object. Hegemony (especially of this Thatcherite kind) is a tangential, insecure collection of interests, prone to crisis and reassertion. At every possible moment space exists to put forward new futures and possibilities of social action (with emphasis on the social). Holloway’s (2010) image of the ‘cracks’ in capitalism we must expand is a useful metaphor. So what if the old left’s ‘socialist man’ (Hall, 1988: 170), is dead? “He” is at the very least not fit to apply in our lifetimes. We need new ways to express solidarity as core reflection of humanity, against vulnerability and for individual realisation within such a project, that doesn’t fall to cliché and easy discrediting.

One thing that can unite us all is precarity: from increased deadlines to tuition fee and rent increases to the collapse of guaranteed work and security thereof after we get through this mire –this shouldn’t be ducked. Our academic staff exists within this continuum of discomfort, behind that thin veil that tells us students are “consumers”, supposedly owed something from them in particular. No. We are in this mess because of managements and government agencies, forming a powerful bloc of calculated ambivalence, not our teaching faculty who have seen pay and insurance dissipate in front of their eyes as they try to keep education an empowering cause. It’s the calculated ambivalent practitioners that sit, loving every needless anti-strike motion at ASM that gets proposed; every moment someone would rather write a complaint letter to their sessional tutor than pass them a coffee on the picket line; every time someone says, “I support the idea of the strike, but…”. Individualism and the death of solidarity is a farce; a pyrrhic victory for marketized interests that has led only to an expansion of a unifying precarity for us all. Let’s not forget that we can still resist this at every turn. As WAC state, for pensions today, against precarity tomorrow.

To be open about this de facto unity in an engaging and natural way is crucial. This is an opportunity to carve a new, accessible and common-sense vision of the strike and social commonality for the supposedly untouchable middle-class generation of the hour. From the campus to the office and beyond, let’s engage with each other once more as one, and ‘humankind to recognize itself again’ (Berardi, 2015: 7). Let us not shy away from our a priori vulnerability as the first true generation of neoliberals. This is truly the defining feature of the present and future for the vast majority of us. Those who seek to help us get through this, our hard-working over-stretched staff, need us to see this through, and if we get the message right more will be able to lend a hand. Solidarity wasn’t just for “ye olde socialist man”, it’s for us all.

As Jimmy Reid, famed Glaswegian Trade Unionist, stated on his appointment as Rector of Glasgow University by students in solidarity with the 1971 Shipbuilders Work-In in response to the anti-direct action individualism peddled then –

‘Reject the values and false morality that underlie these attitudes. A rat race is for rats. We’re not rats. We’re human beings. Reject the insidious pressures in society that would blunt your critical faculties to all that is happening around you that would caution silence in the face of injustice lest you jeopardise your chances of promotion and self-advancement.’