Artist and Empire at the Tate Britain: A Sanitised Exploration of Britain’s Imperial Past

Holly Winter reviews the Tate Britain’s recent exhibition Artist and Empire: Facing Britain’s Imperial Past, arguing that it fails to address the most troubling aspects of our history 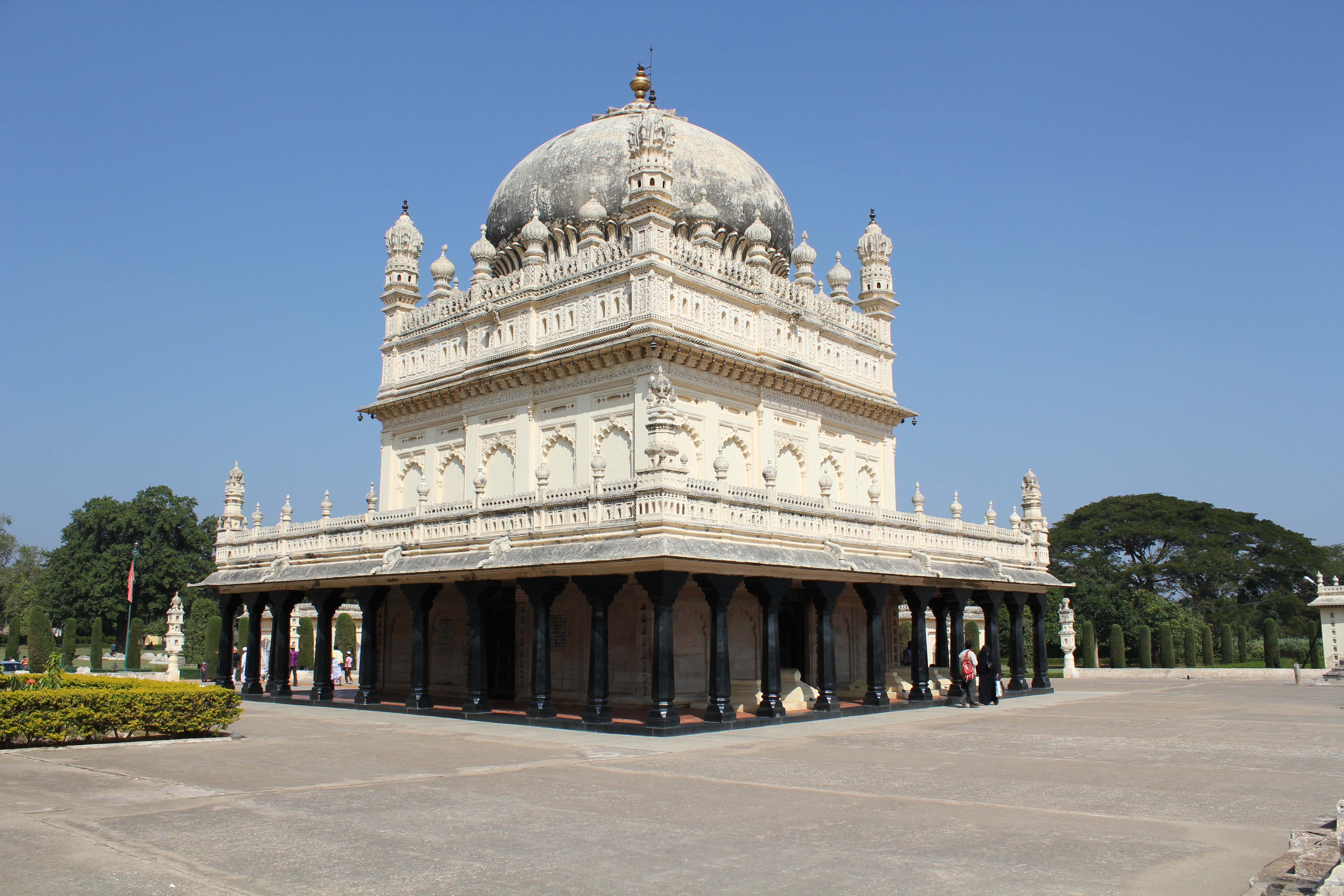 The Mausoleum of Tipu Sultan. Tipu Sultan was the ruler of Mysore, and was killed by British forces during the 1799 Siege of Seringapatam. His palaces were looted and thousands of objects taken as ‘prize’. Many of these objects remain in British museums. Image: Arian Zwegers

In recent decades, museums have come to be seen as political entities. More and more research has foregrounded the power dynamics that dictate their exhibitions, collections, space and architecture, and with it the consequences of these dynamics for various social groups and contemporary politics. The ‘poor memory’ that British museums have in relation to colonialism has been viewed as increasingly problematic, and a number of temporary exhibitions at institutions like the Victoria and Albert Museum, the National Museum of Scotland and the National Portrait Gallery have, as a result, sought to engage more fully with the colonial histories that irrevocably shape our museums.

The Tate Britain’s exhibition Artist and Empire: Facing Britain’s Imperial Past is the latest exhibition to give an “unfamiliar imperial twist to artefacts and objects better known in other contexts.”[i]

Through six themed galleries, maps, flags, paintings, photographs and artefacts from collections across Britain are drawn together in what has been billed as a  “provocative” engagement with British imperialism and its legacies.

However, the exhibition, which has been described as “awe inspiring” and “exciting” in Jonathan Jones’ enthusiastic Guardian review,[ii] is far from the promised radical departure from conventional representations of empire. Rather, it is predictable and uninspiring, and provides few new insights into the legacies of British colonialism. As The Telegraph reviewer Mark Hudson puts it, the exhibition is little more than a “static, stuffy, old world display”.[iii]

As the exhibition draws to its close, it can therefore either be seen as an overwhelming success, or, at worst, slightly disappointing and somewhat lacklustre. There has been hardly any anger or controversy, and certainly no protests. But after visiting the exhibition myself, this lack of anger is surprising. Artists and Empire is more than a missed opportunity to be sighed over by historians of imperialism – it is an exhibition that pays lip service to addressing Britain’s imperial past while skirting round more the more unpalatable elements of those histories. Rather than confronting it, it sustains and contributes to sanitised histories of empire, and allows a dangerous sense of nostalgia to creep into public memory.

This whitewashing of imperial history can be identified in various points throughout the exhibition, but is best exemplified by the room titled ‘Trophies of Empire’. 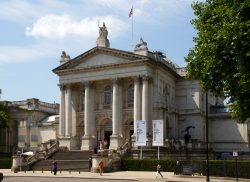 There is certainly a plethora of material available for such a gallery. Britain’s museums are filled with the spoils of colonialism. Museums like the V&A hold large amounts of weaponry, jewellery, textiles, ceramics and furniture that were obtained through nefarious means. Richly jewelled filials from deposed rulers’ thrones sit alongside telescopes, books and pocket watches in British museums, all of which were taken as symbols of British dominance, and today testify to the imperial arrogance and, crucially, the violence, which underpinned colonial rule.

The ‘Trophies of Empire’ gallery, however, does not engage with the histories of violently appropriated objects. Instead, it focuses on the rather more sedate practice of imperial collecting. Botanical sketches document the collection of exotic plants and animals during the age of exploration, while Sanskrit texts, paintings and photographs demonstrate the British fascination with Indian culture – and the desire to ‘possess’ it. The only evidence of the prolific looting that was a key part of the British imperial conquests is a pair of bronze miniature busts, captured from Benin in West Africa, displayed at the back of the room.

Given the subtitle of the exhibition is ‘Facing Britain’s Imperial Past’, this is a woefully inadequate engagement with the material greed of British colonial conquest. To have a room called ‘Trophies of Empire’, and dedicate only a tiny proportion of it to objects that were seized to memorialize colonial conquest, implies to visitors that the main ‘trophies’ with which Britons returned to England were plant drawings and photograph albums, rather than immense financial and material wealth. The histories of plunder and violence, which the exhibition claims to confront, are therefore peculiarly erased.

The problem is not with the broad definition of ‘trophies’ that curator Alison Smith adopted for the gallery. By highlighting the politics behind imperial collecting, this conception of trophies has the potential to indicate the important ideological work that seemingly benign imperial acquisitions did. Rather, the problem lies in the fact the gallery privileges, to a baffling extent, the ‘softer’ trophies of empire. If there were a broader public awareness of the histories of colonial looting and plunder, this would be a useful exploration of what we consider to be trophies of empire. However, given the scant public awareness surrounding of the very existence of looted or violently appropriated objects in British museums, the gallery presents a distorted vision of empire trophies. 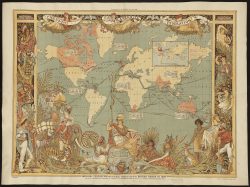 Imperial Federation Map of the World Showing the Extent of the British Empire in 1886. This elaborately decorated world map glorifies the late-nineteenth century British Empire. Maps were arguably another form of ‘empire trophy’ for the British. Image: Boston Public Library

This is made even more problematic by the fact that the broad definition of ‘trophies of empire’ is unevenly applied to privilege more benign narratives. As the gallery extends the definition to botanical drawings, you might expect the definition to be similarly expanded to incorporate more difficult and troubling art and material culture.  For example, in the next room, ‘Imperial Heroics’, there is a painting of Marquis Cornwallis taking the sons of the Muslim ruler of Mysore, Tipu Sultan, hostage in the Third Anglo-Mysore War. Would that painting not have been better placed in the ‘Trophies of Empire’ room, in order to emphasise that the British also took people as symbols of their supremacy? Is it not a similar case for the photos of Indian rebels hanging as punishment for their role in the Indian Mutiny (1857-8)? Or the skulls of murdered Africans that were turned into desk ornaments?

The fact that the ‘Trophies of Empire’ gallery only fleetingly addresses looted objects, and doesn’t include more difficult art forms in its broad definition, makes it difficult to conclude anything other than that the exhibition succumbs to the general tendency to evade the more troubling aspects of our colonial past, presenting a more palatable history for public consumption.

In the context of growing repatriation claims, and movements like ‘Rhodes Must Fall’ demanding public discussions about the legacies of imperialism, a gallery prominently displaying artefacts that were taken to materialize colonial power relations would have been a striking and daring move, forcing us to address uncomfortable questions about the acquisition and retention of these items. At the very least, it would have helped improve public awareness of the violent biographies of many of the objects in our museums. Instead, issues surrounding the appropriation of objects are relegated to two pieces of postcolonial artwork in the final gallery. These easy-to-miss works are poor, uncontroversial substitutes for a more direct engagement with imperial loot.

Britain’s imperial history is a deeply disturbing one involving expropriation and exploitation, relations of domination and subordination, and multiple racisms. The historical narrative put forward by the ‘Trophies of Empire’ gallery sidesteps and sanitizes these more troubling histories; something that is true of the exhibition more broadly. There is, for example, only one representation of African-American slavery, despite the significant role of art that illustrated racial violence in the campaign to outlaw the slave trade in the late eighteenth century.

What we remember and how we remember is crucial to contemporary politics and identities. Exhibitions like Artist and Empire have the potential to shape public memory and inform our collective sense of self. If the violence of our colonial past continues to be eschewed, contemporary imperial mentalities are likely to persist, contributing to further injustices.

Holly Winter is a first year History PhD student. Her doctoral research focuses on the role of material culture in the construction of imperial masculinities. Both her undergraduate and masters dissertations focused on war trophies from colonial India.

[ii] Jonathan Jones, ‘Artist and Empire Review- a captivating look at the colonial times we still live in’, (23/11/2015) http://www.theguardian.com/artanddesign/2015/nov/23/artist-and-empire-review-tate-britain