Our Slow Motion Suicide: Why it’s Time to be Scared About Climate Change

Our Managing Editor, Tom Harrison, looks at the current state of our atmosphere and why it should terrify us.

I have been following the science of climate change quite closely for many years and in the last few years something important has left the discourse:

When I was in primary school I remember reading in a textbook that amount of CO2 in the atmosphere was 360 parts per million (ppm). When my parents were in school that number would be 330 ppm. For the thousands of years before industrialisation that number would have been 280 ppm.

This year that number has already risen by a further 4 ppm.

This already alarming rise in CO2 is compounded by significant rises in other greenhouse gases. Methane is around 32 times as potent as CO2 so the 125% rise from preindustrial levels translates to the equivalent of another 32 ppm of CO2, a number that is rising rapidly, as we increase our dependence on natural gas and melting permafrost releases gases trapped since before the last ice age. Increased nitrous oxide levels, caused by inefficient engines and industrial agriculture, not only add the equivalent of a further 16 ppm of CO2 but cause destructive acid rain and choking smog in our cities.In spite of the great successes of the Montreal protocol, humans have released relatively small yet incredibly destructive quantities of fluorinated gases. These do not exist naturally but are synthesised for use in refrigeration, aerosols and firefighting, tens of thousands of times as potent as CO2 and almost impossible to remove from the atmosphere, these add the equivalent of another 12 ppm of CO2.

In the last 250 years, and mostly since 1950, we have effectively increased atmospheric greenhouse gase concentrations from 300 ppm to 460 ppm of CO2 equivalent, an increase of over 50%.

Now consider these three facts:
1. The greenhouse effect operates on characteristic timescales of 300 years, and has the effect of raising global temperatures by 30oC.
2. A 80 ppm change in atmospheric CO2 is the difference between our climate today and the last ice age, we are now at double that.
3. Global greenhouse gas concentrations have changed more in the last 100 years than in the preceding 2,500,000 years, 500,000 years before humans even evolved.

We are probably already too late to salvage the continuation of life on earth, but we must try.

The glaciers of the world are receding by an average of 0.6m per year, faster than in any period in the geological record.

There has been a 17cm rise in global sea levels since the beginning of the last century and a 7cm rise since the turn of the millennium.

In the last 50 years, one eighth of global agricultural land, 1.8 million km2, has been turned to desert.

These aren’t even the canaries in the coal mine anymore. These are miners falling dead, but everyone else is continuing to cut coal.

Even the most optimistic scientists are now looking at ways we can keep global temperature rises below 2oC, and their solution is increasingly to shut the whole thing down. Now.

Shut down industry, transport, agriculture, even reproduction. We have missed the chance to do this painlessly, now we have a stark choice: economic growth or existence.

A 2oC rise may not sound like much, hardly the addition of a jumper, but on a global scale it would be unprecedented in human history. It leaves this as the best case scenario for the end of the century:

The glaciers which provide two billion people with their fresh water, will, in the next 50 years, recede to nothing.

Rising sea levels will make the homes of a billion people uninhabitable.

Land that feeds hundreds of millions will turn to desert.

A voyage across the Styx on a march into Hades.

That is the best case scenario.

Not in the far distant future but in the next century, in our lifetimes. Most people reading this will still be alive to see the cataclysm unfold. 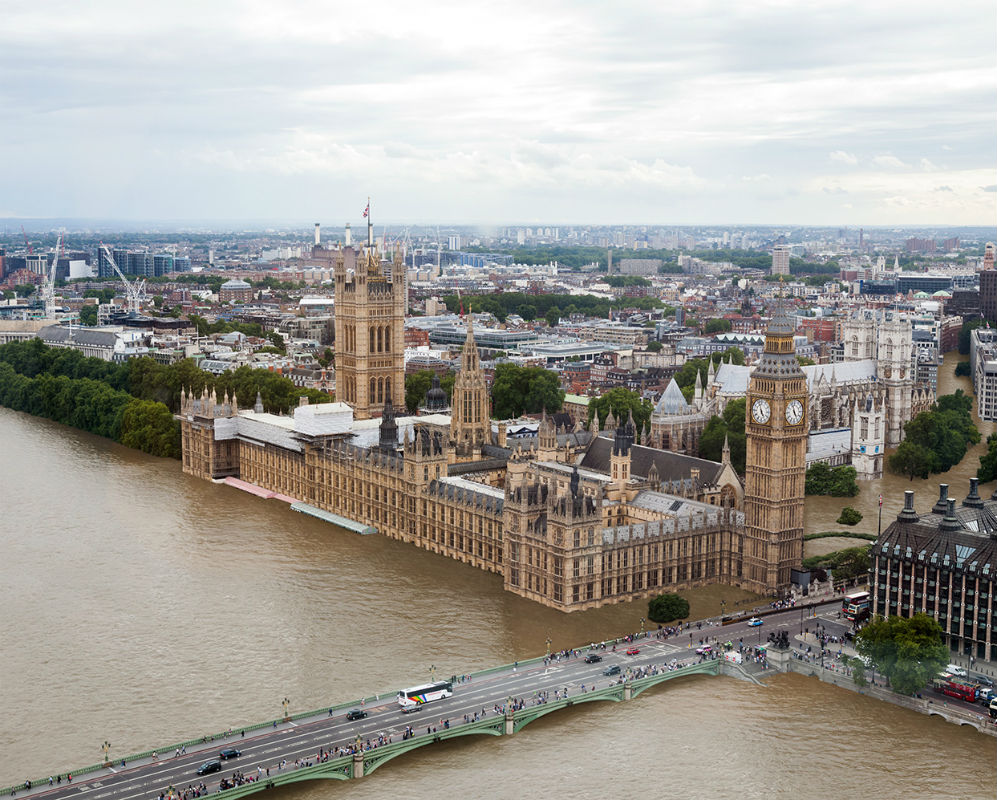 London, 2100, in the best-case scenario of 2oC of warming. [Esther Mucientes, El Mundo]

More honest models predict a 4oC, 12oC or even 50oC rise, and that really is game over, we start a spiral we can never survive. The seas will become wastelands, rising over the land and eventually starting to boil. The permafrost will melt releasing more methane than any atmosphere could absorb, driving a chain reaction that warms the earth further, leading an atmosphere that is horribly carcinogenic and eventually to an atmosphere so flammable that it regularly spontaneously combusts, causing fires so intense that they will burn any life above the earth’s surface and consume so much oxygen that anything below will suffocate. In short, in less than 200 years, our planet will become barren and lifeless, unrecognisable from the green and pleasant land in the pictures sent by Apollo. On our current trajectory, this is where we are headed. Even if we do something and it’s not enough, this is where we are heading. The end of our species and all others.

Rowing back to the land of the living will be humanity’s greatest labour.

How did we let it get this bad?

Well, we can’t plead ignorance. The link between atmospheric greenhouse gases and climate change was first identified in 1859 and an anthropogenic effect has been observed since the 1930s. It wasn’t until 1972 the United Nations convened the world’s diplomats to tackle it, but the conference produced only words. Nothing was binding, so nothing was done, a theme you will notice as we go on.

It wasn’t until 1992 that the Rio Earth Summit finally produced the barest hint of international legislation, to minimise desertification and maintain biodiversity. They established the polluter pays principle, stating that emitters are responsible for cleaning up their own mess and after much wrangling, they negotiated a framework to tackle the multifaceted and complex problem of reducing greenhouse gases. But despite the world powers converging 22 times, they have failed to even approach what is required, producing only the failed Kyoto protocol and the much lauded but ultimately meaningless Paris agreement.

“the Paris agreement is the opening paragraph of a treaty that long needed to be written, signed and enforced”

The Paris agreement sought to overcome the key failure of Kyoto; non-compliance by largest polluters. The US’ emissions are so large that they and China produce more than 40% of the world’s CO2, any treaty without their support is dead before it even starts. To ensure that they signed the Paris agreement says nothing. It commits us to measuring emissions on a country by country basis, which we already do, and codifies the orthodoxy that we need to restrict global temperature rise to 2oC, but there is no mention of how that might be achieved, let alone any binding targets on emissions. It even dances around explicitly calling climate change anthropogenic in a desperate attempt to be ratified by a Republican Congress in the deepest, most dangerous denial.

To give a sporting analogy, it agrees that we should keep score and that we should have goal posts, but not where they should be or what form they take. Either way the game should have taken place 50 years ago. The Paris agreement is the opening paragraph of a treaty that long needed to be written, signed and enforced.

We don’t just need to stop increasing emissions, or reduce them from current levels; our task is to reduce atmospheric greenhouse gas concentrations, we require negative emissions over the next century.

This is complicated by the fact greenhouse emissions are deeply entrenched in our lives. Not all emissions are anthropogenic and not all emissions come from burning of fossil fuels; 9% comes from agricultural land use, 9% from chemical production, 7% from cement production, 5% from steel making and 4% from waste management. These are chemical or biological processes which inherently produce greenhouse gases and, whilst some savings can be made, they are almost vanishingly small.

Just to make things a little more difficult the Rio diplomats agreed, with a little help from lobbyists, that emissions from aviation, a further 6% of the total, are exempt. So already 40% of today’s global CO2 emissions are essentially fixed and humanity’s greatest labour just got harder. Any reduction has to come from the remaining 60%, primarily from electricity generation and transport. To even achieve that hellish best case scenario of a 2oC rise we need these emissions to be zero by 2055. Before I am even retired.

This global catastrophe is no longer some abstract future, it is our future.

We have 35 years to change everything, otherwise everything will change, and we won’t be able to stop it. We need to start building the infrastructure today so we might live tomorrow and the bad news is, we aren’t. We can’t get to 2030 and start building the electric cars, solar panels and nuclear power stations we need to reach the two-degree target, there just won’t be time. We need to do this now to prevent the end of our species and all others.

In our lifetimes we have to change our socio-economic system to one compatible with one earth, because scientists have spent decades searching for a planet that could support life, and in the vast universe they’ve only ever found one, the one they were stood on. We need leaders with the vision and bravery to stand up and do what is needed to save it, otherwise, that one beacon of life could snuff its self out within our lifetime.

In 1987 the UN published Our Common Future laying out the endeavours required for sustainable development. It closed with a statement of which we did not take heed.

“We are unanimous in our conviction that the security, well-being, and very survival of the planet depend on such changes, now.”

Thirty years of inaction later, the changes we need to make are much more severe, but the security, well-being, and very survival of the planet still depend on such changes. Now.

Tom Harrison, our Managing Editor, is a fourth year studying Automotive Engineering with Sustainability. You can find more of his articles in the Science and Technology section.