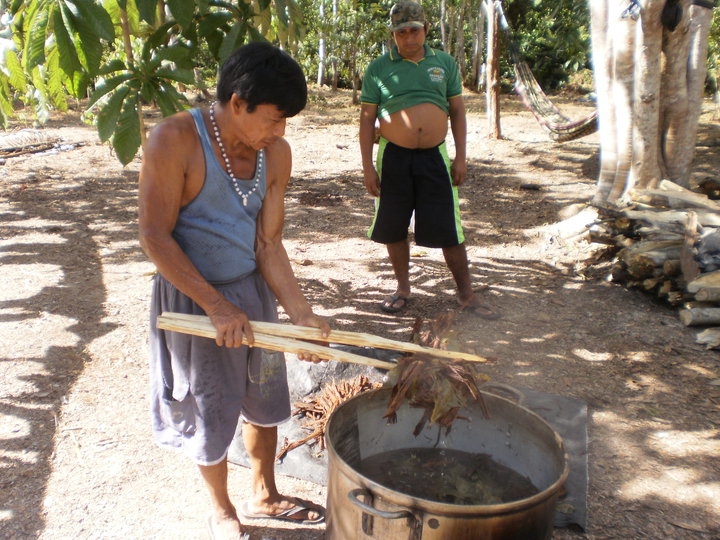 Yagé, or Ayahuasca, is the name of a plant used by many indigenous tribes of the Amazon area– such as the Urarina, Chayavita and Huambisa peoples – in South America, for sacred rites. It is usually made into a concoction that is consumed during special spiritual ceremonies intended on healing participants; users have left the experience with feelings of purpose and, in some cases, ayahuasca has been used to treat trauma and drug addiction. Ayahuasca induces such spiritual effects because it contains the hallucinogenic drug dimethyltryptamine (DMT). Ayahuasca is therefore illegal in the U.K, the U.S and many other countries from which tourists come. In 2008 Peru’s government recognised ayahuasca’s cultural status describing it as “one of the basic pillars of the identity of the Amazon peoples”.

After ingestion, ayahuasca produces feelings ranging from fear to elation in users. Ceremonies are guided by experienced spiritual shamans whose intention is to help the user go through deep introspection on a spiritual level. Ayahuasca use is aligned with notions of purification and purging. As a medicinal brew, ayahuasca can rid the body of tropical parasites found in Amazonia. Furthermore, those preparing for ceremonies traditionally eat a restricted diet, abstaining from foods that are too spicy, or foods with large amounts of fat, salt, or citric acid. During the ceremony ayahuasca usually induces vomiting which aids in expelling parasites.

Interest in its mystical healing ability and the purported enlightenment it brings has spurred the rise of Ayahuasca tourism, with select companies such as ‘Ayahuasca International’ offering to facilitate the ceremony and organise journeys to South America for ‘authentic experiences’. Underlying this poorly regulated industry, it seems, lies something more sinister. Inexperienced practitioners and those completely outside of the indigenous tradition have exploited tourists leading to fraud, intimidation, sexual abuse and death. Ayahuasca has cardiovascular effects as well as being able to trigger latent of undiagnosed mental illness and should only be used by someone incredibly experienced, raised in the native tradition. Speaking to the Guardian, Omar Gomez from the Rainforest Healing Center says that they require an ‘intense screening process,’ and they end up turning away 60% of potential visitors either due to them having problems that do not mix with ayahuasca or not being sufficiently serious about their ‘intention and desire to heal.’

In January of this year, I expressed an interest in attending one of these retreats in Berlin. I posted on a now deleted Facebook page operated by Ayahuasca International, and received a private message linking me to a blogpost concerning the behaviour of Alberto Varela, the President of Ayahuasca International. The blog was written by a former ‘patient’ of Varela –  referred to as ‘A.M’ – who had participated in his Ayahuasca practices for over a year. A.M wrote of the highly unprofessional nature of the ritual, with Varela’s family members being free to walk in and out of the room that it was being performed in. According to A.M, Varela became increasingly manipulative and violent, asking the author to masturbate in front of him and aggressively suggesting promiscuity as a spiritual healing device.

The author details the immense mental pressure she felt whilst involved with Varela’s practice, even going as far as to say: “I was tempted to crash my car, I wanted to kill myself. I was desperate, literally helpless. I just cried and cried wondering what to do and where to go.”

At one point, A.M was persuaded to travel to Colombia for a more authentic experience. After being coerced into putting down a 650 euro deposit with Varela, she was convinced by a singing teacher, supposedly a friend of Varela’s, not to travel to Colombia. After seeing A.M break down in singing class, the teacher told her about his own criticisms of Varela’s “unethical practices”. A.M was then able to wrench herself free of the practice. She received a refund for the Colombia ticket from the airline only after presenting evidence of her traumatic experience with Varela. To her dismay, Varela refused to reimburse A.M for the money she had given him to reserve the Colombian Ayahuasca experience. She notes that “this was the last time he answered my phone calls. He disappeared, as if swallowed by the earth.”

A.M’s story is a particularly unsettling portrayal of the behaviour of Alberto Varela, and was my entry point into the horrors of Ayahuasca tourism. Varela’s organisation, Ayahuasca International, has been publicly denounced in a letter written by representatives of the Cofán people and signed by over 100 academics, including anthropologists, doctors, and experts on indigenous peoples. Varela claims to have received permission to carry out Ayahuasca practices by the highest traditional authority of the Cofán people, Taita Querubin Queta Alvarado. The letter states otherwise:

“Mister Alberto José Varela has NEVER been given any instructions or training in the knowledge of the Sacred Medicine of Yage, neither has he ever been authorised to carry it or use it in his international tour. This makes what is said in his alleged ‘authorisation’ absolutely false.”

Despite this condemnation and the judicial action launched against him, Ayahuasca International still has numerous Facebook pages and an active, if severely misleading, website. Speaking with people who have undergone ceremonies with Ayahuasca English – a subsidiary bearing the same branding on Facebook – I was told that these events were carried out with extremely poor taste by rude and inexperienced practitioners. One participant, who wishes to remain anonymous, recalls the sense that “the operation seems to be one massive money making exercise”. They were accused in the middle of a session of not wanting to pay for the ceremony – one even had his head grabbed by a practitioner during a disagreement. Another participant, who also prefers not to be named, describes the retreat as a “total shambles”:

“We were taken straight from a plane into a car with a man who didn’t speak a word of English. We drove for an hour and a half in the dark and no clue where we were going. Then we arrived at an old run down mental hospital on top of a mountain and carted straight into a dark room with about 30 other people already off their faces on ayahuasca. It was terrifying.”

The vague, nebulous nature of the numerous social media pages leading back to Ayahuasca International makes investigating its hidden dark side a challenge. Its leader, Alberto Varela, mysteriously disappeared from the internet after December 2015. Ayahuasca English operates out of Madrid and those I spoke to have urged me never to use its services. The company still advertises regularly to the 35,000 people who have liked the page on Facebook. Ayahuasca, despite being touted as a wonderful, healing spiritual plant, has had a dishonourable, unscrupulous tourism industry grow up around it, something which appears to have resulted in fraud, sexual abuse and mental trauma.

Michael Haddad is a fourth year English Literature Student. He is a member of Warwick for Free Education.