Joe Rosettenstein reacts to the most devastating mass coral bleaching ever to strike the Great Barrier Reef. 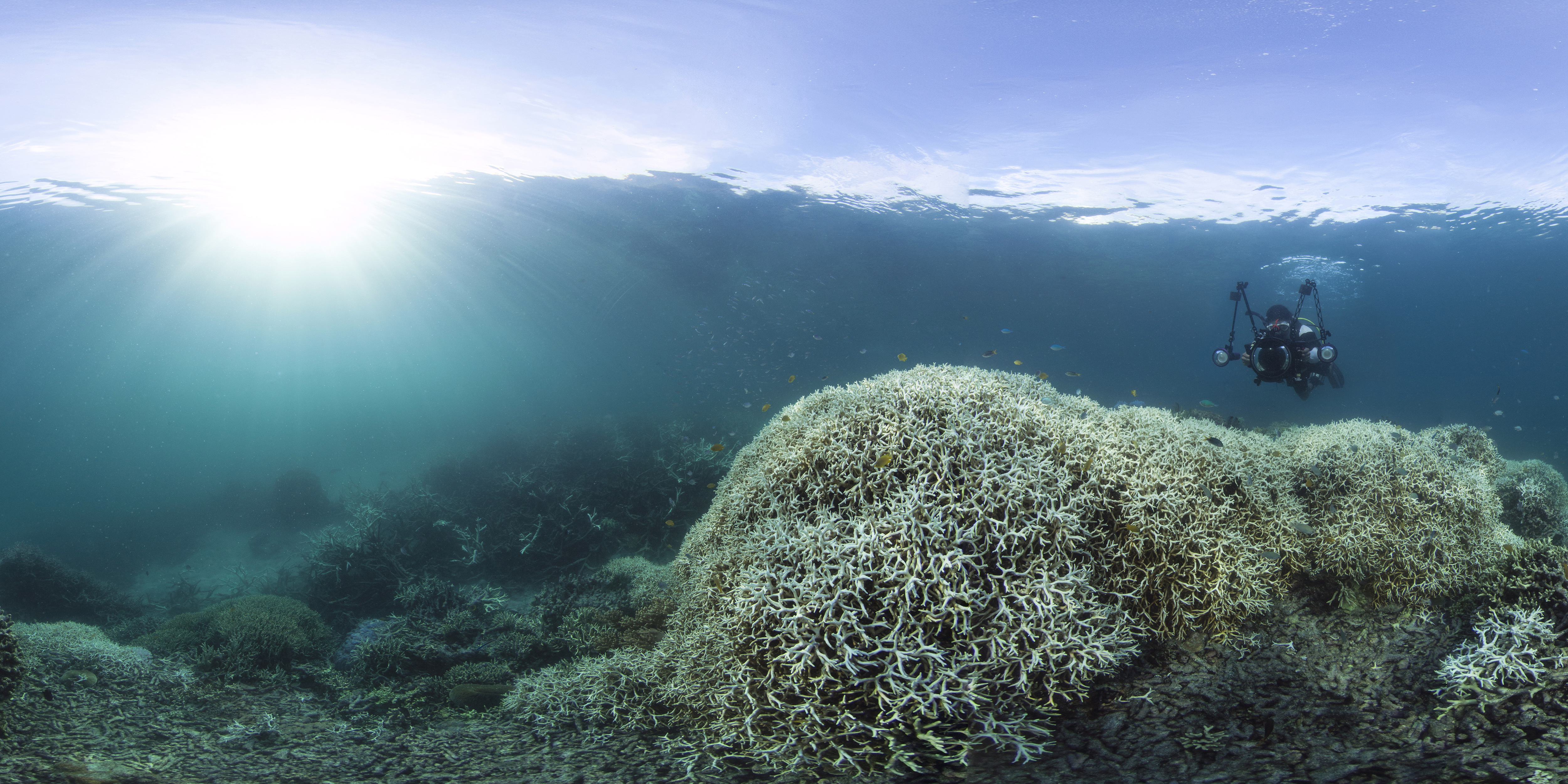 We might have just lost one third of the Great Barrier Reef.

93% of reefs on the Great Barrier Reef have been struck by coral bleaching. In the North, 81% are severely bleached, and mortality rates are already at 50%, expected to rise to up to 90% on some reefs.1 This is on top of a 50% loss of reef in the last three decades.2

We are witnessing the death of the most beautiful of nature’s manifestations, elegant in its complexity and breathtaking in its vitality. Such is the magnitude of the tragedy that I feel almost compelled to look away, and spare myself the pain and the guilt of my own compliance with the processes that forced us down a path to this catastrophe.

Over the years, the level of alarm regarding the destruction of our reefs has steadily increased, while estimates for their remaining lifetime have decreased. It’s not like there weren’t plenty of early warnings; Hawaiian and Caribbean corals had already been severely affected. The 2010 mass bleaching event was triggered by a strong El Niño, and we’ve just experienced the strongest El Niño on record. Even so, it always felt like a distant threat; although I had made plans to see the reef before it’s time was up, it never seriously occurred to me that I could miss my chance.

“I have cried. I have broken down in front of cameras. This is the most devastating, gut-wrenching fuck up.”

Researchers are mourning the loss of the treasures that they have devoted their lives to studying. Professor Justin Marshall of the University of Queensland, who has been diving and studying Loomis Reef for 30 years, is clear about the impact of this bleaching event: “Loomis Reef was an amazingly diverse, beautiful little reef about 500 metres long – covered in lots of different coral. Now it’s going to be a big ball of slime… I have cried. I have broken down in front of cameras. This is the most devastating, gut-wrenching fuck up.”3

Professor Terry Hughes, the director of the ARC Centre of excellence for Coral Reef Studies, tweeted this summary of the aerial survey which identified the scale of the bleaching:

I showed the results of aerial surveys of #bleaching on the #GreatBarrierReef to my students, And then we wept. pic.twitter.com/bry5cMmzdn

The south end of the reef was saved from extensive bleaching by a sheer chance – a period of cloudy weather caused by an ex-cyclone, which cooled temperatures. Next time it may not be so lucky.

Coral reefs are a fragile ecosystem. When water temperatures are above a threshold for a sustained period of time, they expel their algae (Zooxanthellae) and turn white, appearing to be bleached. This leaves them in a vulnerable state, where additional stresses can easily lead to mortality.

Bleaching and coral death also severely affects dependent species – fish and invertebrates which live and feed amongst the coral. The death of coral reefs has a knock on effect, devastating permanent coral dwellers and mobile species which come to the reefs to feed and mate, before moving up the food chain and finally killing off the apex predators, the reef sharks, which the World Wildlife Fund classifies as one of the most important species on the planet.

Some individual coral colonies which are hundreds of years old are now dying.

The evidence suggests that it was the most powerful El Niño on record that caused the scorching water temperatures fatal to corals; the climate phenomenon led to a pulse of warm water that circled the pacific before becoming trapped at the Great Barrier Reef.4 But that doesn’t mean humans aren’t responsible. Despite the susceptibility of coral reefs to bleaching from high water temperatures, the Great Barrier Reef has lasted 8000 years, pretty much since the last ice age, with El Niño events occurring several times per decade. Some individual coral colonies which are hundreds of years old are now dying.

The three most severe mass bleaching events on record have all occurred since 1998, and the cause is none other than anthropogenic climate change. Our actions are causing a rising trend in atmospheric and ocean temperatures, and this is at the root of the stronger El Niño, and the death of our coral reefs. Professor Hughes is adamant that climate change is the real culprit: “Before 1998 El Niño events didn’t cause bleaching, but now they do because they add an extra pulse of heat on top of global-warming impacts.”5 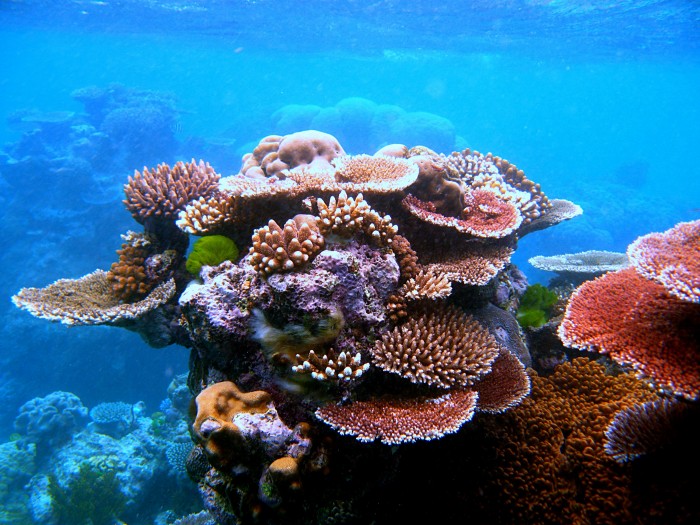 Coral outcrop on Flynn Reef in the Northern sector of the Great Barrier Reef, taken before the bleaching. Flynn reef has been badly affected by bleaching.

We are all responsible for this catastrophe, but there are some who bear a greater share of that responsibility, and who, in my opinion, need to be held to account for what could be described as criminal disregard for one of the great wonders of the world. Successive Australian governments have treated the Great Barrier Reef with negligence and outright contempt. Under a series of port expansion plans, huge swathes of the reef (including a dugong habitat protection zone) are due to be dredged to make way for large cargo ships to transport coal from new mega-mines.6 This is a double-whammy of callousness: annihilating vital, unique ecosystems in order to export coal, the burning of which has led to this calamity and will continue to wreak havoc on the few remaining reefs which survive.

…not even huge contributions to the economy can save the environment from ruination to make way for resource extraction.

The Great Barrier Reef generates 70,000 full time jobs and brings in $6 billion per year to the Australian economy,7 but still the government opts for its destruction. This baffling situation showcases the greatest evils of extractive capitalism, where not even huge contributions to the economy can save the environment from ruination to make way for resource extraction. The policy makers are locked into the narrow-minded ideology that the fires of industry are the only path to growth and progress. Furthermore, the plutocracy which defines Australian politics fosters a culture of political favours and closed-door deals (65% of the richest people in Australia had amassed their wealth via political connections rather than via innovative businesses8), resulting in abominations such as the gargantuan Carmichael coal mine.9

Yet the economic benefits of preserving the coral reefs are beside the point. The Great Barrier Reef is an ancient, unique and irreplaceable ecosystem. Its scientific, social and environmental benefits transcend percentages of GDP. 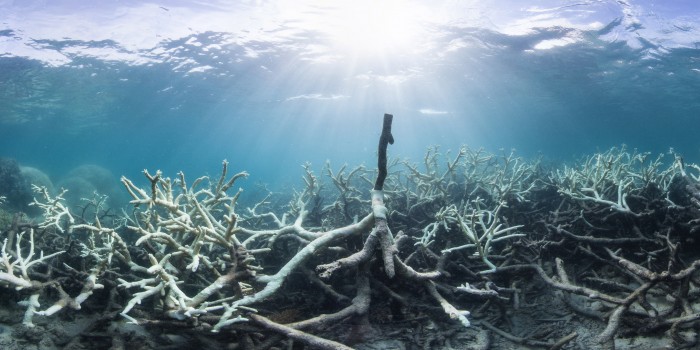 There are numerous Australian campaign groups defending the coral reefs, but sadly the odds are stacked against them, and the bottom line is that, right now, Australia cannot be trusted to look after its own natural beauty. What’s more, it doesn’t even have the excuse of requiring development to lower a high poverty rate, as Brazil does. Australia’s GDP per capita is the 14th highest in the world, behind only tiny oil-producing or money-laundering countries such as Qatar and Luxembourg.10 Carbon dioxide emissions per capita are the 11th highest in the world, and its emissions reductions pledges made for the Paris Climate Summit last year were rated at the low end of “inadequate” by Climate Action Tracker.

Perhaps it is not surprising that a country which has treated its own indigenous people, the Aboriginals, with such contempt11, should see no objection in obliterating another part of its heritage – one of the natural wonders of the world, the Great Barrier Reef.

However, whilst I am clearly taking my anger out on the Australian extractivist-capitalist dogma, it would be wrong to scapegoat Australia for this tragedy. Let us not forget that here in the UK we are disregarding our, already inadequate, emissions targets, opting instead to subsidise North Sea oil and gas, and slashing funding for renewables. Our very own British Petroleum, a company whose research archive we generously host on the Warwick University campus, has been named as the most obstructive company to EU climate change legislation, consistently lobbying against even small measures to spur a clean energy transition.12

The problem is that it has been far too easy to slip into academic debate about climate change and its potential effects on the environment and economy, because it was seen as a future issue. I myself am guilty of this, preferring to engage with the science rather than come to terms with just how much damage we are inflicting on the planet. No longer. We just lost a huge portion of the Great Barrier Reef – it’s happening now.  “My veil is down,” said Professor Marshall, as he broke away from the aloof stance usually adopted by academics. If this isn’t a sufficient wake up call to action, then I don’t know what it will take.

Here is a video filmed on a research trip to Lizard Island, North of Cairns, by Professor Justin Marshall and his team. It was captured a few days ago (April 2016).

This footage was taken a week ago at Flynn Reef, where the beautiful photo in this article was captured.

Joe Rosettenstein is a second year physics undergraduate at Warwick, and science and technology co-editor at the Globalist.