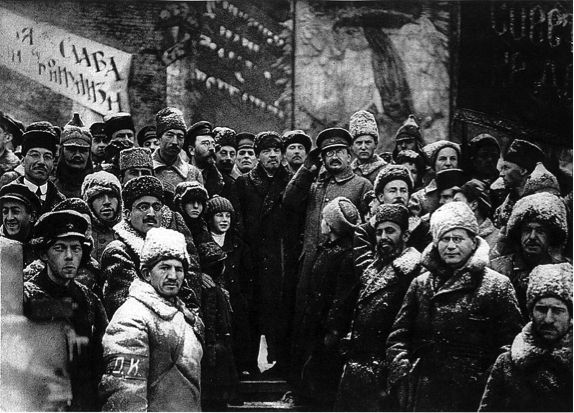 Bolshevik leaders, including Trotsky and Lenin, celebrate the second anniversary of the October Revolution.

The Bolshevik Revolution of 1917 was headed by a core group of scintillating, radical intellectuals, with the heavy lifting left to a volatile mix of thugs, brawny revolutionaries and victims of Romanov rule. This “vanguard” had already violently broken the Tsar’s foul, autocratic hold on Russia, borne upon the heady revolutionary spirit of the time. Lenin and Trotsky’s own variant of Marxist ideology fused utopian ambitions with methods of terror, which succeeded in attracting the support and sympathy of liberal-types and left-leaning parties across the world. Stalin’s rise from the ashes of civil war completed the revolution’s descent into tyranny, collectivisation and the Gulag. Stalinism also heightened the paranoid strain inherent to Communist ideology, leading to a chilling moment in history: the Moscow Show Trials. Members of the Bolshevik old guard were tried in kangaroo courts for “counterrevolutionary” activity, accusation often based on fabricated evidence and “confessions” extracted under torture, and were consequently liquidated (to use an awful political euphemism). 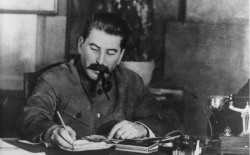 The best novelistic treatment of this episode is Arthur Koestler’s Darkness at Noon which, while never mentioning Russia or Stalin by name, is clearly intended as an account of those paranoid years. Stalin becomes ‘No. 1’, while the Bolsheviks are referred to simply as ‘the Party’. Koestler had himself been a member of the German Communist Party, eager to toe the party line, whose invocations and instructions came direct from Moscow. After years of growing disillusionment, Koestler finally broke with the party following the Hitler-Stalin pact. His account of this act of apostasy (he described his belief in Communism in religious tones) features in the great anti-Communist book, written entirely by ex-Communists, The God that Failed. This collection of six essays attempts to explain how the protean and dialectical logic of communism could enslave and seduce minds as nimble and intelligent as Koestler’s and others, and is an excellent accompaniment to the novel.

In Darkness at Noon, Nicholas Salmanovitch Rubashov, fictional architect of the revolution and ex-Commissar of the People, is now an ageing figure who has betrayed, in the service of the revolution, former friends and comrades. He is himself arrested, imprisoned, and subjected to interrogation by two warders: Ivanov and Gletkin. They want him to sign a confession, admitting that he engaged in counterrevolutionary activity and plotted to murder No. 1.

The genius of the book lies in its treatment of history and ideology; Christopher Hitchens once said that the most remarkable testament to Darkness at Noon’s power is that the case for Communism was put so forcefully that it actually turned some people into communists. The fact that Stalin’s men in reality employed more physical methods of gaining confessions does not diminish the strength of the novel.

Ultimately, the logic that was once Rubashov’s raison d’être appeals to “that mocking oracle they called History” much more than it does to the here and now of the novel. As even Ivanov is prepared to admit: “Every wrong idea we follow is a crime committed against future generations.” The weight of this intellectual load, this moral balancing act, is tersely summarised by Rubashov: “Even he himself was beginning to get lost in the labyrinth of calculated lies, and dialectic pretences, in the twilight between truth and illusion.” Prison gives him a lot of time for reflection; whilst incarcerated, he communicates via code with a Tsarist reactionary in the cell next door to his, and is forced to watch as a broken, former comrade is dragged to his execution. This might have been enough to break the communist spell, but once the intelligent Ivanov is eventually replaced as an interrogator by young Gletkin, the contrast between the old guard and the new proves too much for Rubashov: 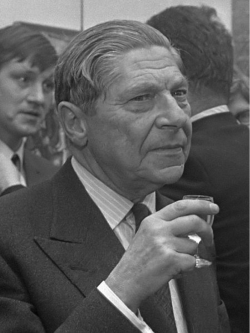 “That was the generation which had started to think after the flood. It had no traditions, and no memories to bind it to the old, vanished world. It was a generation born without umbilical cord… And yet it had right on its side.”

Knowing what was at stake, Ivanov and Rubashov consciously break with the past; Gletkin, on the other hand, was an ahistorical Stalinist bureaucrat.

Darkness at Noon thus becomes a case study in commitment to a cause. The revolutionary is an unusual archetype in fiction, particularly in Russian literature; they actively aspire to be ‘stereotypical’, to completely suppress their personalities and erase all traces of the ‘bourgeois’ traits of compassion and decency. After all, “A revolution conducted according to the rules of cricket is an absurdity.” This is all done in the service of the all-consuming Revolution, spurred on by the Marxist arrow of History. The responsibility of a novelist is to show that this facade is permeable, that brief flashes of personal morality and feeling will always, however subtly, reveal themselves. Darkness at Noon is therefore tragic in the Shakespearean sense, as Rubashov self-diagnoses his fatal flaw: “The old compulsion to think through the minds of others”, and again later, “The old disease, thought Rubashov. Revolutionaries should not think through other people’s minds.” In the end – and this book is obsessed with the tangled relationship between ends and means – this human tendency towards empathy and individualism is something that the Party cannot tolerate, and Rubashov has to go. Those of us on the Left today owe it to ourselves to study the intellectual atmosphere of an era that best illustrates the danger of unintended consequences.