The Borderline: Incarceration and Resistance at Yarl’s Wood Detention Centre

Islam Abdelgadir reports from the Movement For Justice demonstration at Yarl’s Wood detention centre late last year, situating it within the context of the exclusionary narratives that pervade the British asylum system. 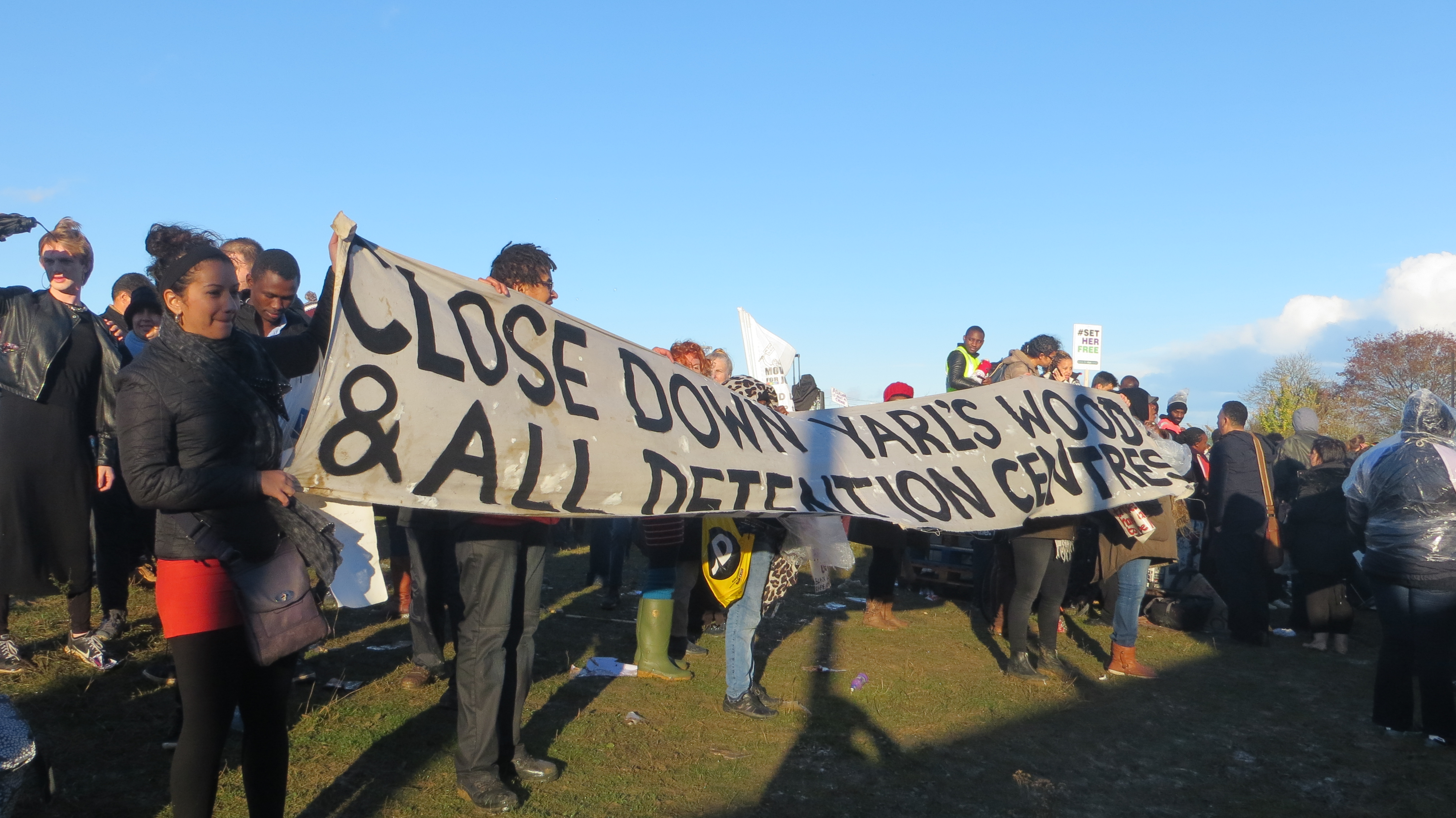 “There are people in detention who should not be there. I went in, I didn’t do anything; so don’t let them think you have done something wrong. You haven’t committed a crime so don’t feel guilty. They are going to try to break you down. Their system is to break you down psychologically. They give you food that is not nourishing enough; they lock you up at certain times…

The one way I came out is because I told myself one day, I said, ‘You know what. These people are not going to win’. You went to them because you wanted justice. They have been unjust…People need to understand that, the UK is carrying out the highest amount of human rights abuses imaginable … But this is a country that prides itself on human rights. They’ve gone out to other countries, destroy them because they want to promote freedom, but yet people are in this country and are not free. How can they preach something that they cannot live by?

So let us shut down immigration detention. Let us fight for freedom!’’1

A crowd of close to 1,000 demonstrators erupts into chorus. They begin to chant: “Shut it down! Shut it down!”

Protesters are gathered outside Yarl’s Wood Immigration Removal Centre on a cold November afternoon in solidarity with the 350-odd women detained inside the facility. Speaking is a former detainee who was taken from his home in Birmingham in May of this year to Morton Hall, a removal centre in Lincolnshire, where he was held for three months.

Today, he captures the attention of the crowd with his speech. Illustrating his own individual experience of injustice, his words echo many of the same themes that concern Webber in her book, Borderline Justice: The Fight for Refugee and Migrant Rights.

A former barrister who specialised in immigration, refugee and human rights law, Webber is also vice-chair of the Institute of Race Relations’ council of management . In her book, she reflects on a legal career spanning over 30 years. She argues that people seeking asylum receive only “borderline justice”; that is, “marginal justice, justice that constantly disappears and has to be fought for constantly”.2

To the former detainee, borderline justice finds physical expression in the walls that enclose Yarl’s Wood. Those on one side parade as bearers of universal rights and freedoms, separated from and set against those on the other side, who must prove that they are deserving of those same, allegedly universal rights.

The former detainee was a victim of an injustice carried out by the United Kingdom’s Visa and Immigration Department. This system of asylum infringed upon his “universal rights not to be detained arbitrarily; access to justice; to fair trial; freedom from double punishment; freedom of movement,” and his human rights of “access to subsistence, shelter and health care”.3

For Webber, the former detainee is representative of one of all too many asylum-seekers oppressed by the “invasion asylum complex,” a concept taken from and similar to Imogen Taylor’s “Revolting Subjects”.4

The invasion-asylum complex refers to the narrative that frames UK public policy and discourse towards our asylum system, the first premise of which is the fundamental belief and acceptance of national borders. What follows is a dialogue discussing how we should react to those who pass through those borders. Do immigrants have the right to work? Do they have the right to housing or healthcare? What claims on the state do these immigrants have? Can refugees and asylum-seeker make more claims on the state than other immigrants? How do we identify these immigrants? What forms of identification must an immigrant have to make claims on the state?

The answers to these questions become contingent on how we view immigrants and asylum-seekers. What is the image that is evoked in the mind when the phrases ‘economic migrant’ or ‘asylum-seeker’ are used? For Webber, it is a caricature driven by populism and colonial attitudes towards foreigners.

‘Economic migrants’ are benefit scroungers, NHS abusers and ticking time bombs. ‘Asylum-seekers’ are going to out-breed us or maintain a cultural divide too large to overcome. They are de-personalised into a morally bankrupt threat to our values and culture. In this way, we can talk of individuals as identical parts of a homogenous whole.

As a threat. As a swarm. As an invasion.

Within this invasion-asylum complex, policy is seen as a form of defence. Methods of identification allow us to easily identify friend from foe, and the native from the foreigner.

These boundaries do not only manifest themselves in the literal, geographical borders that wait at the point of arrival in a country, or the physical borders that separate the detained from the free at detention centres like Yarl’s Wood. These borders have been “brought deep into workplaces, colleges, banks, hospitals, and marriage registries, as immigration status has become determinative in many areas of daily life”.5

Movement for Justice, the campaign group that helped co-ordinate the direct action outside Yarl’s Wood, assist many who go through the asylum process. Some asylum-seekers were present at the demonstration. Meandering through the crowd, they talk about living in a climate of distrust. They are targets of suspicion in the public sphere; mistrusted by the general public, by the government and by officials of the state.

The stigmatizing narrative propagated by media tabloids and reactionary politicians has shrouded these asylum-seekers in an atmosphere of blame. In the public domain, they are held in pre-criminal purgatory, as their very presence bequeaths a burden of proof. Immigration judges become Home Office gatekeepers, as the aggressive atmosphere of bureaucratic hostility distorts their approach towards asylum seekers. As a ex-barrister, Frances Webber describes her former colleagues as all-too-wary of the ‘lies’ of migrants during court cases.

In a detention centre, those detained are suspended in a state of anxiety and fear, uncertain of when they may leave whilst their cases are fast-tracked through legislation. Many look to the Home Office for assistance. They believe that if their claims of asylum are valid then they should pass through the border; they do not see themselves as invaders or abusers.

Yet, to the Home Office, your average bogus-asylum seeker is a conniving opportunist, ready to lie and manipulate information to their advantage. They are resourceful with their assets.  At Yarl’s Wood, women’s bodies are brought to the forefront of the fight. As Yarl’s Wood is a detention centre for women, the staff are careful to consider the concerns of the pregnant detainee, who uses her womb as a weapon; of the sexually abused who uses her gender as a weapon; of the socially persecuted who uses her sexuality as a weapon.

Where is justice if truth is marginalised? A narrative that depoliticises those it claims to assist. They have no legitimate concerns, as they are not legitimate citizens.

In fighting this narrative, several Movement for Justice demonstrators stand outside with placards chanting, “We believe you!” and “We see you!”

“Migrants and asylum seekers are vilified and misrepresented by politicians and the press and subjected to injustice at the hands of officials and judges. Our leaders encourage and treat as heroes those people fighting for democracy and human rights in Burma, in Libya, in Egypt and Syria; those who fight women’s oppression and religious persecution in Iran, Afghanistan, Pakistan, Nigeria. But, as soon as these heroes seek sanctuary here in the ‘free world’, they are transformed into a hostile alien threat to our culture and our values, to be kept out by military patrols and bilateral accords and e-borders and carrier sanctions and all the paraphernalia of modern immigration controls.” 6

The political economy that propagates this narrative is one that links conservative think-tanks like the Adam Smith Institute with private enterprises like G4S and Serco.

“Serco, Serco, what you gonna do?

What you gonna do when we come for you?!” 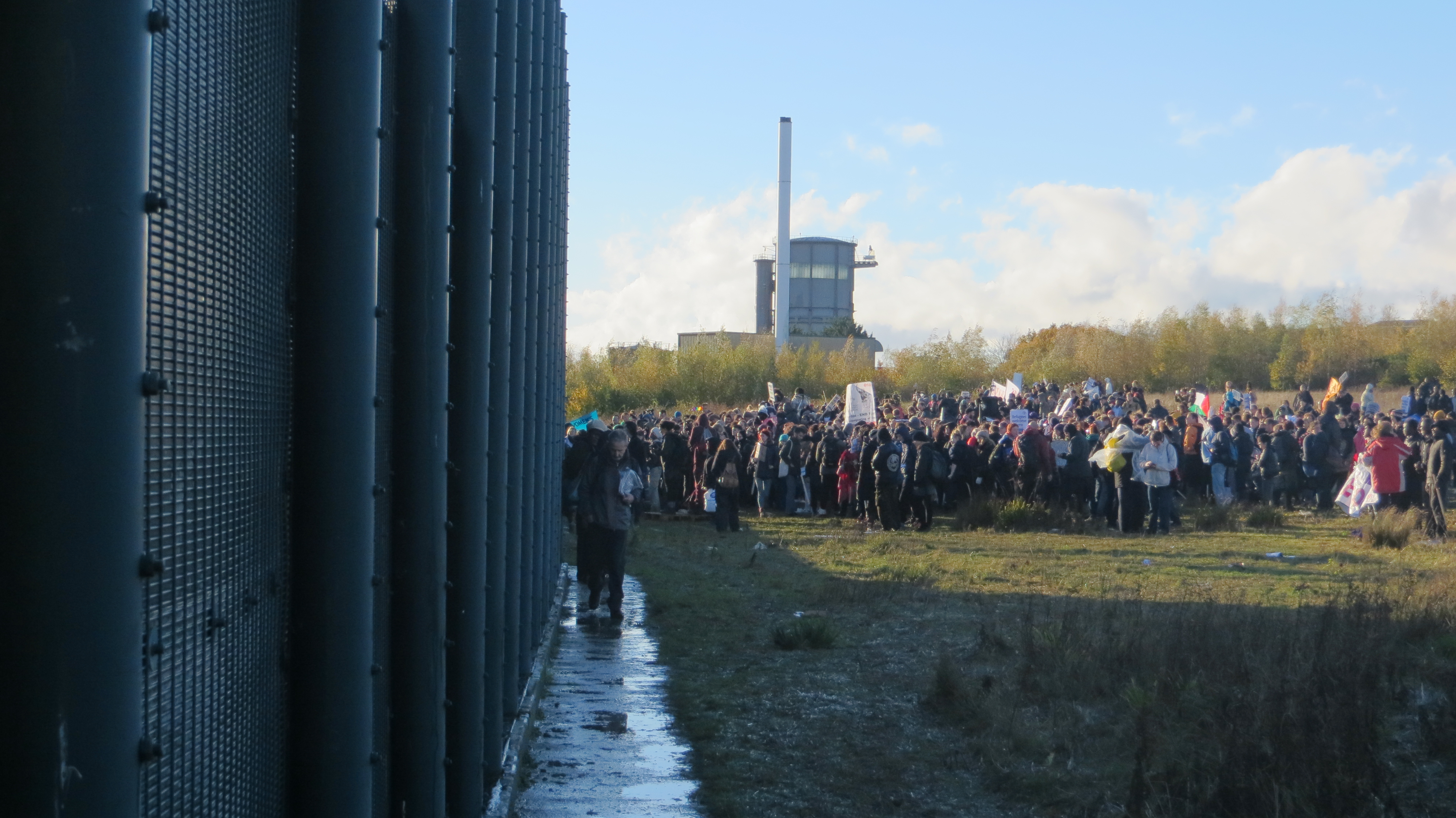 Private Firms like Serco have won contracts to manage detention facilities since 2001. They work on the austerity logic of streamlining costs and ‘value’ for taxpayers. These contracts have not gone uncontested. Charges levied against them include the sexual harassment of detainees who suffered from sexual persecution, a pitiful provision of healthcare and the exacerbation of mental health conditions. Some say that more government accountability only leads to more government failures. Perhaps asylum systems are inherently problematic. Regardless, in a narrative of borderline justice, creeping privatisation blurs the lines of accountability; by delegating power to Serco, the government shirks its responsibilities and avoids unwanted criticism.

There is much political capital to be won by fabricating this narrative. By maintaining the border you create border objects.  You are hence able to transform the asylum seeker into human capital, into objects of labour; and the state creates a resource from which it can capitalise.

Frances Webber argues that every major incarnation of government, from the Conservative Thatcher and Major administrations to Blair-Brown’s New Labour and the Cameron-Clegg coalition, has further developed this narrative, which places migrants in a state of marginalisation through the threat of deportation, enforced destitution and restriction from justice. They are totally denied any political power. Tellingly, even the Yarl’s Wood website doesn’t acknowledge them as detainees. Never on the site is the word ‘detainee’ used, only ‘resident’; they are presented as consumers of the prison system that would obscure them. 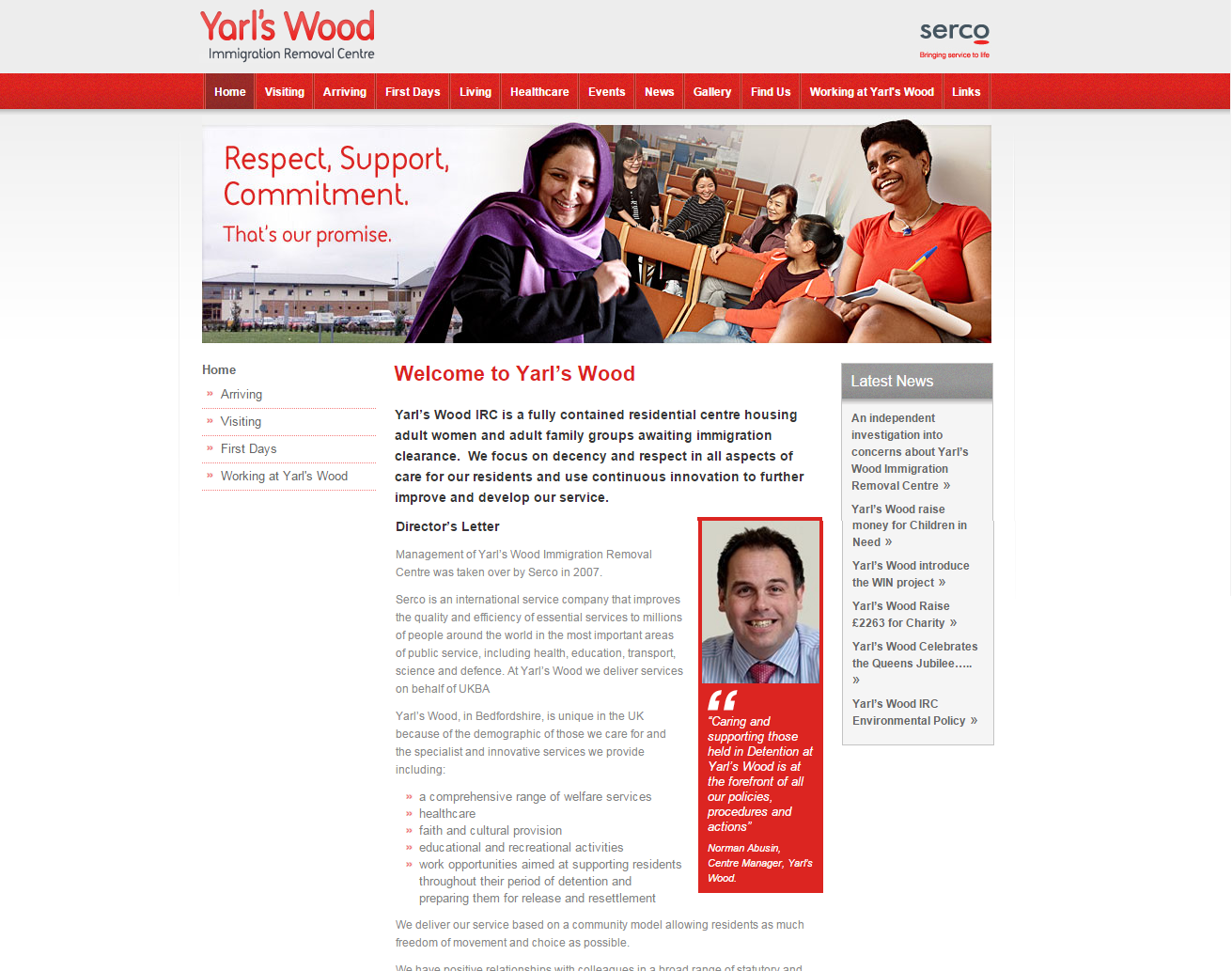 But borderline justice is being fought for, constantly. Frances Webber praises the actions of civil society for fighting in solidarity for justice. Movement for Justice is a perfect example of this. The demonstration is held for the people fighting inside, to sustain the struggle and to build a united movement between inside and outside the centre. Movement for Justice counters the narrative of an asylum invasion complex by amplifying the voices of former detainees; by giving the voiceless a voice, they break down these borders.

“We have to struggle to win!

We have to struggle to win and we won’t let any wall or fence divide us!” 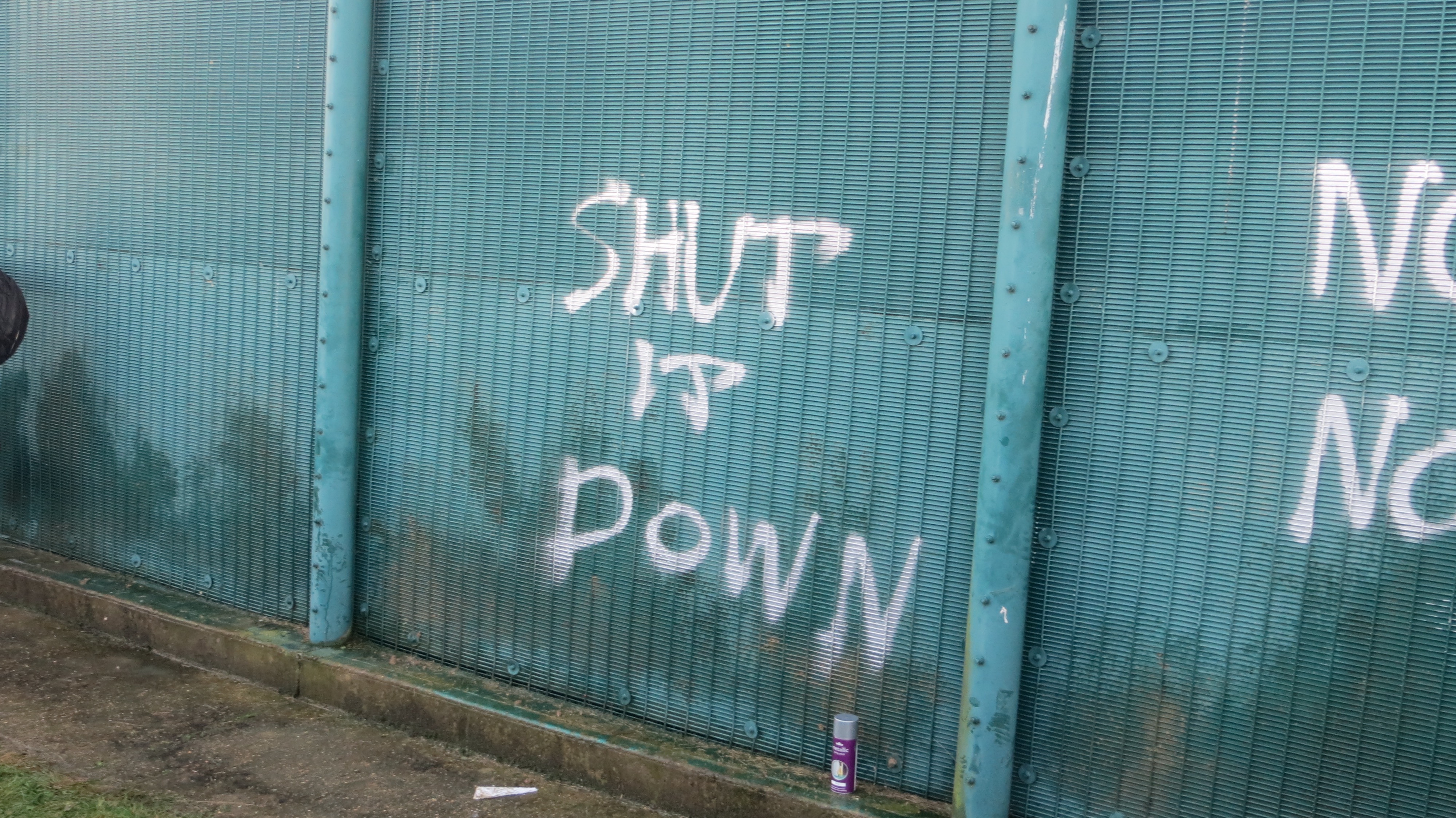 The Movement for Justice is organising another demonstration at Yarl’s Wood detention centre on Saturday March 12, 2016. Details of the event and transport can be found here.

Islam Abdelgadir is a final year PPE student at the University of Warwick, and a member of Warwick For Free Education and Fossil Free Warwick.