Pleasant Island No More: a Cautionary Tale From the End of the World

Tom Harrison, our Science & Technology Editor, looks at the damage humanity can do to its home through the harrowing microcosm of Nauru.

At 21 km2 Nauru is one of the smallest countries in the world. Nestled in the middle of the Pacific Ocean, thousands of miles to its nearest neighbour and with a population of around 10,000, it is truly the end of the earth. The first colonists called it Pleasant Island, such was it’s unspeakable beauty and it’s seemingly limitless bounty.

For decades it had the richest citizens in the world: following independence the nation boomed on the proceeds of massive phosphate mining; required as fertilizer across the world. It was described by many as the Kuwait of the South Seas.

Even at the time this came at a cost. The vast open cast mines were inescapable – even today you can’t look across the island without seeing one. The run off from the mines poisoned the seas – even with the vast ocean diluting rivers of effluent the once plentiful coast has been reduced to a sterile waste. 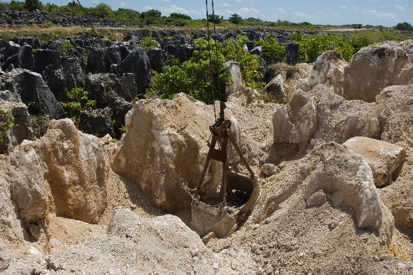 But the price of phosphate soared, the inhabitants barely had to work for their almost endless wealth; many could still remember the backbreaking subsistence lives they had led before, not knowing if they’d have food the next day.

They grew lazy, the government grew corrupt, the phosphate ran out.

They knew the good times couldn’t last forever. The government set up the Nauru Phosphate Royalties Trust, but it was horribly mismanaged and many investments failed abysmally. They financed a musical about the life of Leonardo da Vinci which is considered one of the biggest disasters in the history of London theatre. They built the Nauru Tower in Melbourne, the second tallest building in Australia. It was never even nearly filled.

To the government’s credit, their investments at home were not excessive. They built a hospital and schools, they invested in infrastructure; paved the roads, built sewers and, perhaps most importantly for an island 4,000 km from the Australian mainland, built an airport, cutting the journey time from 20 days to 5 hours.

But there was no income tax, no corporation tax, no VAT; the only revenue came from the mines.

Politicians spent millions on excessive overseas travel and the government set up embassies all over the world, at one point employing nearly 10% of the population. Year after year the government blew the budget, believing the phosphate would last for centuries.

By the 1990s the phosphate was running out and the country had an annual deficit of 10 million AUD and debts of 240 million AUD. Another very real problem was becoming increasingly apparent: they were running out of usable land, and destroying their island. They had to import almost all food, and over half the population had left; as one government minister described it they were “getting rich in a trash can”. 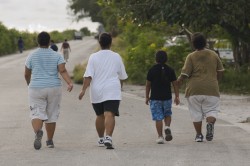 Nauru also had an increasing public health issue. In the course of 50 years the local diet has moved from fish and vegetables to one of high fat, high sugar, heavily processed food, which could survive the long boat ride to the island. This combined with the sedentary lifestyles of people who no longer had to work for a living. The people got fat.

It is by far the fattest country in the world. 95% of the people are overweight. Combine this with a culture that views obesity as a sign of wealth, and the results are harrowing: life expectancy is falling and has been for 38 years. No other country has witnessed such a stark decline.

In 2005, things came to a head. Mining had all but ceased, and confronted with a massive public health bill, the country ran out of money. The Nauru tower was sold off, the island’s only plane was seized and the country’s main power station was impounded. This meant they could no longer supply the island’s desalination plants, at one point the island had just three days worth of water remaining.

“One day when they have salted their last field, killed the last beast and burned the last tree these people will realise you can’t eat money”

With the island cut off, devoid of power and rapidly running out of food and water, Australia stepped in and saved the country from oblivion. They provided the country with aid, paying off its debt. But this came at a cost: the Australians built an immigration detention camp on the old national stadium, initially to house the 438 Afghan refugees rescued in international waters but refused entry to Australia. Soon there were over 1,200 asylum seekers living in the tented encampment. The conditions have been compared to a concentration camp: almost no healthcare provision, water shortages and no education for the children held there. Amid hunger strikes, allegations of sexual abuse and stalled promises of closure, the camp erupted into rioting in July of 2013. To this day nearly 1,000 people remain unlawfully detained on the island with no end in sight.

Nauru isn’t the only country in the Pacific dependent on aid. Many of these island states are dependent on aid to remain afloat; Kiribati, Niue, Tuvalu, Palau; too isolated, too small, too vulnerable, too beautiful. They ask the question: do humans have to live in every corner of this world?

The island’s industrialization and isolation means it is unlikely tourism can revive the country’s crippled economy. 40% of the marine life has been destroyed so fishing is no silver bullet. The government attempted to become a tax haven, but international condemnation and the threat of sanctions meant a quick backtrack amid concerns that the Russian Mafia laundered 70 million AUD through Nauru in one year. With the phosphate depleted it is difficult to see how Nauru can get its economy back on track.

For the Nauruans there seems little hope for their country. It’s simply too small and too far gone. I believe one day the island will be abandoned, left as a warning of human foolishness and greed, a festering wound in the great Pacific.

Tom is a third year Automotive Engineering student and the Globalist’s Science and technology editor.